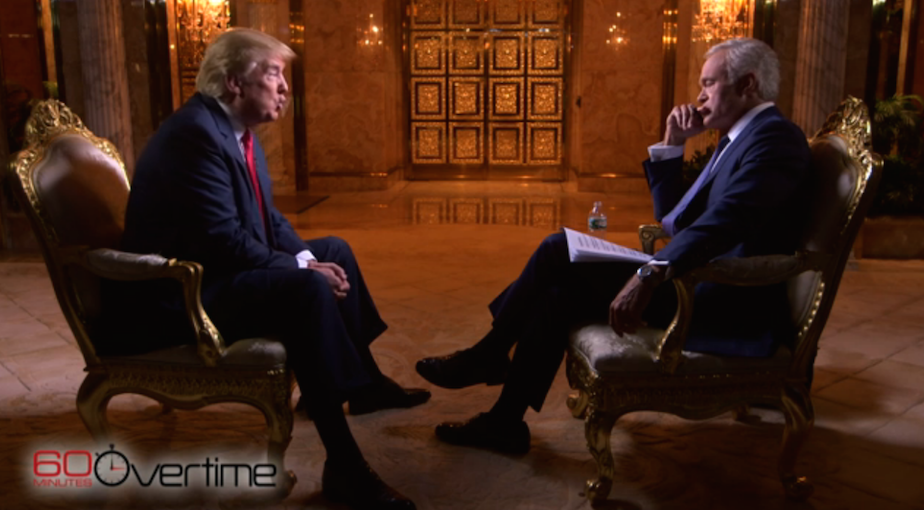 Last night, Republican presidential candidate Donald Trump went on 60 Minutes and spoke with CBS News anchor Scott Pelley. The televised interview lasted about 17 minutes, but CBS also posted extra tape where Trump and Pelley discuss Trump’s immigration plan in more detail. The following is a one-minute clip showing part of that conversation, where Trump claims that he will plan to “round up” immigrants in a “very humane way, in a very nice way.”

At one point in the 60 Overtime video, Trump praised President Eisenhower (“he did this with over a million people, he did it, and it was actually very successfully done”).

For those who don’t know what Trump meant when he praised Eisenhower, the GOP frontrunner was referring to “Operation Wetback:”

The program succeeded in rounding up over 1 million people, most of them men. Just two years before Operation Wetback, the Border Patrol had deported half as many people. This new policy marked the beginning of modern deportation raids and the militarization of the border that we are familiar with today.

The U.S. Border Patrol…carried out Operation Wetback to respond to the unintended consequences of another American policy, the Emergency Farm Labor Program. During World War II, when the U.S. economy faced an acute labor shortage, the U.S. and Mexico established a binational agreement to import temporary workers to harvest American crops and maintain and repair American railroads.

Though the agreement was initially supposed to relieve the wartime labor shortage, American farmers developed a penchant for imported farm workers and had the program renewed repeatedly for 22 years. Between 1942 and 1964 the Bracero Program, as it was popularly known, brought over 4 million Mexican men to the U.S. through renewable six month contracts…

A post from the Texas State Historical Association says that on the first day of “Operation Wetback,” the government captured about 4,800 individuals. After that, about 1,100 people were rounded up on a daily basis.

A post by Richard D. Vogel for the Houston Insitute for Culture shares this about the program:

Mobile Task Force raids began in California in 1953 and moved to Texas in mid-July of 1954. From the Rio Grande Valley, the Task Force headed north to the mid-western states that had sizable Mexican populations. Though Operation Wetback officially targeted only illegal immigrants, many legal residents were caught up in the dragnet and ended up in Mexico just like during the sweeps of the Great Depression. In contrast to the depression-era deportations that dumped the immigrants at the border, during Operation Wetback the INS transported the deportees on busses, trucks, trains, and ships deep into the heart of Mexico in order to make it more difficult for them to return to the U.S. Unauthorized immigrants apprehended in the Midwest were flown to Brownsville and deported from there. Many Mexicans were transported from Port Isabel to Veracruz in crowded and filthy ships. The boatlift, however, was terminated when seven deportees jumped overboard from the Mercurio and drowned. Their tragic deaths provoked a mutiny and lead to a public outcry in Mexico. Deportations dropped off in the fall of 1954 when INS funding ran out.

It is difficult to estimate how many Mexicans were driven from the U.S. by Operation Wetback, but the INS claimed 1,300,000, five times as many immigrants as were displaced during the Great Depression. The San Antonio district of the INS, which included all of Texas outside of El Paso and the Trans-Pecos area, officially reported that it had apprehended more than 80,000 undocumented Mexicans, and officials estimated that an additional 500,000 to 700,000 immigrants in the district fled the country in fear of the Mobile Task Force. The exact toll of Operation Wetback will never be known, but the impact on the Mexican community was destructive. Again, as in the 1930s, families were uprooted and ruined and immigrant communities were destroyed. And again, as during the Great Depression, deportations to Mexico helped defuse the political time bomb of mass unemployment in the U.S. and rescue American capitalism.

4 thoughts on “Trump Says His Deportation Plan Will Be ‘Humane’”