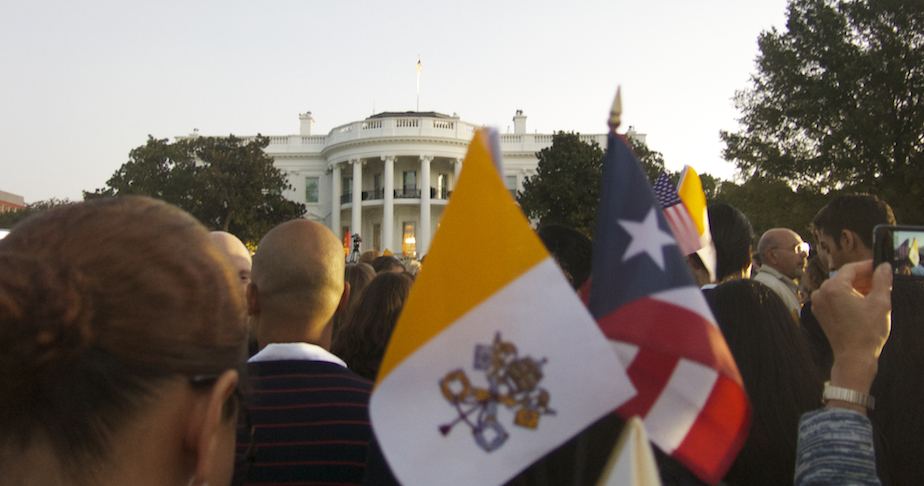 EDITOR’S NOTE: Gretchen Sierra-Zorita, curator of the popular Puerto Rico En Serio online community, submitted the follow op-ed to Latino USA. The views expressed in the op-ed are Gretchen’s own opinions and do not necessarily reflect the editorial views of Latino USA or Futuro Media Group.

Last week Pope Francis conquered America’s heart with his words of tolerance, inclusion, compassion and reconciliation. Thousands, including myself, waited for hours to catch a glimpse of the pontiff. New York City Council Speaker Melissa Mark-Viverito went a step further. She managed to slip the Pope a letter explaining why convicted Puerto Rican terrorist Oscar López Rivera deserved a presidential pardon. She also presented the Pope with a portrait López Rivera had done of him. It is her hope, and that of many Puerto Ricans, that Pope Francis will intercede on his behalf.

I was able to meet @Pontifex, welcomed him to my district, presented him Oscar’s gift & shared a letter re: his case. pic.twitter.com/z0pT6tKqCF

Oscar López Rivera is a controversial figure in Puerto Rico and the United States. He has been called a freedom fighter, a terrorist, a political prisoner and a criminal. Before gaining notoriety, López Rivera was a decorated Vietnam veteran and a U.S. Department of Veteran’s Affairs counsellor. A respected leader in Chicago’s Puerto Rican community, he helped establish a high school, cultural center and halfway house for drug addicts.

López Rivera’s life took a turn when he joined the Armed Forces of National Liberation, known as FALN for its Spanish acronym. FALN was a paramilitary organization fighting for Puerto Rico’s independence in the 1970’s and early 1980’s. It laid claim to over 100 bombings resulting in five deaths and scores of injuries. FALN’s bloodiest attack took place at New York City’s historic Fraunces Tavern, where George Washington said farewell to his officers in 1783. Four people were killed and 60 were injured during lunchtime but no one was ever charged with the crime.

In 1981, Oscar López Rivera was arrested and accused of being one of the leaders of FALN. He was convicted for trying to overthrow the U.S. government (seditious conspiracy), armed robbery, weapons violations and interstate transportation of stolen property.

Had he not been arrested, López Rivera might have been responsible for the maiming and killing of innocent people. But no one should be found guilty for that which he did not do and López Rivera was never charged with harming anyone. None of the Chicago area bombings with which he was associated resulted in death or injury. The bombs in Chicago were placed to cause physical rather than personal damage.

His association with the FALN earned him a sentence far longer than what is given to most violent criminals: 55 years, of which 12 were spent in solitary confinement. This sentence was extended by 15 years when López Rivera tried to escape prison in 1988. He is currently serving his 34th year.

In 1999, President Bill Clinton pardoned 14 FALN members on the condition that they renounce violence. López Rivera rejected the offer primarily because it was not extended to all FALN prisoners. It was rumored that President Clinton’s pardons were influenced by his wife’s decision to run for New York’s U.S. Senate seat The pardons caused an uproar in Congress, and Hillary Clinton publicly criticized her husband’s decision. The issue resurfaced during Hillary Clinton’s recent visit to Puerto Rico and she took a noncommittal position.

It is doubtful that many Nevada voters know or care who López Rivera is, but Cortes Masto is playing it safe. Her knee-jerk reaction underscores how little most Americans know about the colonial relationship that exists between Puerto Rico and the United States, and how it defined a man like López Rivera.

The López Rivera clemency case is one of the few issues where Puerto Ricans of different political stripes agree. The leaders of Puerto Rico’s independence, commonwealth and statehood parties have all petitioned the White House for his release. They are joined in their demand by a diverse group of individuals and organizations including Jimmy Carter, Coretta Scott King, Desmond Tutu and the Congressional Hispanic Caucus. All agreed that López Rivera’s sentence is excessive and that he no longer poses a threat.

Puerto Ricans embrace democracy and deplore violence as a mean to political change. The independence movement no longer harbors terrorist cells. Yet many law-abiding Puerto Ricans, including supporters of statehood, respect López Rivera for his steadfast commitment to Puerto Rico’s independence as a democratic status option.

The Puerto Rican independence movement was repressed, at times even persecuted, by federal and local authorities for much of the 20th century. Political oppression led to radicalization of the movement in the 1950’s and provided justification for splinter groups to engage in subversive activities against the U.S. government which occupied Puerto Rico in 1898. FALN was one of the rebel groups that emerged in the tumultuous 1960’s. In this context, pro-independence supporters often compare López Rivera to Nelson Mandela who fought for the liberation of his country, was considered a terrorist and served a much shorter sentence, 27 years, for the same crime.

During Pope Francis’ visit, social media was rife with petitions for him to intercede on behalf of Oscar López Rivera. Supporters handed a letter to the representative of the Holy See at the United Nations. Leaders of 34 stateside churches placed an ad in New York’s El Diario La Prensa asking Pope Francis to advocate for López Rivera.

Puerto Ricans are aware that if President Obama is succeeded by a Republican president, López Rivera, who is 72 years old, will most likely die in jail. He is the last Puerto Rican to remain incarcerated for taking arms against the U.S. government to free Puerto Rico. All of his co-conspirators have been released and are living peaceful lives.

After 34 years, there is nothing to be gained from López Rivera’s imprisonment other than setting up an example for a revolutionary movement that is no longer interested in waging war. A presidential pardon would be an act of mercy and reconciliation It would also signal to many Puerto Ricans that the U.S. territory, which feels utterly abandoned in its economic crisis, still matters to Washington.

7 thoughts on “Op-Ed: Time to Pardon the Last Colonial Terrorist”