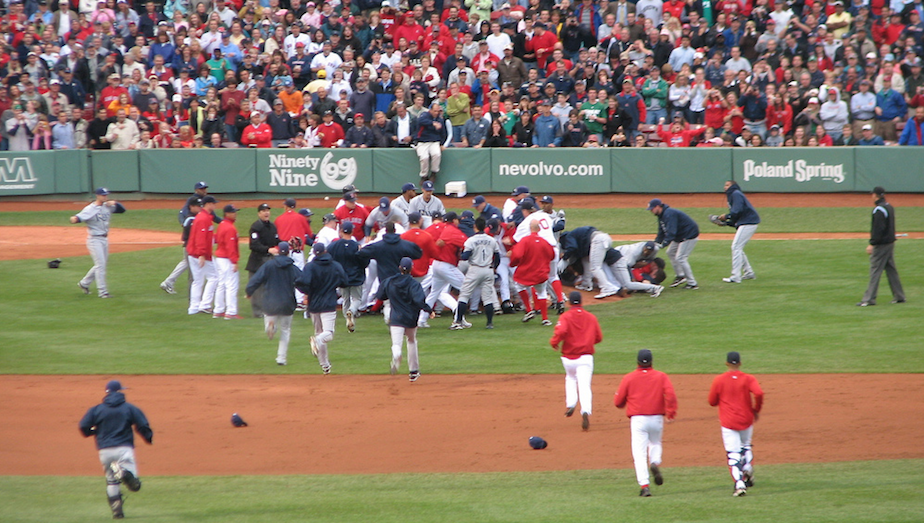 This all started when someone sent me a Deadspin article Wednesday with opinions from San Diego Padres pitcher Bud Norris about foreign-born baseball players. Norris was being interviewed for a USA Today on bench-clearing brawls (you know, when baseball players stop playing baseball and start fighting each other) and whether (wait for it) the latest fights in baseball during the past five years were suddenly more and more racially motivated. This is what Norris said:

“I think it’s a culture shock,’’ Norris said. “This is America’s game. This is America’s pastime, and over the last 10-15 years we’ve seen a very big world influence in this game, which we as a union and as players appreciate. We’re opening this game to everyone that can play. However, if you’re going to come into our country and make our American dollars, you need to respect a game that has been here for over a hundred years, and I think sometimes that can be misconstrued. There are some players that have antics, that have done things over the years that we don’t necessarily agree with.

“I understand you want to say it’s a cultural thing or an upbringing thing. But by the time you get to the big leagues, you better have a pretty good understanding of what this league is and how long it’s been around.’’

You would think that Norris, who now plays for a team just miles from Mexico, should have kept his opinions to himself—does he even know how the Padres have courted Mexicans fans for years?  That’s strike one.

I could also just analyze Norris’ comments about how baseball has changed in the last 15 years and become more foreign (26.5% of all MLB baseball players either on 2015 Opening Day rosters or inactive lists were born outside of the United States) and specifically, more Latin American (if you count only players from that region, it would be 23% of all players in 2015), but players like Norris no longer surprise me.

There have been many examples of American baseball players and sports commentators lamenting how “foreign” the national pastime has become. In 2012, former Chicago Cubs pitcher and ESPN personality Rick Sutcliffe wanted outfielder Melky Cabrera deported for using performance-enhancing drugs. In 2007, Gary Sheffield pretty much concluded that Latin American players were just not as smart as their American counterparts. In 2010, Torii Hunter called black Latin American players “impostors.” And who can forget ex-ESPN Radio personality Colin Cowherd’s anti-Dominican comments from earlier this year? Norris’ words this week in USA Today were just the latest instance of what has become the standard: baseball is dying, so let’s blame the foreigners.

Yet while others are blasting Norris, I wanted to focus a bit more about the actual USA Today article, which I found a bit bizarre. Titled, “Baseball’s culture clash: Vast majority of brawls involve different ethnicities,” reporter Jorge L. Ortiz tells us this: “A USA TODAY Sports study of 67 bench-clearing incidents in Major League Baseball over the past five seasons found the main antagonists hailed from different ethnic backgrounds in 87% of the cases. Just more than half of them —34 — pitted white Americans against foreign-born Latinos. Another four featured white Americans and U.S.-born Latinos.”

The article also included a cool graphic, implying that the latest fighting incidents are suddenly all about “clash of cultures.” I understand that Ortiz’s reporting is valuable to the conversation, but I don’t think having a five-year analysis of brawls in MLB instantly signifies that this is all about a sudden “culture clash” between whites and U.S. Latinos and Latin American players (brief aside: I like to try make the distinction between those Latinos in the U.S. and Latin Americans.)

Call me old-school, but I thought that fighting has always been a part of baseball (cultures have clashed for decades), and Ortiz’s story should have at least given the reader a bit more historical context. The following sentence from his article alone doesn’t cut it: Baseball has long held to a tradition of unwritten rules of etiquette whose interpretation may vary, with factors such as age and country of origin as part of the mix. I was left with wanting more.

Why didn’t the USA Today story add another few sentences? It’s not like the Internet doesn’t have examples of fights during the days when baseball wasn’t integrated or even when it was integrated. In 1932, Yankee catcher Bill Dickey punched Washington’s Carl Reynolds in the jaw as Reynolds crossed home plate. Or what about Ty Cobb and the time when he beat up a disabled fan in the stands in 1911? Those who follow the game will also never forget the 1984 epic brawl between the Atlanta Braves and the Padres: that was one multicultural fight.

In this digital age, you would think that USA Today could have embed a few videos of some of the fights that have happened throughout the years. They aren’t hard to find:

As a kid, I grew up with Orioles legend Mike Cuellar, a Cy Young award winner from Cuba who passed away in 2010. Mike would share so many stories about how white players treated their Latin American counterparts. It was straight-up discrimination and racism. Similar stories happened to the great Clemente. Suddenly this is all a new issue?

Baseball players fight. They have been doing it for a while now, and now that there are more Latin American players playing, there is just a greater chance that they will be in those fights. Is there a new resentment? Is it now all racially motivated? I would counter with this: Hasn’t it always been around? Furthermore, because baseball is so competitive, you just wonder if it is also the heat of the battle that drives these fights and nothing more.

I get that Ortiz’s reporting is important—the way he weaves how Latin American players view baseball is solid. And without Ortiz’s story, we would have never read what Norris said. But at the same time, turning this USA Today story into some special report without giving the piece some more context didn’t present readers with the entire picture. I mean, when Dominican Juan Marichal and American John Roseboro fought in 1965, and Marichal hit Roseboro with a bat, I don’t think it had to do solely with it being a “culture clash” or that Roseboro was black (so is Marichal). This brawl was also about the Los Angeles Dodgers against the San Francisco Giants, two teams who have traditionally hated each other for decades. Baseball players might just fight for other reasons besides cultural or racial differences.

I am not ready to think that suddenly all white baseball players are fearful of losing their jobs to foreign players. Without Latin Americans and U.S. Latinos playing baseball, the national pastime would have died a long time ago, and no one be playing these days. Listen to what we at Latino USA had to say about that earlier this summer:

And if we really want to talk about racial and institutional tension in baseball, let’s focus on the bigger issue, so aptly explained by comedian George Lopez in this video:

That Lopez commentary, I’m sure, is one both Ortiz and myself would agree on.

One thought on “Baseball Brawls Are Now Due to ‘Culture Shock?’”