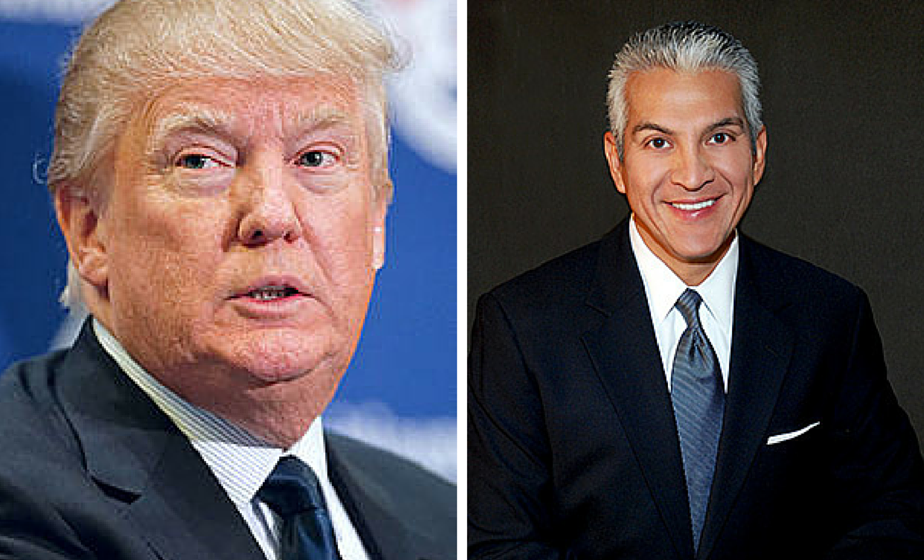 Just days before he had confirmed to participate at an October 8 forum with the United States Hispanic Chamber of Commerce (USHCC), the campaign for Republican presidential candidate Donald Trump announced today that Trump has canceled his appearance, NPR has reported.

In an email to NPR, the Trump campaign said the following:

Donald J. Trump today announced he will not be participating in the October 8th USHCC (United States Hispanic Chamber of Commerce) Q&A, as requested by its President and CEO Javier Palomarez. Mr. Trump will be speaking to a capacity crowd at a campaign rally in Nevada on that date. Additionally, Mr. Palomarez continues to leverage the national media attention surrounding Mr. Trump to benefit his organization and exploit Mr. Trump to enlist additional support and increase interest and revenue in his coalition including asking Mr. Trump to join his chamber for a fee amounting to between $25,000 and $2 million dollars, which Mr. Trump refused to do. Mr. Trump remains committed to reaching out to the Hispanic Community in more genuine and productive ways as he continues to share his vision to Make America Great Again.

According to NPR, the USHCC said that the Trump campaign’s call for a fee was a “lie.”

Trump also told CNN that he had never really agreed to making an appearance: “This is the first time I’m hearing about this. I mean, I never agreed. He wanted me to do an event because he probably can’t sell tickets without me. Why would anybody do an event when he’s a negative person?” The New York Times also reported about the Trump cancellation, but made reference to a Fox News report where Trump had said that the October 8 forum “won’t be that easy of a meeting because you’ll have hundreds of people and they will have constituents of his and they may disagree with me, but ultimately we will all get along.”

It will be my community that will be judge and jury, and what [Trump] does understand, and I made it clear to him, was: he will never see the White House without at least 47% of the Hispanic vote. It’s just ain’t going to happen. And so, I think he is in a quandary now. He’s in a quandary. He’s going to have to kind of pedal back a little bit and figure out what he’s going to do, but the bell’s been rung. Now he’s got to come and account for it.

The NPR story also shared a statement from the USHCC, which said that Trump has now changed his mind:

The USHCC refused to change the format of the forum, show any favoritism, exclude any issues or topics, or grant any immunity from objective scrutiny of his policies. As a result, despite having agreed on numerous occasions, Trump has now reversed his position and has elected to not participate in the Q&A Session — making him the only candidate from either party to do so.

The USHCC statement added: “Withdrawing from the Q&A can only suggest that Trump himself believes his views are indefensible before a Hispanic audience.”

Palomarez and the USHCC were criticized by several chamber members for taking a September 1 private September meeting with Trump, where Trump had confirmed to participate in the October 8 meeting, according to what Palomarez told Latino USA earlier this week. At that September 1 meeting, Palomarez told Latino USA that he did not ask Trump to apologize for his anti-Mexican comments, but that he would ask Trump for an apology at the October 8 forum. Palomarez also told Latino USA that no discussion of fees happened at that meeting, but when Trump offered the USHCC use of a Trump property for a future USHCC convention, Palomarez refused, according to Palomarez:

In his interview with Latino USA, Palomarez indicated that Trump would not get a free pass at the October 8 forum:

And we should not run from a candidate. We shouldn’t allow a candidate to get away with it. If we turn our backs on Donald Trump, we in essence are giving him a hall pass. And then the next guy can come and say whatever he wants, and there is nothing that community will do. That is not appropriate and it is also not the American way.

If you say something about my community, I’ll give you a chance to come explain yourself. And if you don’t, we’ll eat your lunch. It’s just that simple.

The reality of it is: for us to believe that by ignoring Donald Trump somehow he is damaged or that giving him the opportunity to explain himself, somehow he’s legitimized, I don’t see it. The reality of it is: he is a presidential candidate, and the commitment was to allow any presidential candidate an opportunity to talk to our community and explain him or herself. That’s the beginning and the end of it. We’re not trying to legitimize anyone. And I’d like to think that the Hispanic electorate is a little bit more sophisticated than that. I know they are.

Current polls show that 67% of U.S. Latinos have a “negative view” of Trump.

One thought on “Trump Cancels Forum with US Hispanic Chamber”