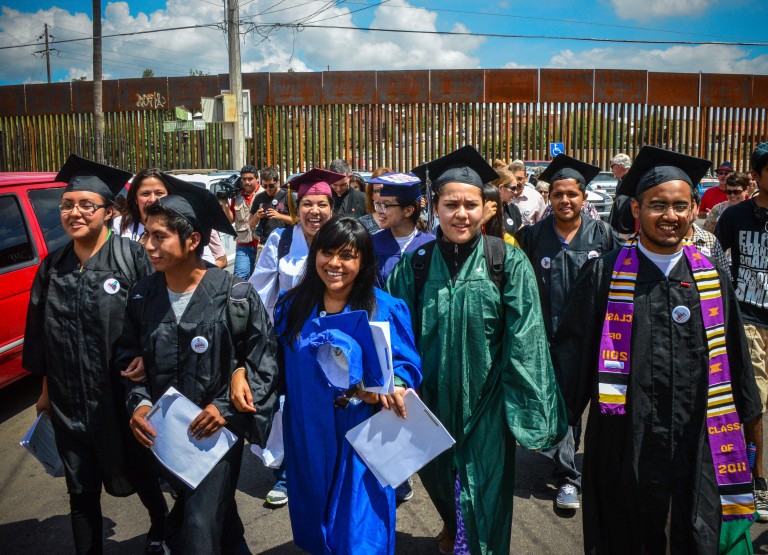 Earlier this year, when my amazing Latino USA colleagues started talking about doing an entire show about the 2013 border action of the Dream 9, it brought me back to the time 30 months ago when I saw a transformative shift in the tactics of the immigrant activist community. As one of the many journalists who tried to shed a rather wide light on the Dream 9 story as well as the stories of other similar actions, revisiting the Dream 9 in 2015 has sent me into an emotional tailspin. First, I don’t think I will ever forget my sense that the story of the Dream 9 (and the consequences of telling such as story in 2013) was an important story.

Immigration reform was dying once again in Congress (timeline). Fresh off his 2012 re-election victory where U.S. Latino voters overwhelmingly supported him, in 2013 President Obama was beginning to feel the stings of the “Deporter-in -Chief” label. Immigration rights veterans were telling younger (and mostly undocumented) activists to stay the course and have faith in the President, the Democrats and the small group of Republicans who believed in crossing the aisle. Immigration reform would pass. Don’t rock the boat.

Then the Dream 9 happened, and everything imploded.

People trolled each other on social media, and the sense of solidarity was lost.

It was this story I (and other fantastic journalists) wanted to chronicle. Looking back now, I wonder if it was all worth it. I don’t know that answer, but I do know this: without the Dream 9, an honest examination of where the immigrant rights movement would go next never would have happened after it was clear that the immigration issue was dead in D.C. At the height of the Dream 9, a lot of events and opinions were swirling everywhere. The debate about tactics got personal and nasty. In a piece written by the now-defunct VOXXI site during the early days of the Dream 9 action, prominent immigration rights lawyer David Leopold said this: “Bottom line, I think this is a publicity stunt that doesn’t do anything to move the ball forward in terms of immigration reform.” Leopold also added: “I just don’t agree with this. I think all it does is draw attention away from the real issue, which is that we do have a broken immigration system and that we do need Congress to fix it.” That led Dream 9 organizer Mohammad Abdollahi to say, “[Leopold] shouldn’t be speaking in the first place. Unfortunately, it’s not his place to say that this action goes too far because he is not undocumented.”

That one story sparked a massive divide on social media between those who supported Leopold and those who supported Abdollahi. It was tough to be anywhere online without being afraid that someone would screen grab your thoughts and share them with the world. The mood felt unsafe and dangerous.

That tension would continue for months, culminating in a document released by Rep. Luis Gutiérrez, where the Illinois Democrat accused Abdollahi and other organizers of manipulation and racism. This occurred during the Dream 30 action, which happened a few months after the Dream 9.

It was perhaps the farthest split I have ever seen in the immigration rights community, considering that Gutiérrez has always been seen as a champion of reform.

Still, while the war of words continued to escalate, the focus on Obama’s record deportations was also gaining ground. The #Not1More movement was also happening at this time. Images of arrests and ICE protests dominated social media feeds.  Those tactics were questioned too. The divisions continued to get uglier.

Yet, in early 2014, the D.C. Latino political establishment started to listen, and in March, Janet Murgia of the National Council of La Raza said Obama was a “Deporter-in-Chief.”  The push for the President to use his executive authority to help more undocumented immigrants was on, and it seemed that everyone in the immigrants community was on board, even though Obama’s delay to act before the 2014 midterms caused some more tension.

Of course, the immigration debate continues on a national level, especially during this election cycle. It is still very politically complicated, but in the middle of 2013, immigration reform was not going to pass in Congress. Undocumented activists took a different path.

The photos in this post show members of The Dream 9 (CREDIT: Steve Pavey, Hope In Focus Photography, www.stevepavey.com)