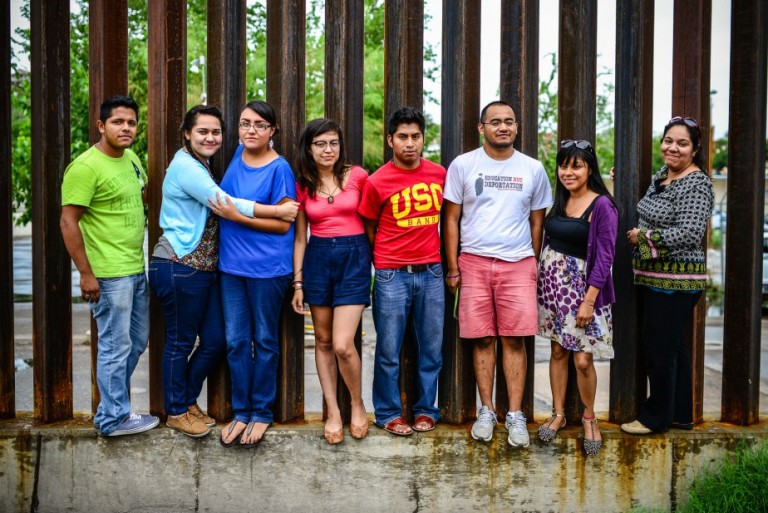 Who are the members of the Dream 9? This week, in anticipation of our newest show, Latino USA reached out to the group. Some members also sent recent photos and told us what they are doing now.

Luis León, 22, was brought to the U.S. when he was 5 years old and grew up in North Carolina. He chose to leave in 2011 after graduating high school when he realized he had no avenue to go to college in the U.S. and lived in Veracruz, Mexico, until the Dream 9 action.

Luis is living in North Carolina working on contract jobs “and helping in and around my community when there are families that also have questions on immigration issues.”

His immigration case is “slowly moving along.” Luis recently had a court date where he turned in his asylum application and is waiting to hear what is next.

“So far I think that it’s going well and I have hopes that in the future good will come out of all of this,” he said.

Claudia Amaro, 29, lives in Wichita, Kansas, and works with families to get parents more involved at their children’s school. She also works in a dentist’s office. Claudia was 12 years old when her parents brought her to the U.S. She grew up in Colorado and California before moving to Kansas at 19.

Claudia’s husband was deported about eight years ago, so she moved to Coahuila, Mexico, to “keep the family together.” She was studying to become an industrial engineer before she chose to participate in the Dream 9. Her husband later joined the Dream 30, and since then he has been at an immigration detention center. Claudia’s asylum case is pending. She has a court date in 2019.

Ceferino Santiago, 23, was 13 when he first came to the U.S. He grew up in Lexington, Kentucky, and was in Oaxaca, Mexico, before going to the border for the Dream 9.

He now lives in the Pacific Northwest and has been in Washington picking apples for work. Ceferino is planning to move back to Kentucky. He is still waiting for his day in immigration court.

Lizbeth Mateo, 31, was 14 years old when she was brought to the United States from Mexico. She lived in Los Angeles for many years. She then spent time in Oaxaca, Mexico, before she chose to leave the U.S. to participate in the Dream 9 action.

She now lives in California and is a student at Santa Clara University. On October 15, Lizbeth applied for DACA (Deferred Action for Childhood Arrivals program).

Lulu Martínez, 25, grew up in Chicago after she was brought to the U.S. as a three-year-old. She was in Mexico City before going to Nogales to become part of the Dream 9.

Lulu lives in Chicago and works at Enlace Chicago as an immigration and legal services coordinator. She hopes to start school at the University of Illinois Chicago in the spring. Lulu’s next hearing date for her asylum case is in April 2018. At that hearing, she will present more evidence supporting her application to be allowed to stay in the U.S.

María Inés Peniche, 24, was 10 years old when she was brought to Revere, Massachusetts. She left the U.S. and moved to Mexico City. That’s where she was when she got the call about the Dream 9.

She is now back in Revere and is working as a community organizer. María is delaying her asylum hearing in hopes that comprehensive immigration reform happens.

Marco Saavedra was 23 years old when he decided to return to Mexico for the Dream 9. He was brought to the U.S. when he was three years old and his family lives in New York City.

When we asked Saavedra about what he is doing now, he said: “I only crossed into Nogales for three days for the campaign. I live in the South Bronx and work at La Morada, my parents’ restaurant. My request for asylum is pending before immigration court.”

Adriana Díaz, 24, was four months old when she was brought to the U.S.

She grew up in Phoenix, Arizona and voluntarily returned to Mexico about a year before the Dream 9 took place. In an email to Latino USA, she wrote: “I am in Phoenix now and currently I am trying to figure out my life and what adulthood means being far from my mom haha… I was always with her. I am living with my boyfriend. My case is still pending right now but I have my second hearing in March of 2016.”

He joined what would have been the Dream 8 at the last minute.