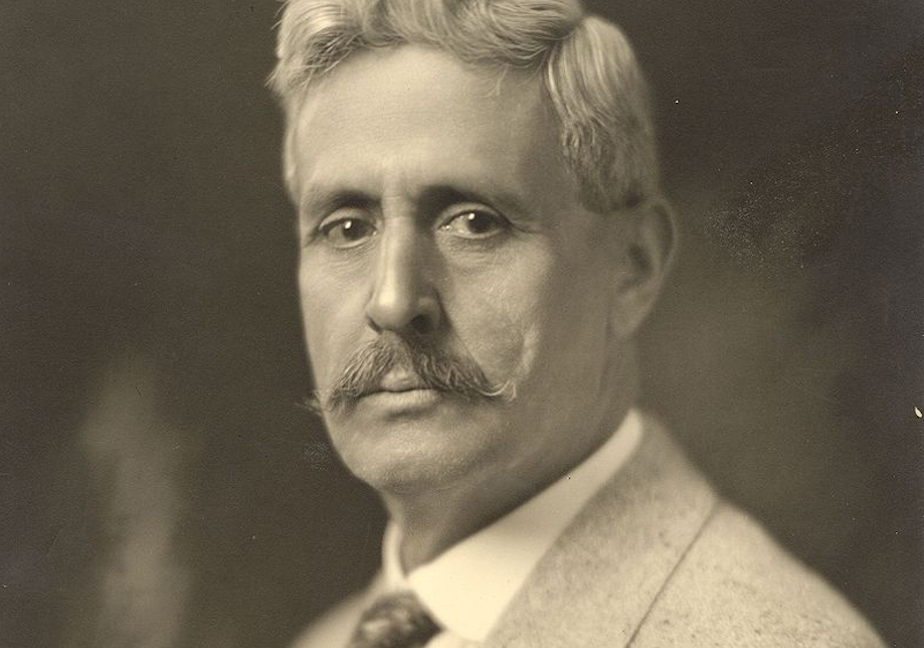 In anticipation of Latino USA‘s upcoming show about the U.S. Latino vote (send us your voice memos), I plan to share daily historical examples of American politics and Latinos. My first post in the series was all about Jackie Kennedy campaigning in Spanish. This is my second post.

Few people know that Octaviano A. Larrazolo was this country’s first Latino senator. Elected to the U.S. Senate in 1928, the New Mexico Republican served two years in Congress, before Larrazolo was too ill to serve. He died on April 7, 1930.

Larrazolo’s story started in El Valle de Allende, Chihuahua, Mexico, where he was born in on December 7, 1859. His biographies indicated that Larrazolo lived an affluent childhood. Four years later, however, his family’s financial troubles began after French troops destroyed the Larrazolo home during Benito Juárez’s revolt. When he was 10 years old, Larrazolo went to study in the United States. The bilingual Larrazolo became a U.S. citizen in 1884, three years after he married his first wife, who died 10 years later. Larrazolo was first a Democrat in Texas, but when he moved into the political world of New Mexico (where the majority of Hispanos favored the Republican Party), it led to greater things—including becoming governor and eventually U.S. senator. In essence, Larrazolo aligned himself with the mostly Anglo Democrats, but when he realized that his voice was not being heard, he thought it would be best that to become a Republican, even though many Republicans were very wary of him. Still, Larrazolo seemed to follow his own beat if you turn to the words he said in 1910 and 1911, when he began to advocate for all New Mexicans during the state’s constitution debate. Here are just some of the quotes attributed to Larrazolo during this time period:

“I do not believe that it is the duty of a citizen to surrender his conscience to any man or any set of men, or to any party of any name If it is true that there are bosses over you and you are not free,“you … have allowed yourselves to be controlled by other men but you will be controlled by bosses only as long as you permit the yoke to rest on you.”

“Every native citizen must unite in supporting this constitution. Why? Because it secures to you people of New Mexico your rights— every one of them; the rights also of your children and in such a manner that they can never be taken away. If you want to acquire your freedom and transmit this sacred heritage in the land hallowed by the blood of your forefathers who fought to protect it, seize your opportunity and do not let it slip through your hands to your lasting regret and that of your descendants.”

This is your opportunity and God only knows when, if ever, it will come again….Do not wait until you are put in the position of Arizona which in two years will be able to disenfranchise every Spanish speaking citizen.”

This excerpt from Larrazolo’s official congressional biography sums up how he was viewed politically:

“Having been cast by both parties as a race agitator, Larrazolo remained nonetheless a powerful influence in state politics. Many Republicans blamed him for the numerous Democratic victories in the first election after New Mexico attained statehood. Though neither Anglo-Democrats nor Anglo-Republicans, nor even moderate Hispanics, liked what he said about ‘slavery,’ ‘bosses,’ ‘freedom,’ ‘war’ and their ‘sacred heritage,’ they could not ignore him. Larrazolo had wide name recognition, spoke eloquently, and was not afraid to break with his party to protect Hispanic civil rights. Though a registered Republican, he campaigned for Hispanic candidates of both parties, among them his close friend Democrat Ezequiel C. de Baca, who became governor in 1916.”

Soon, Larrazolo became governor of New Mexico, serving from 1919 to 1922. Throughout his administration, Larrazolo made “his decisions based on principle rather than on partisan politics.” His biographies concluded that he would upset labor with one decision, but then go ahead and upset the business community. Larrazolo favored the 19th Amendment (women’s right to vote), while most of his party didn’t. In addition, Larrazolo also pardoned 16 Villistas (members of Pancho Villa’s army) for the 1916 attack on Columbus, New Mexico, during the time of the Mexican Revolution: After serving in New Mexico’s House of Representatives, Larrazolo ran for an unexpired term in the U.S. Senate and won with 56% of the vote. In one 1928 newspaper story, titled “Larrazolo Makes Eloquent Plea for Justice for Spanish Race,” the new senator said that while in Washington, he wanted “to keep respected the name and reputation of the Spanish-American people.”

For more about Larrazolo and other prominent Latinos in Congress, see Hispanic Americans in Congress.

5 thoughts on “Country’s First Latino Senator Was a Republican”