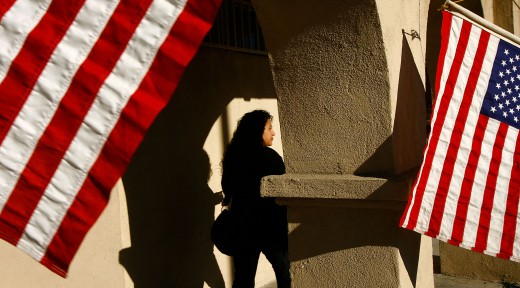 About 26 million Latinos are eligible to vote in the United States and politicians are going after those votes by targeting the “Latino Vote,” a term that used constantly these days.

But where did the term “Latino Vote” come from? And who was the first presidential candidate to court Latino voters?

Latino USA’s Maria Hinojosa and Julio Ricardo Varela talk with Cristina Mora about the past, present and future of the Latino Vote.

Part of the conversation focused on Richard Nixon’s re-election campaign in 1972.

The Nixon campaign strategically courted Latino voters for what was called “the Spanish-speaking vote”, said Mora, a professor of sociology at UC Berkeley.

“What they did is they coordinated these Amigos Buses is what they called them,” Mora said. “They would go around Latino neighborhoods across the United States to try to capture the Latino vote.”

The buses that traveled along the eastern United States in Puerto Rican and Cuban neighborhoods played salsa music, “and those that went to Texas and California played mariachi, so they almost had this nuance understanding of who the voter was and this is really the first time [this happened] you didn’t see the Democratic National Party doing this,” Mora said.

Back then there were fewer than four million Latinos eligible to work. By Election Day 2016 experts estimate there will be 27 million Latino voters, and that number could grow even more.

There are five million Hispanic adults who are in the country legally, on the path to citizenship but who have not become naturalized citizens, said Mark Hugo Lopez, director of Hispanic research at Pew Research Center.

“There’s a lot of efforts to get this particular group to citizenship,” he said.

Many of those legal permanent residents have been in the U.S. for more than a decade but haven’t taken that step to become citizens, Lopez said, and if they do they could “have an impact on Latino voter participation in the upcoming election.”

2 thoughts on “The Past, Present and Future of the Latino Vote”