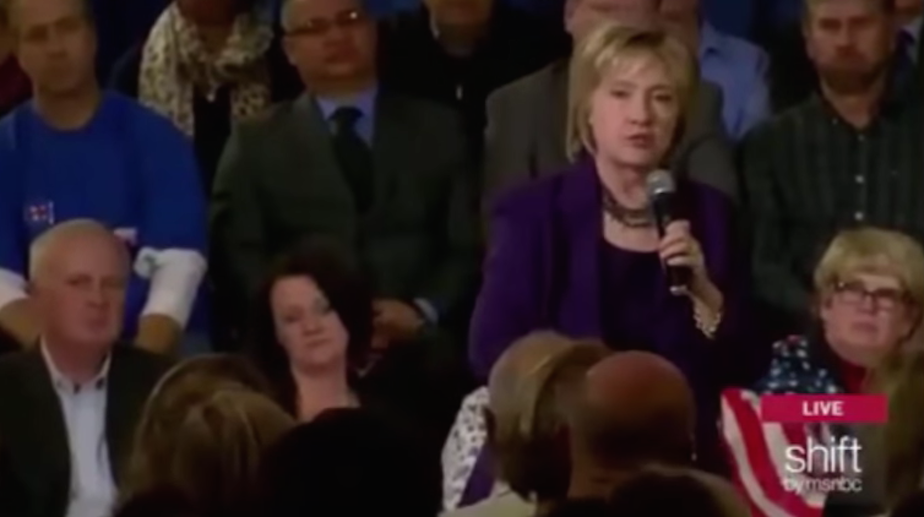 In New Hampshire today, Democratic presidential candidate Hillary Clinton was asked the following question: “Hi, Secretary Clinton, I was wondering what you think about like securing the Mexican border with some of the illegal immigrants that come in? Just wondering.”

America Rising, a political action committee dedicated to opposition research of Democratic candidates, tweeted out a clip of the first part of Clinton’s answer:

This is a rush transcript of what Clinton said:

Well look, I voted numerous times when I was a Senator to spend money to build a barrier to try to prevent illegal immigrants from coming in. And I do think you have to control your borders. But I think that it’s also true that we need to do more to try to number one, deal with the people who are already here, many of whom have been here for decades. Because it is just never going to happen that we’re going to round-up and deport 11 or 12 million. I don’t care how tall the wall is or how big the door is, that is never going to happen. And I think it is an unnecessarily provocative thing to say.

We need to secure our borders, I’m for it, I voted for it, I believe in it, and we also need to deal with the families, the workers who are here, who have made contributions, and their children. Mexican immigration no longer is really the issue. The Mexican economy is doing well enough, we’ve had no net Mexican immigration in the last several years. We now get immigrants from Central America and Latin America. And a lot of them make a very dangerous trip with smugglers and traffickers to try to get in to our country. And we need to do more to try to put some resources into those countries to try to deal with some of the conditions particularly the violence, the drug dealers and the like, that create that.

And we have an example of how effective the United States can be. When my husband was president, as you remember, there was a war going on in Colombia by drug traffickers and insurgent rebels. It was such a violent war that elected officials, business leaders, academics were being kidnapped, many of them murdered, others held for ransom. And we did something called Plan Colombia. Where we helped the government figure out how to secure their country from drug traffickers and rebels. And it took a number of years but now it’s a success story. So we can do more to stop the problem from where it starts. We can do more to secure our border and we should do more to deal with the 11 or 12 million people who are here, get them out of the shadows.

Because we will have a better economic outcome if we do that because what happens now is if you’re undocumented, you will work for as little as you can be paid. And that influences the labor market and takes away jobs from Americans because there’s no even playing field. If we get them out of the shadows and we enforce the labor laws, we will see a much better labor market for Americans and we will also see much more contribution into the Social Security and Medicare system, as well as the taxes. I mean right now we know that undocumented workers pay into the Social Security system, many billions of dollars, but it could be even more. So yeah we have to do all of that and to talk about just one piece of it I think is misleading and doesn’t help us get to where we can solve the problems that we face.

The Clinton comments —which focused on border security, how to address the country’s undocumented population and also made reference to Plan Colombia— are already being talked about in other Democratic circles. The Martin O’Malley campaign released a statement from spokesperson Gabi Domenzain:

It is flat-out wrong to hear Secretary Clinton echo failed policy and sentiments that are more at home in the Republican Party, especially when their field is fueled by intolerance and false hysteria toward immigration.

The Democratic Party must be the Party that embraces New American Immigrants, and that’s just the kind of principled leadership Governor O’Malley has always shown. He understands that the enduring symbol of our nation isn’t the barbed wire fence–it’s the Statue of Liberty.

Disappointed to hear that Sec. Clinton still believes in failed policies of the past & that of the GOP front-runner, Donald Trump. (1/2)

We shouldn't be building fences nor walls. Our Party should be leading the fight to welcome New Americans more fully into our society. (2/2)

Clinton’s immigration answer happened during a town hall event at a high school in Windham, New Hampshire, according to shift by MSNBC:

UPDATE, November 24, 2015: During a Facebook chat with Telemundo, journalist Jose Antonio Vargas asked Clinton to make a commitment and not use the term “illegal immigrants. Here is what Clinton posted on Facebook: 32 thoughts on “Clinton: ‘You Have to Control Your Borders’”