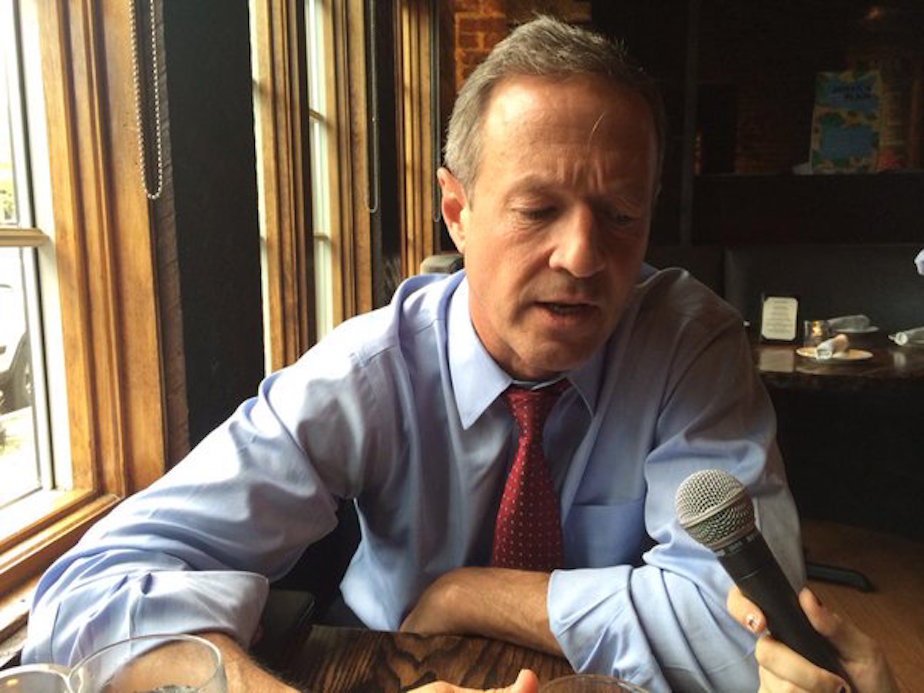 The day after he appeared on a Democratic debate stage in Des Moines with fellow presidential candidates Hillary Clinton and Bernie Sanders, Martin O’Malley made an Iowa campaign stop at a bar in Cedar Falls, where he was asked a question about immigration:

While one questioner did not like [O’Malley’s] immigration reform proposals, worrying about losing jobs and not penalizing law-breaking, O’Malley stressed the outdated policies means there is no “line” for people to gain citizenship and said it’s a falsehood immigrants will cause a loss in jobs.

An O’Malley supporter who was at the Cedar Falls event recorded O’Malley’s complete answer and sent it to NPR’s Latino USA. Here is the clip:

“Look, immigrants do not take our jobs. In fact though, if we allow 11 million people and nobody has a plan for sending 11 million people back. I sat with a family the other day and they have three kids in our country. Two of them came here when they were 4 or 5 years old. A third daughter was born in the United States and that family’s in danger even though they’ve been here for 25 years or 20 years, is in danger of being broken up. Of having those, their parents sent back and having their kids left orphans. So I don’t believe that by breaking up families we make our country stronger. And I know this, when you have people that have to live in the shadow economy, that’s a drag on wages for everybody. When people are on the books that…[applause]

And we have created a bit of a Catch-22. In other words, since we haven’t updated our immigration policy since the 1960s, it’s easy to say, well why don’t they just get in line? But there’s really no line with an ending that these folks can get into. And that’s why we need to reform our immigration policies, upgrade it, make it more modern, and that will allow us then to do a better job of not only controlling our boarders, but of having a sensible immigration policy that has a predictable path to citizenship for those who want to come here, for those that we educate here and now send home, or worse, some of these other policies that are still in place like the 3/10 year bar. So that’s what I’m for.”

The last part of O’Malley’s comments referred to the “3/10 year bar,” an immigration provision many advocates believe should be reformed. As the American Immigration Council explains:

“Most Americans take it for granted that marriage to a U.S. citizen and other family relationships entitle an immigrant to a green card, but there are barriers that often prevent or delay these family members from becoming lawful permanent residents, even if they are already in the United States.  Among these barriers are the “three- and ten-year bars,” provisions of the law which prohibit applicants from returning to the United States if they were previously in the U.S. illegally. Thousands of people who qualify for green cards based on their relationships to U.S. citizen or lawful permanent resident relatives leave the U.S. to obtain their green card are caught in a Catch-22—under current law they must leave the country to apply for their green card abroad, but as soon as they leave, they are immediately barred from re-entering the U.S. for three or ten years.”

The Cedar Falls remarks from O’Malley come at a time where the issues of immigration and entry into the United States continue to dominate the political media, especially in light of the November 13 attack on Paris. Several Republican candidates and GOP governors are asking that Syrian refugees be banned from entering the United States.

On the Democratic side, Hillary Clinton said Tuesday that the United States has always “welcomed immigrants and refugees”  and that “we have made people feel that if they did their part, they sent their kids to school, they worked hard, there would be a place for them in America.” However, some critics are pointing to 2014 comments from Clinton where she said that Central American migrants should be “sent back.” Earlier this year, Clinton clarified her comments, but did not fully change her 2014 position. Sanders this week said that the United States “will not turn our backs on the refugees who are fleeing Syria and Afghanistan. We will do what we do best and that is be Americans – fighting racism, fighting xenophobia, fighting fear.”

O’Malley, who was one of the first high-profile Democrats to call last year’s Central American events “a humanitarian crisis,” continues to criticize Clinton about this topic. The Maryland governor, who trails both Clinton and Sanders, has also reiterated that the U.S. should take in 65,000 Syrian refugees, a number much greater than the 10,000 President Barack Obama is calling for.

One thought on “O’Malley Audio: ‘Immigrants Do Not Take Our Jobs’”