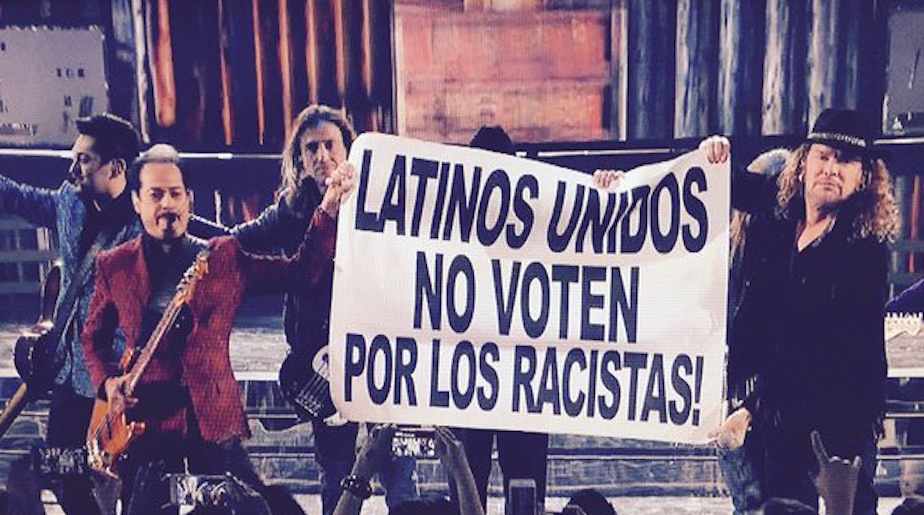 A spokesperson for Maná and Los Tigres del Norte told Latino USA that the legendary bands’ viral protest calling for Latinos to unite and “not vote for racists” during a live performance last Thursday at the Latin Grammys was not directed at Donald Trump or any other presidential candidate, even though some band members told Rolling Stone that it was.

The spokesperson’s emphasis to describe the protest as nonpartisan in nature occurred after Maná’s Fher Olvera explained to Rolling Stone that the decision to use the song “Somos Más Americanos” (“We Are More American”) as “a weapon of protest” was to focus on “what’s happening here with immigration reform and all the xenophobic remarks made by Donald Trump.” Los Tigres del Norte’s Jorge Hernández had also told Rolling Stone that he was “personally offended” by Trump’s anti-Mexican comments.

When the iconic bands completed their Latin Grammy performance with a banner that was captured and shared on social media, many also concluded that it referred solely to Trump. There was also questions as to whether the banner was planned and coordinated in advance by Voto Latino, the nonpartisan organization that promoted the two bands’ appearance before they hit the stage in Las Vegas and then launched a voter registration page minutes after the performance was over, along with an email sent to the Voto Latino mailing list:

Wow! Are you watching the Latin Grammys? If not, here’s what you just missed. Grammy award-winning bands, Maná and Los Tigres del Norte, just surprised the live audience at the 16th Annual Latin GRAMMY Awards in Las Vegas with a powerful joint performance of Maná’s song, Somos Más Americanos.

The two bands then brought out a banner that read, “United Latinos Don’t Vote for Racists!“, calling for the Latino community to unite against the hateful remarks and instead register and pledge to vote in 2016.

Then join the conversation online:

Join @Mana and @tigresdelnorte in urging #Latinos to get out the vote in 2016! Register at: www.SomosMas2016.com #SomosMas2016

Trump’s name (or that of any other candidate) is not mentioned in any of the text pertaining to the voter registration campaign.

According to both Voto Latino and the bands’ spokesperson, the decision to create the banner and the voter drive came from Maná and Los Tigres del Norte. It was not initiated or conceived by Voto Latino. When asked for comment, Maria Urbina, Voto Latino’s Vice President of Politics and Campaigns. responded via email:

Maná and Los Tigres reached out to Voto Latino shortly before their performance, as they wanted to tie their message at the Latin Grammys to a concrete effort to mobilize the community against racist rhetoric and beliefs. Voto Latino’s goal is to engage Latino millennials to register to vote, and we’re excited to partner with Maná and Los Tigres in this movement. We’re also proud to encourage our supporters to share the powerful message Mana and Los Tigres delivered and to take action.

Latino USA followed up to see if Urbina could clarify certain points about the campaign, particularly the one about Voto Latino being, according to its website, “a non-profit, nonpartisan organization” that “does not support or endorse any political candidate or party.” Urbina has yet to respond to any follow-up due to her travel schedule.

In addition, Latino USA contacted Univision, the Spanish-language network that broadcast the Latin Grammys, and asked whether the show’s producers or anyone in the network knew in advance that Maná and Los Tigres del Norte would be protesting during the show. Univision declined to comment.

According to sources, show producers were aware the two bands would display a sign at the end of their “Somos Más Americanos” performance, but no one knew what the sign would say.

One thought on “Spokesperson: Latin Grammy Protest Not Anti-Trump”