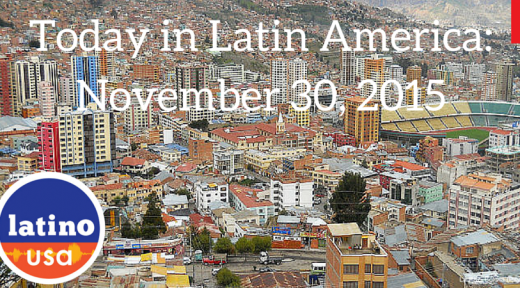 Top Story – As nations begin meeting in Paris today for the 2015 United Nations Climate Change Conference, leaders from throughout Latin America are bringing varying approaches and levels of commitment to the talks.

While the region’s governments have not put forth a unified agenda, the AFP notes that one common theme is the argument that the world’s rich nations should shoulder the burden of cutting greenhouse gas emissions, having already been responsible for most of the world’s pollution.

Mexico became the first developing nation to release a climate plan in March, pledging to cut greenhouse gas emissions by 22 percent and black carbon (soot) by 51 percent by 2030. Critics argue that the cuts don’t go far enough, citing the urgency of a 2013 study that revealed that some 1,700 deaths were likely linked to pollution in Mexico City in one year.

Brazilian President Dilma Rousseff announced at the U.N. in September that the country will cut greenhouse gas emissions by 43 percent by 2030, a commitment that Greenpeace Brazil said was not high enough. Greenpeace’s recommendations — to instead cut 57 percent cut of emissions by 2030 by investing in wind and solar energy, reducing fossil fuel dependence and curtailing deforestation — came shortly before a leading Brazilian scientist said in October that the Amazon rainforest has been so damaged by logging and burning that it is now losing its ability to regulate extreme weather like the drought afflicting São Paulo.

The Andean nations of Bolivia, Ecuador and Venezuela held an alternative “peoples’” climate summit in October, during which they announced a commitment to speak for the “Pachamama,” or Mother Earth, at the Paris climate talks. At the October summit, civic groups proposed, among other things, an environmental justice court and measures aimed at preserving indigenous knowledge.

The alternative movement put forward by the region’s left-wing governments speaks to the complexity of the issue in Latin America. Many Latin American countries are exporters of fossil fuel products like coal and oil, but at the same time the region is especially vulnerable to the effects of climate change.

In a joint op-ed published by The Economist, former Mexican and Chilean Presidents Felipe Calderón and Ricardo Lagos argue that Latin America should present a united front on climate change, calling in particular on oil exporter Venezuela to submit proposals like Mexico’s and Brazil’s.

More than 600,000 protesters in Mexico City, São Paulo, Asunción and elsewhere around the world kicked off the U.N. global summit over the weekend with demonstrations calling for bold action by world leaders. Current climate pledges will not be enough to prevent the rise of global temperatures to 2 degrees Celsius above pre-industrial levels, which scientists have identified as the limit for dangerous climate fluctuations.

Catholic priests in the violent Mexican state of Guerrero are at a particular high risk to be targeted by criminal groups for their advocacy on human rights issues, reports the Los Angeles Times.

The bodies of eight murdered men with a warning message attached to them were found on Friday in Mexico’s Oaxaca state, usually a safe haven from drug violence.

After a family of tourists were exposed to methyl bromide on the island of St. John nine months ago, Puerto Rico is under investigation for using banned pesticides.

In the Dominican Republic, a judge ordered the detainment of a public transportation union leader as authorities investigate his possible involvement in a string of murders and possible money laundering charges.

At least six people in Honduras were killed on Saturday in a gang-related street attack, the third massacre in a week, according to authorities.

Nicaragua deployed a military battalion to its border to Costa Rica on Friday in order to enforce the travel restrictions imposed on the thousands of Cuban migrants stranded there on their way to the United States.

Government officials in El Salvador on Friday condemned the well-known senior Bishop Jesús Delgado, who was suspended from his duties the day before following accusations that he repeatedly raped a girl in the 1980s.

The Guardian shadowed one of the FARC’s few remaining cells deep in Colombia’s jungle in a video that provides rare access to those still reluctant to demobilize even as the revolutionary movement looses momentum.

A tree former Venezuelan President Hugo Chávez planted in his childhood backyard and named “Revolution” has become infested, a fate Reuters likens to the country’s ailing revolutionary socialist fervor ahead of Dec. 6 elections.

Brazil’s health ministry discovered a link between Zika Fever, a mosquito-borne virus from Africa, and a high incidence of micro-encephalitis, a birth defect that can stunt the growth of a fetus’s head and has resulted in two deaths 739 cases, largely in the northeast region of the country.

Paraguayan President Horacio Cartes fired the head of the National Indigenous Institute after a video posted online showed him kicking an Indian woman at a protest.

Brazil will sue Samarco, the mining company that owned the dam that burst on Nov. 5, as well as its co-owners Vale and BHP Billiton, for $5.2 billion for damage.

A mother in Chile said a hospital has restricted her access to her newborn baby, and prohibited her from breastfeeding, because she admitted to smoking marijuana for medicinal purposes.

The Brazilian newspaper Globo on Sunday said it had obtained documents suggesting Eduardo Cunha, the embattled house speaker, took more than $10 million in bribes from the BTG Pascual investment bank, which was seeking favorable legislation.