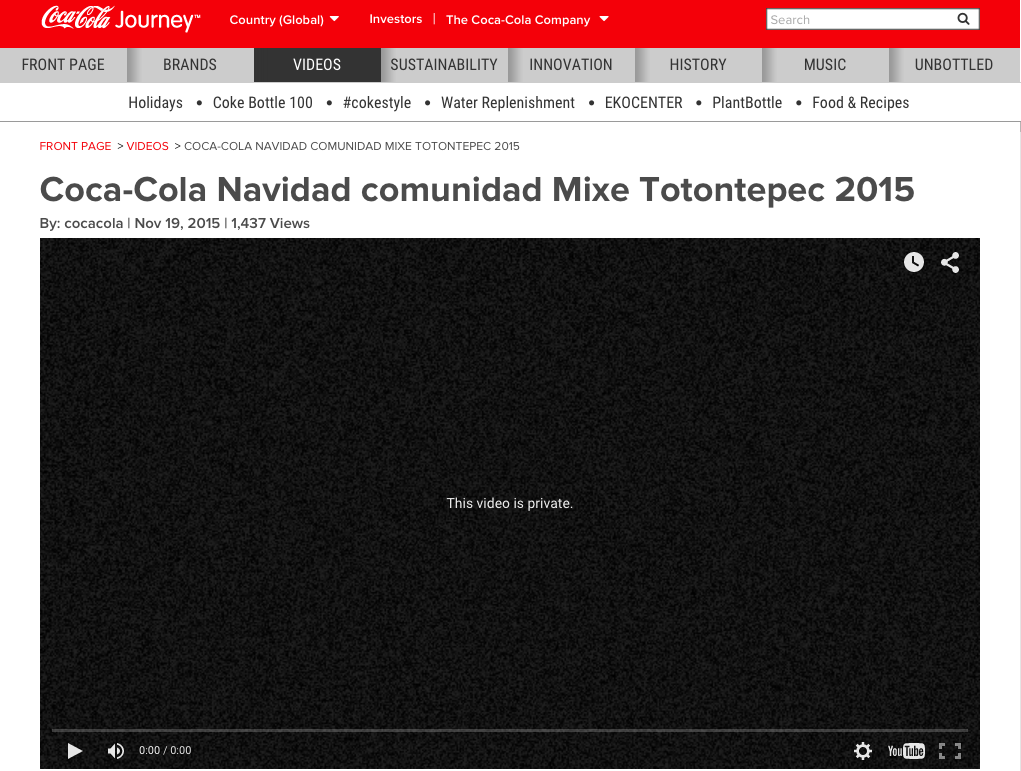 An email was also sent to Coca-Cola Mexico and even though Coca-Cola said it would no longer comment about the ad, a spokesperson for Coca-Cola Mexico did respond to the following request: “Is there nothing else you can add about who did the ad, how it was approved etc? There are reports that the actors in the ad were paid but that the ones from the town were not. Is that true?”

Here is what Coca-Cola Mexico said via email:

The main campaign messages of unity and optimism to leave behind prejudices were well understood and accepted in the focus groups we did. Once we launched this video, we kept monitoring and measuring the public´s response. During this monitoring we realized that the message intended was not understood, so we decided to download it.

Actors were paid and the agreement with the community was to receive a donation.

Coca-Cola Mexico later clarified that the word “download” should have meant “removed.”

After Mexican bloggers, Latino news sites and mainstream media outlets shared the news of a controversial Coca-Cola Mexico Christmas ad showing a group of white Mexican actors building a Coca-Cola product tree in an indigenous community in Oaxaca, a company spokesperson said this afternoon in a statement to Latino USA that it never intended to offend anyone and confirmed that it did remove the ad from its official channels:

As part of Coca-Cola México´s Christmas campaign for this year the video “Mixe Community Totontepec” was launched on digital channels, seeking to convey a message of unity and joy. Our intention was never to be insensitive to or underestimate any indigenous group. We have now removed the video and apologize to anyone who may have been offended.

In nearly 90 years in the country, Coca-Cola Mexico has worked to share messages of unity and friendship to contribute to build a society free of prejudices.

The spokesperson also wrote that the company will not “be providing anything beyond the statement,” even though Latino USA sent questions about how the commercial was made, who approved it, the social media reaction to the video and why the company suddenly made the video private on its company page and YouTube network. Before the Coca-Cola video was made private, several outlets were able to capture it and upload it to YouTube:

According to The Guardian, groups in Mexico had asked the Mexican government to pull the ad down:

“It’s outrageous for the indigenous,” said Diana Turner, a spokeswoman for Consumer Power, one of the groups in the alliance.

In the commercial, the company says the campaign is meant to encourage people to “break down prejudice and share”.

“This Christmas a group of young people decided to give something very special to the indigenous community of Totontepec [Villa] de Morelos in Oaxaca. You, too, open your heart,” Coca-Cola says in the ad.

It says 81.6% of Mexico’s indigenous people feel rejected for speaking a language other than Spanish, though it doesn’t cite the source.

The ad shows young women and men joyously sawing wood, welding and painting before they playfully head off in an El Camino pickup to the eastern mountains of Oaxaca where Totontepec is located. They build a red tree with Coca-Cola lights to the smiles, hugs and appreciation of the locals, who belong to the Mixe community. Across the lighted tree are the words “We will stay united” in the Mixe language.