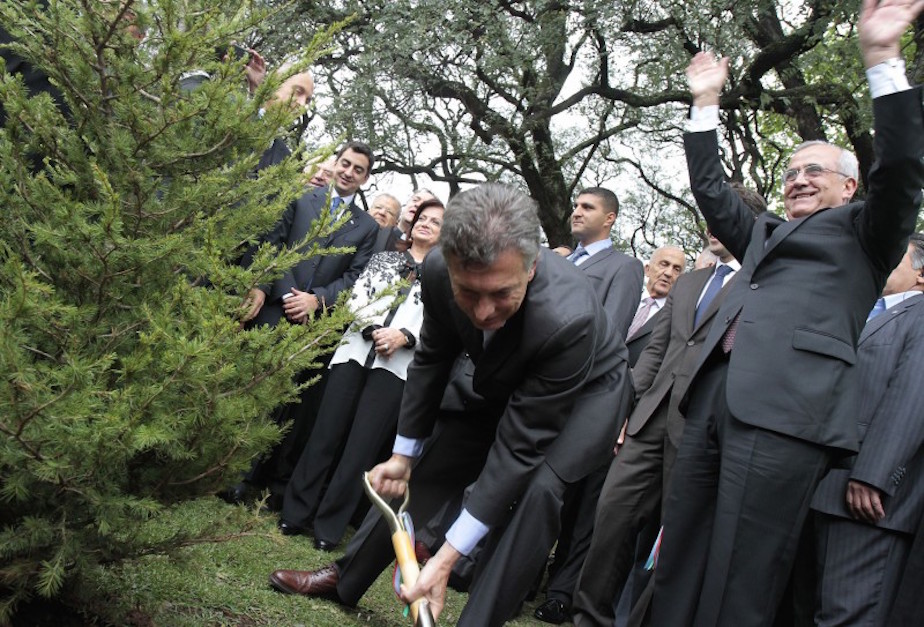 But while the former Buenos Aires mayor and his newly appointed cabinet begin tackling price controls, the deficit and the “black” and “white” (informal and formal) economies in the coming months, a whole host of “green” issues loom large in the background. Deforestation, industrial agriculture and fossil-fuel extraction are just some of the problems facing Argentina, where the perceived economic benefits of such activities have often outweighed their environmental consequences.

Argentina’s commitment to combating climate change has also been inconsistent, earning it an “inadequate” rating from Climate Action Tracker, an independent research organization that monitors national climate plans. The country only generates about 1.5 percent of its energy from renewables, despite a 2006 law calling for 8 percent generation by the end of 2016. Heavy dependence on fossil fuels, coupled with deforestation for soy and cattle production, bring Argentina’s greenhouse gas emissions up to about 0.88 percent of the global total — three times higher than neighboring Chile.

Macri, who campaigned partly on the popularity of his “green agenda” as mayor, as well as promises to diversify Argentina’s dirty energy matrix, will be under close scrutiny from the country’s small but growing environmental movement, who hope the new administration will live up to its green image.

“Macri’s party has been very vocal on the environment,” says Emiliano Ezcurra, executive director of the NGO Banco de Bosques, which promotes conservation in northeast Argentina’s semi-arid Chaco forest. “It’s something they cannot go backwards on.”

Ezcurra says Macri’s administration has no excuse for not dealing with “easy issues” such as forest conservation, renewable energy generation and protecting endangered species. Among other proposals, Macri has promised to double the amount of protected environmental areas from 1.5 percent to 3 percent of the national territory, boost renewable energy capacity and guarantee funding for the Forest Law, which mandates environmental impact reviews and public hearings for all forest-clearing proposals.

“The big question for Macri,” Ezcurra continues, “is how his environmental team will behave in terms of dealing with the hard issues” — practices like open-pit mining, transgenic soy production and feedlot farming. “That’s a big open question.”

The Politics of Extraction

For a nation blessed with an abundance of natural resources and a stunning array of ecosystems, Argentina’s government has shown surprisingly little concern for protecting its environment. Rather, extractive industries have enjoyed enormous popular and political support from administrations left, right and center —including the administration of outgoing President Cristina Fernández de Kirchner— which promoted various mining projects and shale oil and gas exploration throughout the country.

Soy production has also enjoyed preferential treatment under the Fernández administration, becoming a cornerstone of the Argentine economy and a point of national pride. Introduced to Argentina in the 70s, soy took off under the neoliberal government of Carlos Menem in the 90s, spreading north and accounting for much of the deforestation of the Chaco forest bordering Paraguay and Bolivia.

High international demand for soy, particularly from China, continues to drive production today, and export taxes on the crop account for approximately one-third of all government spending. Even neoliberal Macri, who has promised to remove export taxes on all products, won’t touch soy right away, pledging instead to reduce the 35 percent tax by 5 percent each year while the economy presumably finds its feet.

Under Fernández and her late husband Néstor Kirchner, proceeds from oil, gas and soy production funded social programs for the nation’s poor, a paradigm known as “neo-extractivism” common among left-leaning governments in Latin America. This linking of resource exploitation with poverty reduction has created a disconnect between environmental and social movements, drawing the ire of environmentalists throughout the region.

“The Kirchner administration could not make the link with the environmental world,” says Ezcurra. “For 12 years, we basically had no [environmental] policy.” He remains warily optimistic that Macri’s shift away from “kirchnerismo” will create new opportunities for environmentalists to work with and within the government.

However, Kristie Robinson, co-founder of the Argentine environmental non-profit Ambientate, has her doubts that Macri’s environmental agenda will differ significantly from that of his predecessors.

“Nobody is questioning the model; the only question is, ‘What are we doing with the money?’” she says. “With Cristina’s government, and a Scioli government had he won, it would have been, ‘Okay, everything stays the same,’ and there are social programs in place. Macri’s going to cut those social programs. That’s the only difference. In terms of the actual ideas — the extraction, the pillaging of the country, the short-term thinking — it’s all going to stay the same.”

Robinson’s concern stems partly from Macri’s cabinet appointments, announced in November. For one, he has kept on Kirchner’s minister of science and technology, Lino Barañao, a vocal proponent of transgenic soy and agrochemicals. Supporters have heralded the move as a gesture of conciliation to the outgoing administration; Barañao is the only Kirchner-era minister to retain his post. Environmentalists, however, see it as a continuance of the agroindustrial soy model and an open door to agrochemical company Monsanto.

Also stirring controversy is Macri’s appointment of Sergio Bergman as the country’s first minister of the environment. Previously, Argentina had only an environmental secretariat, which all the major candidates promised to upgrade to a ministry. Bergman, however —a rabbi and politician in Macri’s party known more for his religious and social work— has struck many within the environmental movement as a strange choice.

Bergman himself admitted as much last week in an interview with Radio El Mundo, calling his appointment “a great challenge” and stating that he “doesn’t have much technical knowledge in the area of the environment, but more a common sense.”

And then there’s Juan José Aranguren, the newly appointed minister of energy and mining. Aranguren, a former employee of Shell Argentina and its CEO for 12 years, became well-known in Argentina for his confrontations with former President Néstor Kirchner over gasoline price controls. He has publicly voiced support for expanding the nation’s capacity for wind power, stating in an interview with Clarín that “the diversification of the energy matrix is no longer just a desirable objective; it is a necessity.” His past ties with Shell, however — which acquired drilling rights in the Vaca Muerta shale formation in Patagonia this past August — are sure to raise eyebrows.

There’s only so much to be gained from speculation, however, especially given the environment’s traditional status as a non-issue in Argentine politics and the relative novelty of Macri’s Cambiemos coalition. To understand where Macri stands on issues of the environment and sustainability, it’s useful to look at his track record as mayor of Buenos Aires.

Buenos Aires has been a member of the C40 Cities Climate Leadership Group — a network of 78 cities which have committed to reducing their greenhouse gas emissions — since 2005. In his role as mayor, Macri has touted urban sustainability through his green agenda, named “Ciudad Verde.” The agenda is concerned primarily with energy efficiency, sustainable mobility and waste management.

Ciudad Verde has been particularly successful in the area of mobility: since its inception the city has added 140 kilometers of bike lanes, installed 32 bike stations and given away 850 free bicycles through its EcoBici program. MetroBus, a bus rapid transit network inaugurated in 2011, services 113 stations across five lines and 50.5 kilometers. A series of pedestrianized streets have encouraged walking in the city’s chaotic and crowded downtown.

Buenos Aires has also been commended for its progress on waste management, winning the C40 City Climate Leadership Award for Solid Waste Management in 2014 for reducing the amount of waste sent to landfills by 44 percent over the course of a year. By incorporating the City’s large “cartonero” (informal recycler) population into the formal economy with salaried jobs, C40 Cities wrote, Buenos Aires is “fostering greater social participation and transparency in the waste and recycling chain.”

“[The city] basically changed the way they classified rubbish,” she explains. “The Province [of Buenos Aires] inaugurated a recycling plant to handle rubble, which previously the City of Buenos Aires sent to landfill. So the City started sending a bunch of their trash there, which accounted for about 20 percent of the drop in waste. It wasn’t even the city that inaugurated this plant. And the rest of the drop was just reclassification.”

Sources from the City Ministry of the Environment and Public Space disputed this claim in an email to Latin America News Dispatch, noting that approximately 2,540 tons of the city’s 6,000 daily tons of waste are diverted from landfills and treated across four separate recycling plants, as well as urban recycling cooperatives, with plans to construct two new mechanical biological treatment (MBT) plants in the works. They did not comment on the alleged reclassification, however, and recycling records from 2014 were not immediately available for comparison.

“Ciudad Verde is very well-marketed, but I think it’s a brilliant case of greenwashing,” Robinson continues, referring to the practice of deceptively exaggerating a product or policy’s environmental benefits. “[Macri] basically manages to package things in a way where people think he’s actually doing stuff, but there’s no real change on the ground.”

This sentiment has been echoed by environmental groups in the city, particularly over Macri’s failure to begin construction on any of the 78 new plazas he promised in 2014 to deliver over a period of 20 years. Green space in Buenos Aires actually decreased from 2013 to 2014 due to new commercial construction in existing parks — an unwelcome development in a capital city ranked second in Latin America for least amount of green space per resident, according to the Observatory for the Right to the City.

“PRO talks about environmental policy, but their actions tell another story,” City Deputy Hernán Rossi said in an interview with El Destape, using the acronym for Macri’s Republican Proposal party. “Macri tries to cover up his terrible record on these issues through marketing. PRO is completely tied up with real estate, and business interests in general.”

Even accounting for Ciudad Verde’s successes, Robinson expresses doubts that Macri will be able to scale his green agenda to the national level. “The things that have been successful in the city are very much municipal ideas, like the bike lanes,” she says. “He doesn’t have a green plan nationally.”

For activists like Ezcurra, though, who has been involved in the environmental movement since 1985 and has grown accustomed to disappointment, any green talk at all from a presidential candidate is better than none. Still, he acknowledges that for progress to be made, environmentalists will have to continue to lead the fight.

This story was originally published at Latin America News Dispatch.