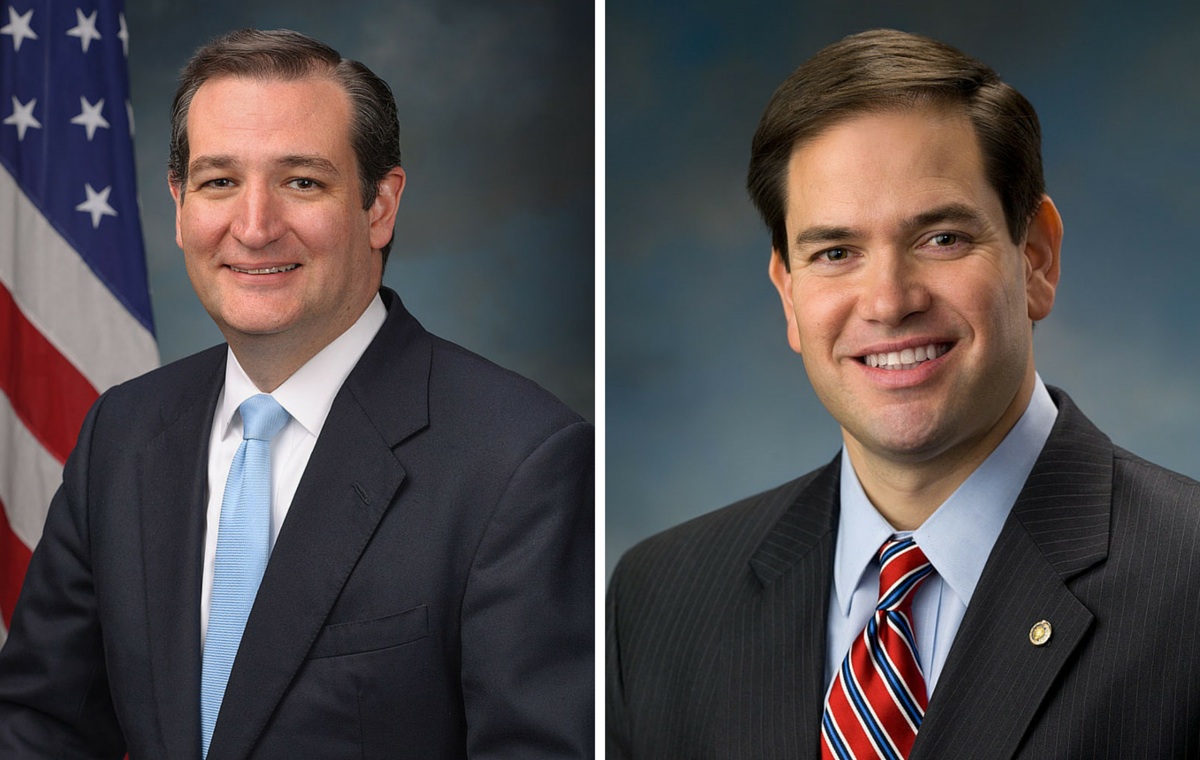 With another Republican debated slated for tonight in Las Vegas, more and more attention is being given to the two GOP candidates of Cuban descent—Texas senator Ted Cruz and Florida senator Marco Rubio. This morning, a Washington Post headline blared, “Liberal Hispanic activists assail Rubio, Cruz as ‘traitors’ to their culture.’ The story, written by Mary Jordan, the newspaper’s national correspondent, told how Democratic-leaning groups such as the Latino Victory Project and community icons like Dolores Huerta put Cruz and Rubio in the same box as Donald Trump when it comes to immigration:

At a Monday gathering in Nevada of Democratic Hispanic leaders, ahead of tonight’s GOP debate in Las Vegas, photos of Cruz and Rubio were plastered alongside Trump’s picture, as all three were criticized as anti-Latino. A press release noted, “While Trump continues to grab headlines with his hateful anti-Latino, anti-immigrant language, the positions and records of the two Latino presidential candidates in the race are equally dangerous for Nevada communities.”

Dolores Huerta, an influential labor leader and civil rights activist, called Cruz and Rubio “sellouts” and “traitors” at the gathering and said the Hispanic candidates “are turning their backs on the Latino community.”

Partisan politics aside, the question remains: Are Cruz and Rubio ‘traitors’ to Latinos or do they just have different views? Latino USA asked several noted Latino politics observers. Here is what they told us:

It’s true that all’s fair in love, war and politics so from a tactical perspective trashing Latino politicians on policy makes sense. However, in a time when so many others are demonizing Hispanics, it’s disconcerting to see our own ripped apart on the basis of their fealty to an amorphous idea of what Latino identity should be. Cruz and Rubio’s politics and policies are fair game, criticize away. But it denigrates all Latinos when some of us decide to become arbiters of what is or is not “truly” Latino. We spend a lot of time telling people outside the Hispanic community to understand that we are not monolithic – we should follow our own advice.

The truth is that Latinos have great potential to contribute to all sides of the political ledger if only those in the GOP would see the greater long-term opportunity in expanding the party message rather than consolidating it with white voters. I think Latino organizations, both conservative and liberal, are right to challenge Cruz and Rubio on their policies, but to suggest that one’s loyalty to identity rest on certain leaders’ assertion of a political test, and to cast accusations of ‘traitor’ should they not pass that test, is no less fascist and dogmatic as the Trump crowd.

Even before all of this activism and partisan campaigning started pointing fingers at Cruz and Rubio, we wrote a couple of stories about the inconsistencies between these two politicians life stories or family stories and their positions on immigration and other issues of interest to most of the Latino voters in this country. We should hold politicians accountable, and not just the Republicans, the Democrats too. All of them. But if these two are going to be a “threat” to democrats by peeling off latino voters, they have a lot of work to do. I am not convinced either of them is a threat at this time. First, there´s an issue of the Republican brand, which is seriously damaged among Latinos and getting worse thanks to continuous demagoguery on immigration and race. Then, there´s the fact that most Latino immigrants in this country are Mexican and these two are Cuban. And Mexicans know that Cubans, even today, still have a privileged immigration status that basically offers legal residency and public assistance as soon as they set foot in the country or come to the border to request refuge status.

Ted Cruz and Marco Rubio are both using extreme rhetoric and backward-looking policies that would be harmful to every American, including Hispanics, by dragging us back to the economic policies that were in place on the way to losing 8 million jobs, to seeing foreclosure signs paper streets all across America, and when hard working and middle class Americans of all backgrounds had to choose between bankruptcy and getting the health care they needed. That both of these candidates are the children of economic and political refugees from Cuba only makes the tone of their campaigns and their tax-cuts for the wealthy economic policies that much more offensive.

We also got some tweets, and as expected, the opinions varied:

@julito77 I see them as pandering to the loudest nativist voices. Utterly disappointing.

@julito77 I guess I do expect more receptivity on immigrant issues from a Latino/a politician.

@julito77 Traitorous toward humanity. I expect more empathy from them bc they come from immigrant families.

@julito77 @LilaQWeaver they have seemed to forget where and why their parents immigrated. The same can be said by many non Latino groups.

@julito77 I say no on the "Latino enough" point, bc we should all be free to hold individual opinions.

@julito77 @LilaQWeaver it's not about being a traitor. That card has been played too much over the years by various groups.

@julito77 @LatinoUSA @marcorubio @tedcruz they are the product of not seeing their parent's stuggle before emigrating. #latinosdisconnected

@julito77 @LatinoUSA @marcorubio @tedcruz gotta call a spade a spade, they're latino in heritage but they are not in mindset or action.

@julito77 Attacking someone's personal identity is never an effective argument. They have the right to their own opinions.

@julito77 It's beyond insulting to attack someone's culture and heritage based on political beliefs! Latinos aren't monolithic.

A similar debate occurred on Facebook. Here is what Joe Laughon said:

To me people who use terms like “traitor” are playing dangerously close to white supremacist rhetoric of “race traitor” that used to be thrown around in the American South, Germany or South Africa. Furthermore it denies a desperately needed robust political disagreement among Latinos as to how to better our community. “Traitor” is the cry of someone who wants to shut down debate for their own aggrandizement.

Cruz is Latino only in name. Rubio is playing the Latino card because GOP is a diversity desert. In order to be a traitor, you have to have an actual following to betray. Neither of them have a meaningful Latino following.

I have 2 observations: 1) Ted Cruz and Marco Rubio are both “Latinos”, whether people like it or not. Their family roots are in Latin America, therefore, they are Latinos. There’s not “one” way of being Latino/a, and we have to embrace that diversity. 2) they’re perceived as “traitors” because their concerns don’t line up with the majority of US Latinos/as, who tend to be underprivileged in general terms. This mostly reflects a class rift. Their attitude isn’t surprising, it happens all the time, the difference is that they’re on the spotlight, thus we get a chance to criticize them. Pan-Latino unity is situational. Maybe if their circumstances and social position were different, their ideas might have aligned better with the majority of people who define themselves as Latinos/as.

Finally, this is what Carlos Flores said:

I don’t agree with some of their policies… but that doesn’t make them any less Latino than me, or any other Latino. The “No true Scotsman” fallacy or in this case “no true Latino” is weak rhetoric that doesn’t speak to the issues.

What do you think? Tweet me your thoughts to @julito77 or add your comments below.

9 thoughts on “Are Cruz and Rubio ‘Traitors’ to Latinos or Do They Just Have Different Views?”