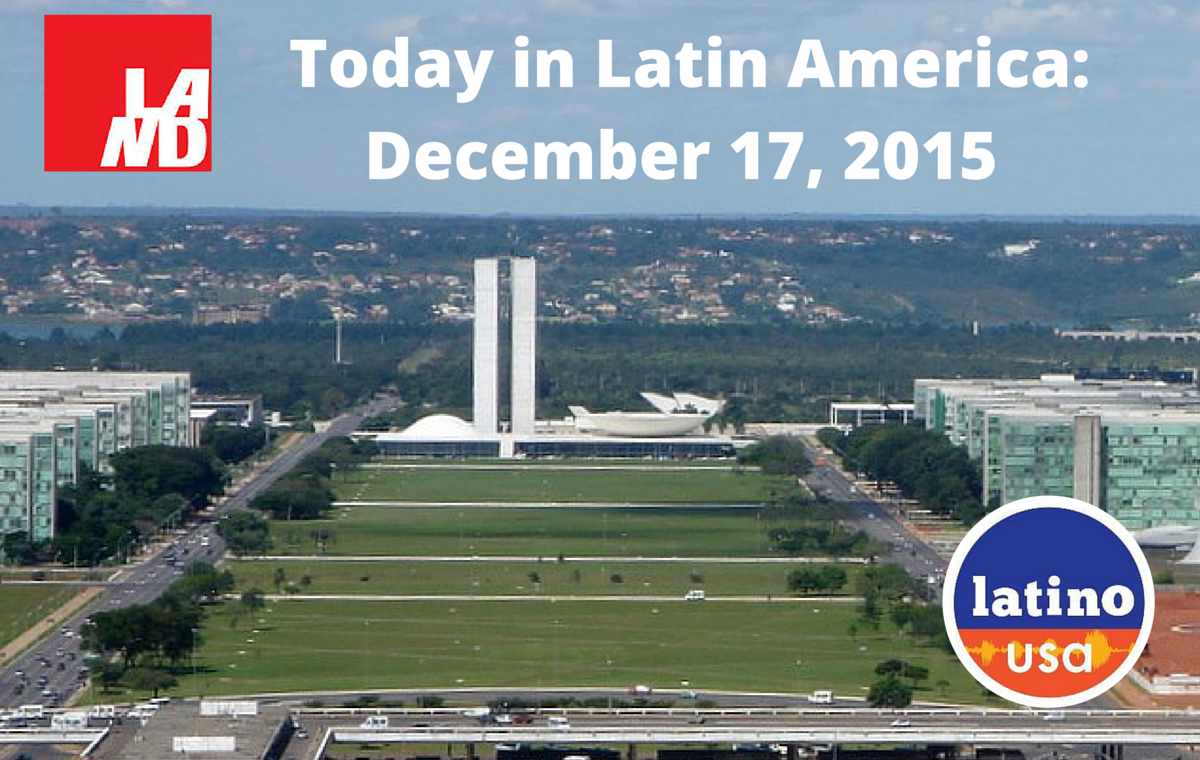 Top Story — Brazil’s attorney general on Wednesday called for the Supreme Court to remove House Speaker Eduardo Cunha from office, arguing Cunha has used his position to obstruct a series of corruption probes against himself.

Cunha, who himself initiated impeachment proceedings against President Dilma Rousseff on Dec. 2, faces charges that he was linked to a kickback scheme at the state oil firm Petrobras.

In his written request to Brazil’s Supreme Court, Attorney General Rodrigo Janot argued Cunha has used his position to “embarrass and intimidate fellow deputies, witnesses, lawyers and civil servants in an attempt to stall investigations against him,” according to a statement posted on the Attorney General’s website.

Cunha is accused of accepting at least $5 million in kickbacks in connection with a corruption scheme at Petrobras. Brazil’s federal police searched Cunha’s residences in the capital Brasília and Rio de Janeiro on Tuesday, the same day that the ethics committee of the Chamber of Deputies, which Cunha presides over, authorized an investigation into whether he lied about the existence of Swiss bank accounts in his name.

Speaking to reporters on Wednesday, Cunha described Janot’s request for his removal from office as a “smokescreen” to divert attention from the impeachment proceedings against Rousseff, asserting the millions of dollars found in his Swiss bank account were procured legally.

Cunha has emerged as Rousseff’s main rival in government, having left the government coalition between his Brazilian Democratic Movement Party and her Workers’ Party in July. At the time, Cunha accused Rousseff and Janot of conspiring to rope him into the widening Petrobras probe, which has ensnared key members of the Workers’ Party as well as some of Brazil’s most prominent businessmen since it was revealed in March 2014.

North America
Mexican activists say they have evidence of three instances in which private railroad security guards killed migrants attempting to ride freight trains to the U.S. border, and additionally that five migrants were killed by police in recent months following the Mexican government’s efforts to crack down on immigration.

A Mexican national who owns two newspapers was sanctioned by the U.S. Treasury Department Wednesday for alleged links to the Los Cuinis drug trafficking organization.

Mexico City’s trendy Roma and Condesa neighborhoods have been affected by violence in recent days, shattering the illusion the upscale districts are immune from crime.

Caribbean
A funding bill approved by the U.S. Congress on Wednesday does not include any direct debt relief for Puerto Rico, despite calls that the U.S. territory should be allowed to file for bankruptcy.

Haiti’s last sitting senators have called on President Michel Martelly and the electoral council to suspend the publication of final election results, scheduled for release today, until an independent commission can officially audit the contested vote.

The United States and Cuba have agreed to restore regularly scheduled commercial flights within months, which if confirmed would be the biggest business deal between the two countries since they announced a year ago today they would seek to normalize relations.

Central America
The United Nations’ highest court ruled that Nicaragua must compensate Costa Rica for establishing a military presence in a disputed waterway.

The gunmen behind the murder of Honduran football star Arnold Peralta on Dec. 10 have been identified, according to Honduran officials.

El Salvador’s foreign minister expressed concern over the recent influx in the number of unaccompanied minors crossing the U.S.-Mexico border, arguing that if the root causes of migration are not soon addressed there could be a repeat of the 2014 border crisis.

Andes
The Colombian Supreme Court on Wednesday dismissed the conviction against ex-military officer Alfonso Plazas in a 5-3 vote, finding that there was not enough evidence to prove his involvement in the “disappearance” of 12 hostages during an infamous guerrilla raid in 1985 on the same court’s building.

Newly-elected Venezuelan lawmaker Marialbert Barrios defies the stereotype of an opposition politician, having grown up in poverty in Caracas in a family loyal to former President Hugo Chavez, Reuters reports.

Southern Cone
An Argentine radio journalist said in an interview with the Associated Press Wednesday that he and his family were attacked in his home outside of Buenos Aires by assailants who suggested he halt any future reporting about drug trafficking, highlighting Argentina’s often-overlooked and growing public security challenges.

A Brazil Supreme Court justice said Wednesday that the impeachment committee stacked with opponents of President Dilma Rousseff is legitimate, the first voice to come from the court, which will vote on the controversial committee Thursday.

The Argentine Finance Minister Alfonso Prat-Gray announced Wednesday an end to currency controls for the peso as part of new President Mauricio Macri’s comprehensive economic reforms, a key departure which has many bracing for a potentially painful devaluation.

A Brazilian court ordered cell phone service providers on Wednesday to block for 48 hours the use of the Facebook-owned messaging service Whatsapp, used by 93 million Brazilians, allegedly because the service failed to comply with an order to turn over data relevant to a drug investigation.