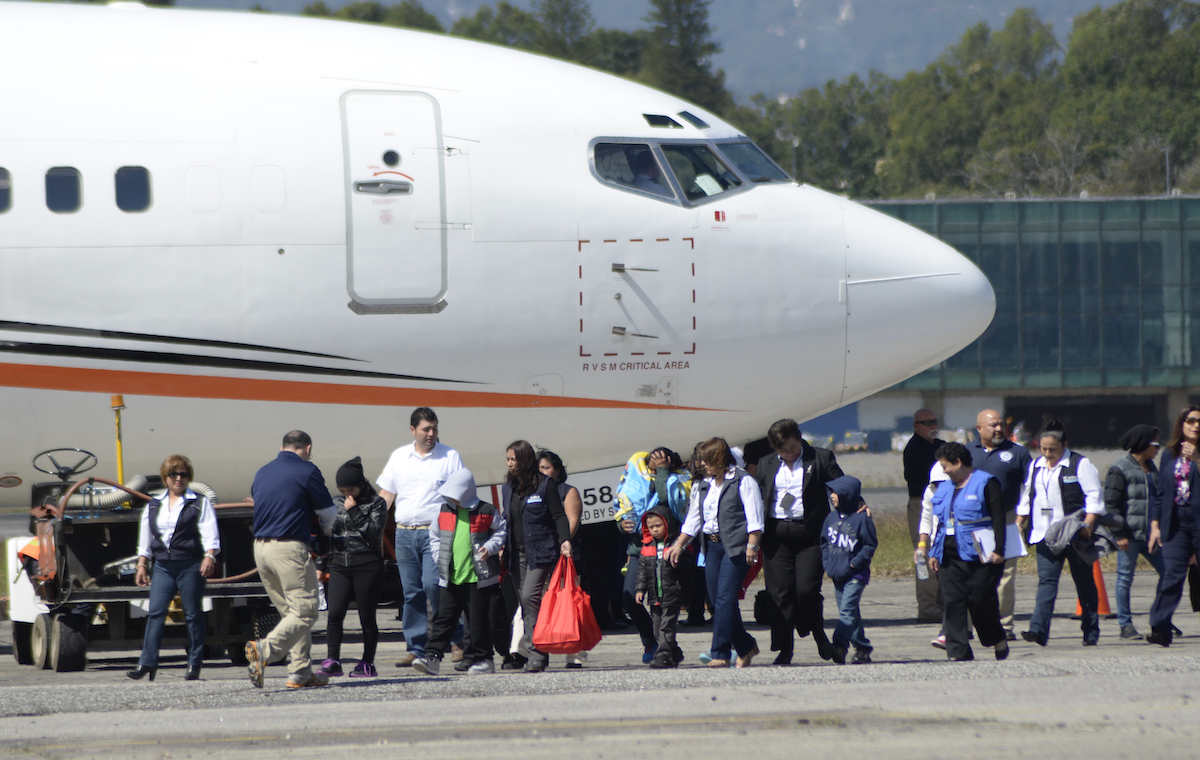 Even though the deportations of 12 Central Americans were paused yesterday, other deportees are being returned to their home countries. Today, Guatemalan deportees arrived at the air force base in Guatemala City.(ORLANDO ESTRADA/AFP/Getty Images)

The Associated Press reported last night that the deportations of 12 Central Americans from four families have been “temporarily halted,” after a successful appeal by lawyers was presented to the Justice Department’s Board of Immigration Appeals (BIA).

This afternoon, the National Immigration Forum issued a statement about the BIA’s decision, which involved individuals detained in the Dilley, Texas, facility:

Their deportations had been scheduled for this morning, but the BIA granted emergency stays of deportation while their asylum cases are appealed.

“Our interviews revealed that these families have bona fide asylum claims, but were deprived of a meaningful opportunity to present them at their hearings in immigration court,” Katie Shepherd, Managing Attorney for the CARA Family Detention Pro Bono Project, said in a statement.

The CARA project has met with families held at a detention facility in Dilley, Texas, and reports that many “did not understand the legal process or their right to appeal a negative determination by the immigration judge,” among other concerns.

News of the Obama administration’s decision via the Department of Homeland Security to conduct deportation raids of Central Americans who arrived in the U.S. after 2014 has been met with criticism by immigrant rights groups. In statement about the BIA ruling, Ali Noorani, executive director of the National Immigration Forum, said the following:

The BIA’s decision recognizes the shortcomings of Homeland Security’s approach. The administration must do more than give lip service to due process. The Department of Homeland Security is making decisions based on a political strategy to send a message. The only message those fleeing violence and persecution should be hearing from the U.S. is that their asylum claims will be considered in accordance with the rights and protections we hold dear as Americans.

According to Politico, several Democratic leaders have also spoken out against the Obama administration. Illinois Rep. Luis Gutiérrez called it a “cruel reminder of a discredited policy,” while New Jersey Sen. Robert Menéndez said, “As we begin to get more details on these operations, let’s not overlook the devastating effect and cost to spending our limited DHS funds on deporting women and children and not violent felons.”

Despite the pause in the deportation of the 12 Central American individuals, a local January 5 report from Honduras confirmed the first 115 Honduran deportees from 2016 had already arrived in San Pedro Sula. The report went on to say that 85% of those deportees were male, and that more deportations would be occurring, including those of 21 minors and 16 mothers. Reports from other parts of Central America said that deportees are also being returned to Guatemala and El Salvador.

One thought on “AP: Deportations of 12 Central Americans Halted”