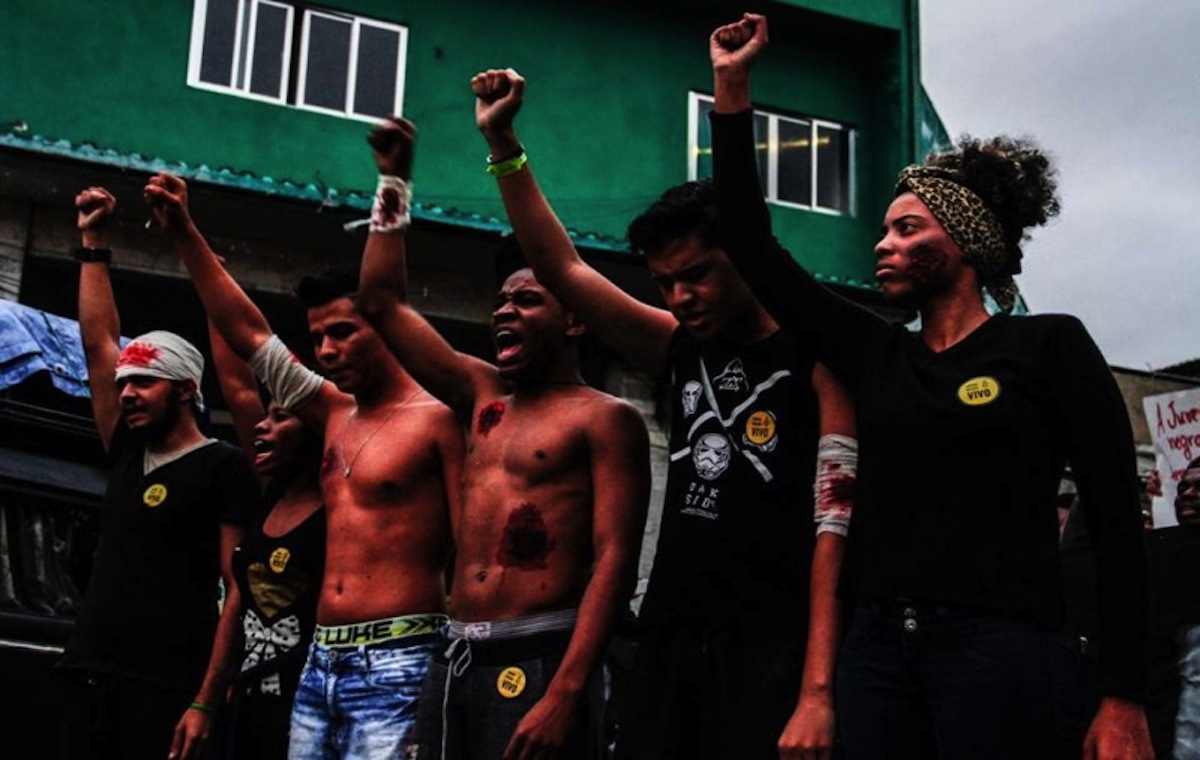 RIO DE JANEIRO — After celebrating 16-year-old Roberto de Souza Penha’s first paycheck on a late November night, Souza and his four friends were shot to death in their car while passing a military police patrol in Rio de Janeiro. As the black youth were driving back home, police allegedly fired on their car over 111 times, the bloodshed taking place just minutes away from the friends’ homes in the Morro da Lagartixa favela where they grew up.

Community members poured out into the streets that very night to protest the killings. With many protests following those next couple of days, there were high tensions around the city. Activists organized and went to several locations with posters, megaphones and strong spirits, chanting, “Homicide will end, if not, the city will stop!”

The black youth had been out celebrating and had bright futures with interests in learning English, engineering and even participating in the military, according to their family members. While the police claim that Souza and his friends opened fire on the officers, the family members of the dead view the killings in a different light. “This was an execution,” Souza’s father said at the time.

According to statistics from Amnesty International, the majority of victims killed by police between 2010 and 2013 in Rio were black men between the ages of 15 and 29. Police in Rio often justify these deaths by reporting them as cases of auto de resistência, or “resistance followed by death.” A classification created in 1969 during the Brazilian dictatorship, declaring auto de resistência allows police, if they feel threatened, to use lethal force without further investigations.

This past year, however, police killings have sparked a number of protests in Rio de Janeiro and across Brazil, denouncing racism and what some protesters have gone so far as to call the “genocide” of Brazil’s black communities. With black empowerment marches and protests gaining momentum in 2015, these police killings and similar ones have started a black power movement similar to the U.S. Black Lives Matter movement — though smaller in size — along political and racial lines.

“The historical relationship between the police and black communities is marked by extreme violence, criminalization and constant human rights violations,” said activist Ana Luiza Monteiro in an email interview with Latin America News Dispatch. “There is a war against the black and the poorest areas in Brazil.”

Monteiro was one of the principle organizers of the “Protest Against the Massacre of Black Youth” on Dec. 4 in Palacio Guanabara, and she says the Black Lives Matter movement has served as inspiration and motivation for the black power movement in Brazil. “People here in Brazil were impressed with the frequency of protests that occurred [in the United States]. With such alarming statistics in Brazil, there are still fewer protests that are less frequent compared to the U.S.”

Activists, though, are hoping that the growing focus on police violence will help the burgeoning movement grow, leading to greater police accountability. “The role of the activists is to give visibility to the situation and pushing for the police to be tried fairly and pressing the state to have another public security policy”, said Monteiro.

Following the November killings, for example, one officer was detained for fabricating evidence after allegedly planting a gun at the scene; three other police officers were detained for the murders of Roberto de Souza Penha, Cleiton Correia de Souza, Carlos Henrique do Carmo, Cleiton Correa de Souza and Wesley Castro, all under the age of 25.

Latin America News Dispatch reached out to the Policia Militar do Estado de Rio de Janeiro, who stated in a press-release style response that the officers are currently in custody in a prison in Niteroi, Rio de Janeiro, and will be tried in both civilian and military courts.

More recently, however, two cases involving the Policia Militar have further inflamed the growing movement. On Dec. 23, two young boys were killed in crossfire between the Policia Militar and armed community members in the famed Cidade de Deus favela. Then, just days later, eight military police officials were arrested after being accused of the torture and sexual abuse of four boys on Christmas day in the north of Rio de Janeiro. The youth were coming home from a Christmas Eve party in the ritzier southern part of the city when they were allegedly stopped by a Pacifying Police Unit . The youth said they were burned, tortured and threatened.

According to Dr. Alves, he believes that the violence and displacement of black communities that occurred in the build-up to the 2014 World Cup parallels today’s preparation for the 2016 Olympics, implicating more killings.

The spotlight of the Olympics, however, also presents an opportunity for the movement to strategize the international gaze on Brazil and bring these issues to light.

4 thoughts on “Amid Police Violence Against Brazil’s Black Population, a Protest Movement Grows”