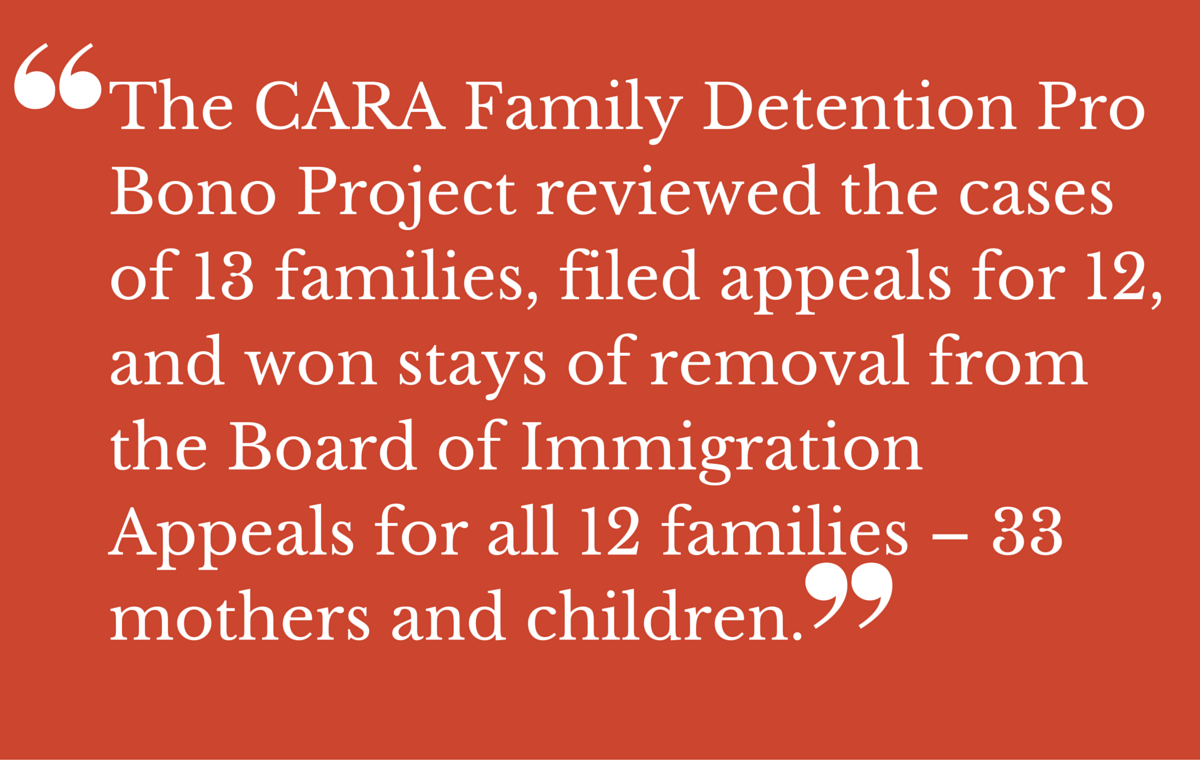 This afternoon, Latino USA received the following information from the CARA Pro Bono Project, a partnership of the Catholic Legal Immigration Network (CLINIC), the American Immigration Council (Council), and the Refugee and Immigrant Center for Education and Legal Services (RAICES). We decided to publish the press statement in its entirety:

In the last week, 121 mothers and children were brought to the South Texas Residential Family Center in Dilley, Texas, after being rounded up by Immigration and Customs Enforcement (ICE). The CARA Family Detention Pro Bono Project reviewed the cases of 13 families, filed appeals for 12, and won stays of removal from the Board of Immigration Appeals for all 12 families – 33 mothers and children. While this is a major victory for these families, the troubling fact remains that many, who very likely also had claims for relief, were swiftly deported without the chance to consult with CARA staff or volunteers. The 12 families for whom CARA obtained stays were fleeing extreme domestic violence or targeted for recruitment, kidnapping, assault, or extortion by transnational criminal organizations.

We now call on the Obama Administration to release the families confined at Dilley pending their appeals. The continued detention of these children and mothers violates well-established law regarding the treatment of immigrant children, as reflected in the Flores Settlement Agreement. CARA Managing Attorney Katie Shepherd explains,

“Under Flores, the government may not hold children in unlicensed, secure detention centers like Dilley. The children should be released immediately, with their mothers, as the law requires. The plight of these families, victims of ICE’s recent raids, highlights more pervasive problems with our immigration system. The Obama Administration’s troubling approach toward refugee families needs to be rethought, beginning with the immediate closure of its current family detention centers.”

The CARA Project team served as the last hope for these families. Their successful stays of deportation raise serious concerns about the glaring due process violations that deprive bona fide asylum seekers of a meaningful opportunity to present their claims. Every single mother for whom the CARA Project filed an appeal had been denied due process in one or more ways, including:

Cases thrown on a “rocket docket,” leaving no time for their attorneys, if they were able to secure legal representation, to compile the evidence required;

Lack of information on what the process was and what their obligations were;

Arrest and detention after they had cooperated with every single requirement ICE had mandated.

The government’s decision to round up Central American families over New Year’s weekend and its refusal to disavow such aggressive enforcement tactics against vulnerable mothers and children continues to reverberate across the United States and beyond. President Obama must fully acknowledge that these families deserve humanitarian protection rather than punishment. The Obama Administration has consistently refused to recognize and treat these families as refugees and has erected enormous obstacles again and again in an effort to deter future asylum seekers. This is a shameful choice that contradicts our own laws and our history as a nation of immigrants.

CARA looks forward to receiving details from the government regarding plans to partner with the United Nations to assist refugees fleeing Central American violence. But, in order to live up to our country’s values and principles, real solutions need to be sought and implemented for those fleeing violence who reach our borders, including meaningful access to counsel and full due process, as well as an immediate end to family detention. Additionally, the administration should immediately protect this vulnerable population from deportation by granting humanitarian parole, Temporary Protected Status, or another form of relief.