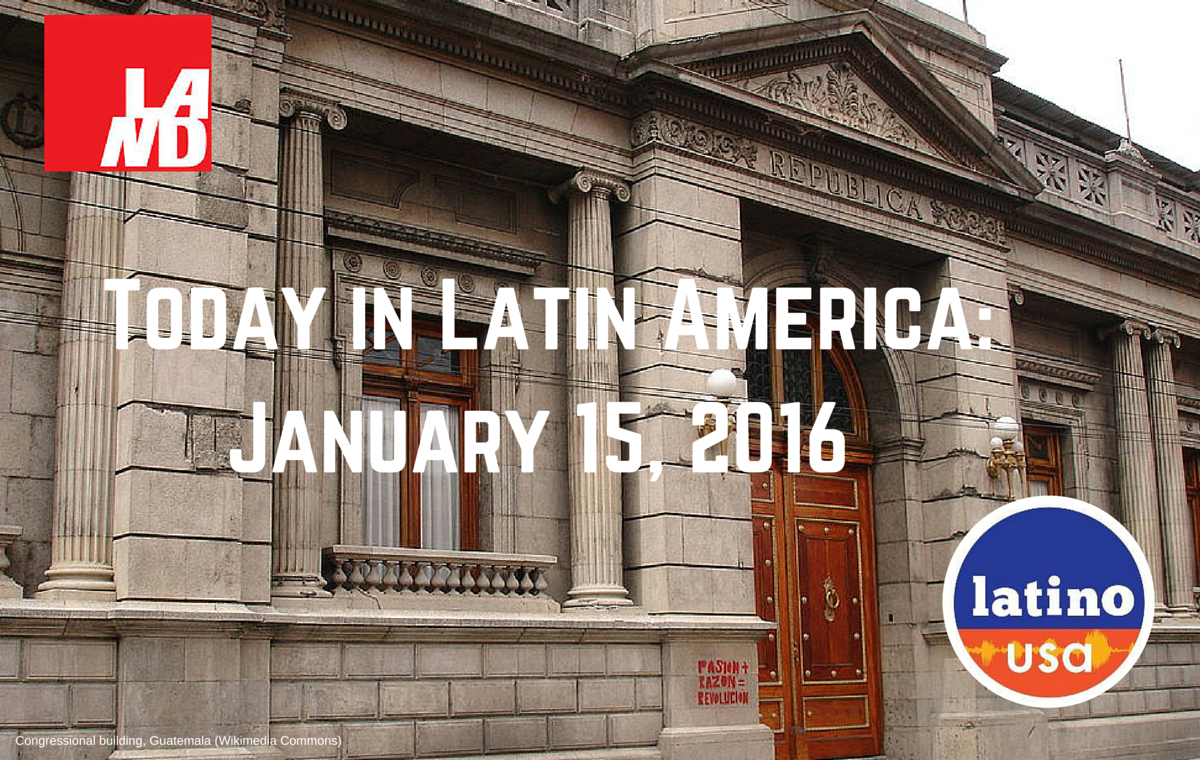 Top Story — Guatemala’s new President Jimmy Morales took office on Thursday. The former comedian rode into office on a wave of populist discontent, but in the wake of his election observers have raised concerns over his lack of political experience and his party’s ties to human rights abuses committed during the country’s 36-year civil war.

A public protest called for Saturday highlights the urgent pace of reforms demanded by many Guatemalans. Morales, however, has faced criticism over his failure to put together a strong administration since his election more than two months ago, including the fact that he did not name any cabinet ministers before taking office.

Morales takes office amid a crisis over migration from his country to the United States. He reportedly urged U.S. Vice President Joe Biden in a meeting before his inauguration to add Guatemala to the list of countries given temporary protected status, which offers many migrants protection from deportation, The Associated Press reported.

Ovalle was one of 18 former military officers charged on Jan. 5 with human rights abuses allegedly perpetrated during Guatemala’s civil war, which lasted from 1960 to 1996.

The proceedings place Morales in a bind and undercut his status as an outsider. His party, the National Convergence Front or FCN, is populated by military officers, many of whom were active during the country’s 36 years of civil strife. Ovalle is one of its co-founders.

The FCN, nonetheless, holds only 11 of 158 seats in Congress, raising the question of whether Morales can govern effectively with so little political support. No FCN members sit on the congressional steering committee, and the incoming assembly speaker is a member of the opposition.

Morales, who in his past career sometimes performed in blackface, never held political office before winning the Oct. 25 presidential election in a landslide.

His election followed the resignation and imprisonment of then-President Otto Pérez Molina, Vice President Roxana Baldetti, and several other high-ranking officials over a corruption scheme that scandalized Guatemalans and led to months of nationwide protests.

Morales, who campaigned on the slogan “Neither corrupt nor a thief.” He doubled down on his campaign promises shortly after his victory, petitioning domestic prosecutors and a U.N.-backed anti-corruption body for help vetting his proposed Cabinet.

“I do have a plan,” Morales told The Associated Press shortly after his election.

Forensics experts in Mexico will investigate the identities of two bodies found in southern Guerrero state, where 43 students disappeared in 2014, the Attorney General said Thursday.

An AP report tracks the journey of 200 Cuban migrants who recently arrived in Mexico from Costa Rica with hopes of crossing to the United States, the first to make it into the country out of 8,000 who have been stranded at the Nicaraguan border since November.

International bank HSBC is arguing in U.S. courts that the requirements laid forth in a deferred prosecution agreement from charges of laundering Mexican drug cartel money will make the bank vulnerable to further money laundering if audit reports are published, as one private borrower has demanded in a lawsuit.

Mexican officials told Reuters that the Ford Motor Company will announce the construction of an automobile plant to be built in San Luis Potosí in the first quarter of 2016, with the expectation that the plant will produce 350,000 compact cars.

After years of prosperity tied to the production of natural gas and oil, Trinidad and Tobago’s economy is suffering due to a global downturn in energy prices.

Haiti’s opposition presidential candidate Jude Célestin said in a radio interview Thursday that he will not involve himself in the January 24 runoff election against Jovenel Moïse even though his name will be on the ballot and the Organization of American States has encouraged both candidates to fully participate.

A top Salvadoran police official has called for the newspaper El Diario de Hoy to be investigated for being “apologists for terrorism,” recalling a court decision last year to classify the country’s two top gangs as terrorist groups, which InSight Crime has suggested could promote human rights abuses in the name of public safety.

Five high-ranking Venezuelan military officers went on trial Thursday on charges they let drug planes fly over the country, which U.S. officials argue is a key supplier of cocaine.

The head of the World Bank said Thursday that international donors should send more development aid to Colombia to help with its peace process, even though the country has enjoyed increased levels of funding in recent years.

A toxic gas leak from a warehouse near the key São Paulo state port of Santos, Brazil owned by a private logistics company necessitated the evacuation of the vicinity and resulted in the hospitalization of some 40 individuals.

Argentine state-run energy company YPF announced Thursday that it signed an initial $500 million deal with American Energy Partners to launch a joint shale gas exploration initiative in a southwestern region of the country.