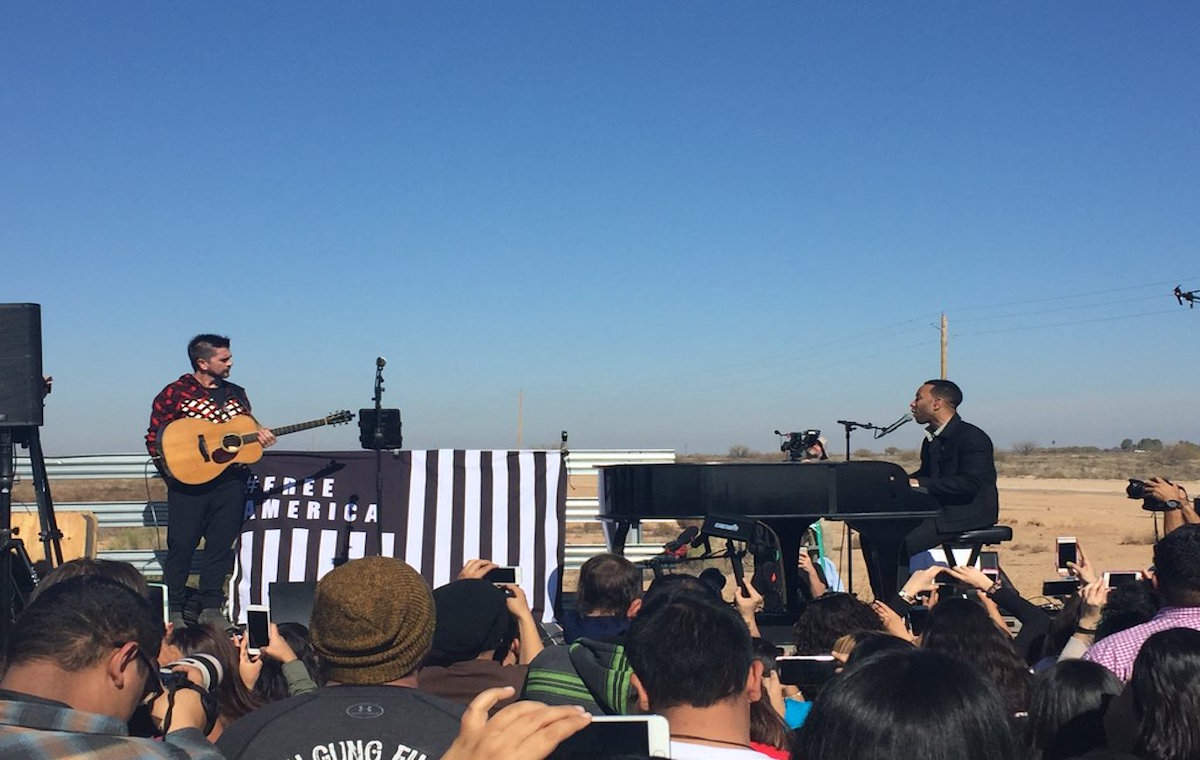 This afternoon, Grammy winners Juanes and John Legend performed together outside the Eloy Detention Center in Eloy, Arizona, to raise awareness about immigration detention in the United States.

Social media included several images and videos of the two performers under the hashtag #FreeAmerica. Here is just a sample of what is being shared:

Juanes and I performed outside Eloy detention center for those inside #FREEAMERICA pic.twitter.com/qhvxZIRvDU

Artists @johnlegend and @juanes are in Arizona today to bring attention to "crimmigration" in America. #FreeAmerica https://t.co/f8SqXcQnh9

In the past few years, the Eloy Detention Center has become a symbol of the immigrant rights community. It is estimated that about 1,500 immigrants are currently being detained there right now. Eloy was also the place where “The Dream 9” —a group of immigrant rights activists Latino USA featured last fall— were detained after entering the United States from the Mexican border.

The Associated Press ran a story in Spanish about today’s performance in Eloy. Legend talked about how the detainees at Eloy are “part of the same system” and that “none of those detained are [in Eloy] because they committed some crime. Their only infraction is that they were here without papers. That is why they are here now and they don’t have the money to post bail.”

“I believe that opportunity and the dream to have a better life, escape the generalized violence in many of our [Latin American countries], doesn’t make you a criminal. I have also learned today that the treatment here is very inhumane.

Eloy has a history of alleged abuses even though it has passed inspections since 2006, according to 2015 reports:

Arizona’s Eloy Detention Facility has not failed an inspection since 2006, the report noted. The center, however, has witnessed the most deaths at a detention facility, with six reported suicides since 2003. And frequent reports of sexual assault at Eloy — which ICE often fails to report, according to a 2013 GAO report — prompted Rep. Raúl Grijalva, D-Ariz., to launch an investigation in June.

At one point on Twitter today, the profile of Maricopa County Sheriff Joe Arpaio tweeted at Legend, inviting the singer to Arpaio’s Tent City Jail, where many immigrants are detained.

According to @PuenteAZ @johnlegend you came by my jail and War on Drugs tank, would you like to visit inside tent city with me?

@RealSheriffJoe perhaps next time. I wonder why you're so proud of your work.