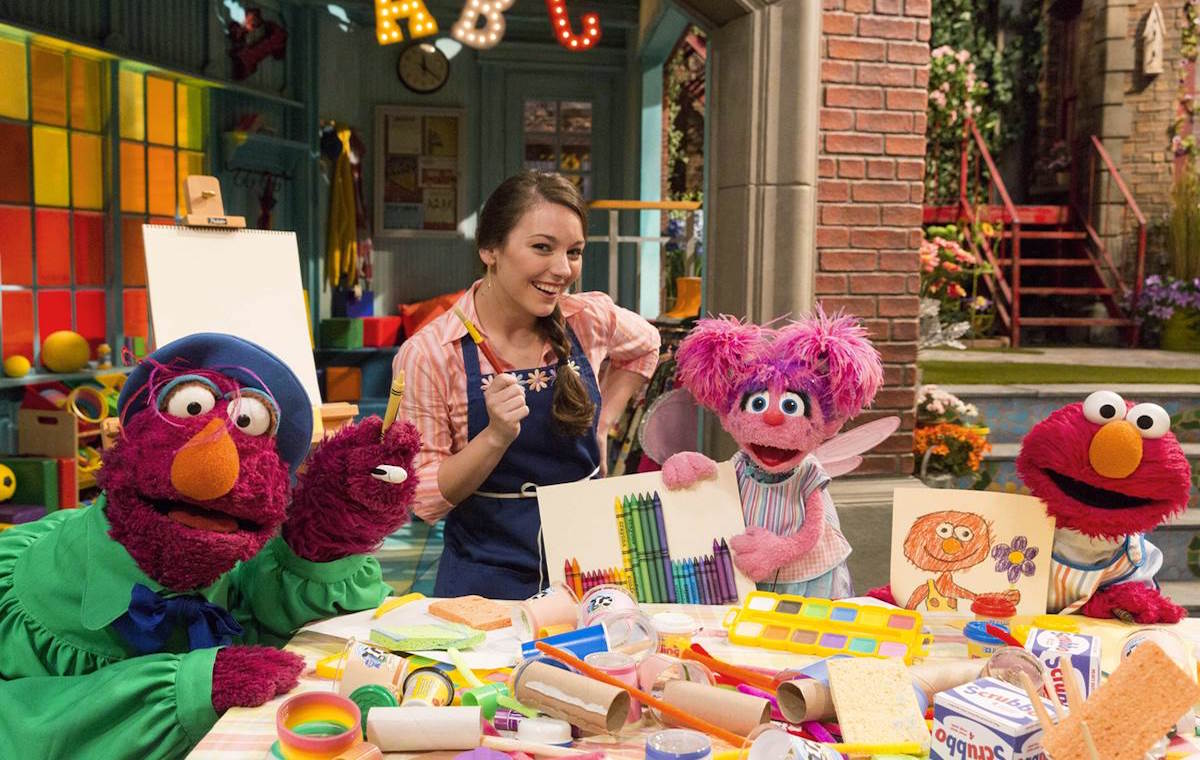 When I was on Facebook yesterday, one of my friends messaged a large group of people about a petition asking that the new Latina character on Sesame Street be portrayed as a college graduate. Not paying much attention to it (in this line of work, I get 20-30 Facebook messages a day), I gave it a glance and moved on to my next work task, since for obvious reasons, I don’t sign petitions, although I have written about them in the past. Nonetheless,  because I was on a large group message, I kept getting notifications of people replying that they would sign the petition. In fact, I noticed that the petition signatures were growing, exceeding 1,000 signatures rather quickly.

So at the end of my work day, I read the petition’s entire text, which was asking that the new character of Nina, played by Cuban American actor Suki Lopez, be portrayed differently from the current role created for the show.

I then looked at who had generated the petition and saw that the author was none other than Dr. Angelica Perez-Litwin of Latinas Think Big. I have known @DrAngelicaPerez for years, since she is one of the most influential digital Latinas in this space we call social media. Because Dr. Perez-Litwin was the person behind this petition, I was intrigued as to why she created it. I emailed her some questions this morning and she sent me her answers. Here is our exchange:

Nina is Elmo’s babysitter, and she’s a laundromat and bike shop worker. While these are important roles in any community, this is a missed opportunity for Sesame Street to highlight a millennial Latina who is pursuing a college or graduate degree, or who’s running her own business or startup. A more accurate reflection of today’s Latina would have Nina’s character as a college/graduate student, working as Elmo’s babysitter and a laundromat worker to pay for college.

Thus, the petition is requesting to change Nina’s character to a more accurate depiction of who we are, and add more depth to her character. We want Nina to be described by Sesame Street as: “an ambitious, innovative college/graduate student, who also happens to babysit and work at a laundromat to pay for college.” We would like to see character grow and evolve into a professional woman, leader or innovator on Sesame Street.

JRV: When did you decide to create it? How did that come about?
APL: Over the weekend, I read a few media articles announcing this new Latina character, and I read Sesame Workshop’s official description of who she is on Sesame Street. As someone who has spent many years promoting the talents, innovative ideas and contributions of Latinas in this country, I was angry (but not surprised) to see yet another stereotyped Latina character on television.

JRV: Why is this petition so important for you?
APL: I have devoted my entire professional career to advancing the lives, careers and prosperity of Latinas. As a clinical psychologist and social entrepreneur, I have taken a very broad approach to achieving that mission. I pay attention to the social, psychological and institutional forces that impact the progress (and lack) of Latinas in this country. One of the issues I have been very passionate about is the way Latinas are portrayed in the media (television, print, digital).

In 2010, I launched the first digital media platform (NewLatina.net, now Latinas Think Big magazine), focusing on valuable and relevant content for the career-driven, professional Latina. We made sure every single article had a photograph depicting Latinas with positive and empowering imagery. Through Latinas Think Big, a global community and platform designed to help Latinas accelerate their careers, we have brought Latina thought leaders and innovators to the stages of big companies like Google, Twitter and Columbia University, so they can share their inspiring stories and innovative projects. We want the world to see who we are, and create a significant shift in how America perceives us. This greatly matters and has tremendous impact on mundane and important aspects of our lives and careers.

JRV: How has the response been so far? Do you have specific examples?
APL: Wow! Well, the petition has generated a very strong emotional reaction from the Latina community. I first shared the petition on the Latinas Think Big online community on Facebook, and in just minutes women began to express their great disappointment and frustration at Sesame Workshop for adding to the stereotyped characterization of Latinas on television. They were especially upset because many of them grew up watching Sesame Street, and many of them have young children who are now watching Sesame Street. It just feels like we keep banging our heads on a wall, when it comes to how poorly we are represented in media, and how little these issues matter to media producers and executives.

The comments left on the petition page are remarkable, powerful and inspirational. Voters used themselves as examples of today’s career-driven and professional Latina. They shared their story of ambition, and hard work. I urge Sesame Workshop to use those comments to have a real understanding of who Latinas are in this country. From Latinas at Harvard Medical School and business owners, to professional and mothers, the comments are poignant, deep and honest. It is empowering to read the collective voices of all these amazing women.

Here are some specific examples:

I want my daughter to see more women like her mother on TV. Cazandra Zaragoza, Sahuarita, AZ

As a black woman I can attest to the fact that representation matters! There is nothing wrong with this character being a babysitter and working in a laundromat/bike store but as a young Latina today she has the opportunity to bring way more depth to her character. It would be fabulous to see a young woman doing more and showing the kids watching that they can do more. Role models on Sesame Street is a great way to start. Vanessa Amankwaa, Bronx, NY

Latinos have been labeled for too long with jobs that are not degrading but that show our community has not achieve successful careers such as doctors, attorneys, financial professional, accounting, business owners or CFO positions. We need to really educate and also take a stand and show that we are the new American family and are an asset to this country. Catherine Garces, Granada Hills, CA

I’m signing because I am a Latina who babysat through my college years to pay for books and meals at Barnard College. Gleendy Marte, New York, NY

In the “real world” she is ambitious. Andrea Andrade, Queens, NY

I am a second generation Latina who is a medical student at Harvard Medical School. I want the next generation of Latinos to dream big too! Jessica Ruiz, Brookline, MA

I am the first in my family to attend college (CSULA/UCLA). I am the first in my family to attend graduate school (Yale). I am also Mexican-American with tremendous pride in my Mexican roots. From first-hand experience, I know that Latinos and Latinas have been historically underrepresented in colleges and universities throughout the country. This is especially true in STEM fields. A positive portrayal of Latinos/Latinas, and every ethnic minority group, on a highly influential show like Sesame Street would make a world of a difference in motivating a younger generation of Hispanics to pursue higher-level education. More role models and leaders, more representation. Many thanks to all of you who have worked hard to let our voice be heard. Victor Ruiz, New Haven, CT

JRV: How far will you go with the petition? Do you expect Sesame Workshop and/or HBO to respond to it?
APL: Our next phase with this effort is to engage Latina/o organizations and media outlets to help us spread the word and promote voting on the petition page. We are going to keep going as far as we can. I also plan on writing a piece on Huffington Post, and having voters write directly to Sesame Workshop. I do expect Sesame Workshop or HBO to respond to this petition. I believe it is a matter of time.

JRV: Anything else you would like to tell the LatinoUSA.org audience about the petition?
APL: Undeniably, this petition has hit a pain point for so many Latinas across the country who continue to feel misunderstood, misrepresented and pushed aside by mainstream America and mainstream media. I believe this is an important point of departure for further dialogue on the core and broad issues that this petition has unveiled.

UPDATE: On January 22, the Suki Lopez’s Twitter profile shared this. According to Lopez, the Nina character is already a college student.

Estoy en acuerdo. For me, Nina ya es una estudiante de universidad! She's a college student. Her jobs are side jobs. @bmojica09 @LatinoUSA

@julito77 for me, Nina is a college student. She works her side jobs to pay for school and rent.