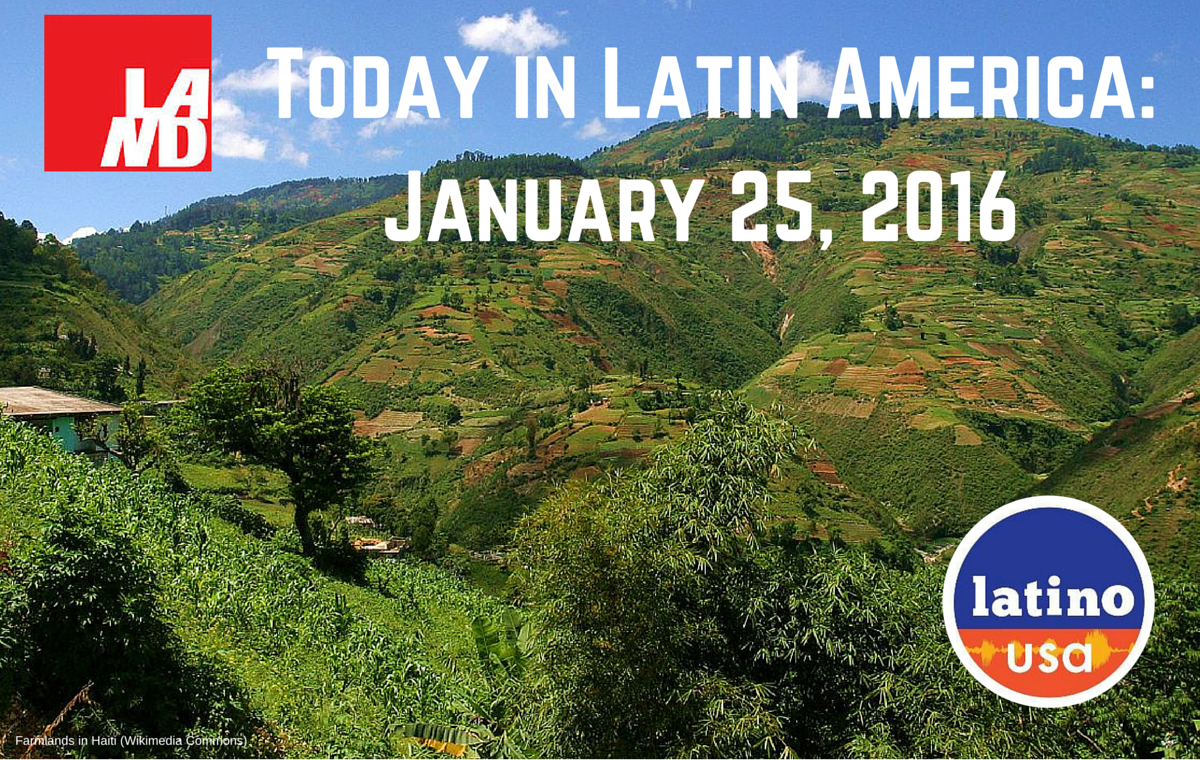 Top Story — Anti-government protesters took to the streets of Port-au-Prince on Saturday in response to the cancellation the day before of a presidential election. Voters were scheduled to choose on Sunday the successor to outgoing President Michel Martelly in a runoff vote between opposition candidate Jude Célestin and ruling party candidate Jovenel Moïse.

The protests come in the wake of a week of political turmoil. Célestin labeled the planned elections “a farce” on Tuesday, accusing President Martelly of favoring Moïse and subsequently announcing his boycott of Sunday’s poll. Officials announced the cancellation of elections on Friday as violence began to escalate in the capital, as protesters threw rocks and called for new elections and the immediate removal of Martelly. This represents the second postponement of the runoff, which was initially scheduled for Dec. 27.

President Martelly’s term ends on Feb. 7, at which point opposition protesters demand he be replaced by an interim government that would organize new elections. Protesters are critical of Martelly’s perceived friendliness towards business and foreign interests, and hope for a new president who will look out for the concerns of the poor in the Western hemisphere’s most impoverished nation.

The unrest continued on Sunday, prompting U.S. officials to condemn the violence. The United States, wary of yet another political crisis in Haiti, has contributed some $30 million in aid to ensure smooth elections.

Friday saw 22 Senate Democrats issue a letter to the White House calling for an end to recent deportation raids against Central American migrants, most of them women and children fleeing violence, stating the situation in the migrants’ home countries constitutes a “humanitarian and refugee crisis involving a vulnerable population.”

A New York Times report documents the increase of mob lynchings in Mexico —the number of extrajudicial killings reached 78 in 2015, doubling the previous year— a response the report indicates is related to feelings of fear and lack of confidence in the authorities.

Kate Del Castillo, the Mexican actress who connected Sinaloa cartel leader Joaquin “El Chapo” Guzmán to actor Sean Penn before the former’s capture, now claims that the Mexican government wants to “destroy” her after investigators called her in for questioning surrounding her relationship with the kingpin, according to a Univision report.

Lawyers for the Puerto Rico Electric Power Authority failed to meet a Friday night deadline to approve a deal to restructure part of its $8.2 billion in debt, potentially forcing the utility to cut power services by the summer unless a new deal is reached with bondholders.

Cuban Foreign Ministry officials announced they held meetings with U.S. State Department officials and telecommunications executives to discuss the potential for increased internet service for “economic and social development” on the island.

In response to the outbreak of the mosquito-borne and birth defect-inducing Zika virus throughout the region, El Salvador’s Health Ministry has called for women in the country to refrain from getting pregnant for two years, a call that has received criticism both for being unfeasible and for being inconsistent with the country’s strict anti-abortion laws.

Thirteen Costa Rican tourists drowned after a boat carrying over 30 people capsized due to bad weather off the Atlantic coast of Nicaragua.

Venezuela’s opposition on Friday rejected President Nicolás Maduro’s decree that would have expanded executive financial power, alleging that the “economic emergency” program does not resolve one of the core origins of the country’s failed economy: Maduro’s leadership.

Diplomats from The United Nations said Sunday that they expect the U.N. Security Council to unanimously approve a measure brought to vote on Monday that would create an oversight mission for the Colombian disarmament process with FARC rebels after a projected peace deal.

Brazilian authorities said they have apprehended most of the 40 inmates who detonated a bomb to break out of a prison in the city of Recife Sunday, the region’s second mass prison escape in the past week.

Meanwhile, the Brazilian Health Ministry has announced its plans to contain the mosquito-borne Zika virus during the 2016 Olympics through regular inspections and occasional fumigation, although the latter presents its own health concerns.

Argentina’s ambassador to London said that the British Labour Party leader Jeremy Corbyn “shares our concerns” about how to manage the Falkland Islands, advocating a power-sharing arrangement similar to one in Northern Ireland.