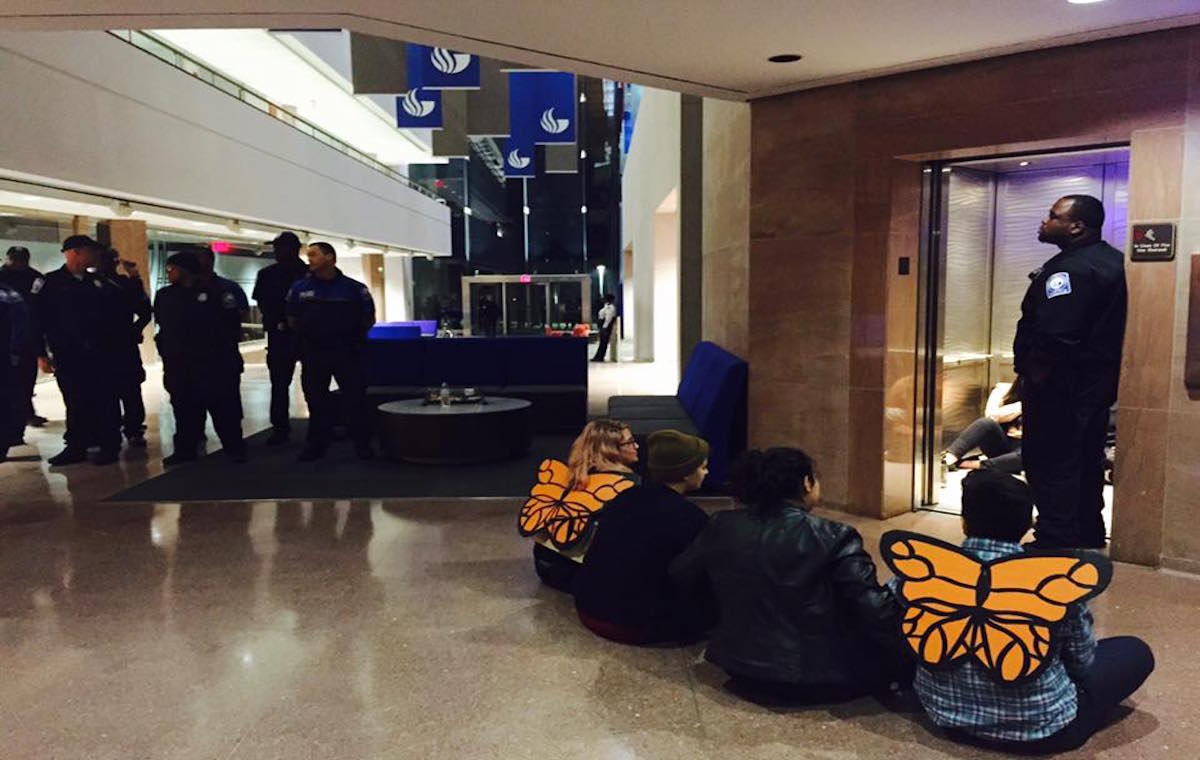 Photos of protesters at Georgia State University (Via Freedom U. Georgia)

Six students were arrested in the city of Athens after refusing to leave a building on the campus of the University of Georgia, and another eight were arrested during protests at Georgia State University in Atlanta. The protests were organized by Freedom University, an Atlanta-based school for undocumented students modeled after the tuition-free “freedom schools” organized for African Americans in the segregated South during the Civil Rights movement.

Georgia is one of three states, together with Alabama and South Carolina, that deny admission to students without legal status. The Georgia Board of Regents, an unelected body that oversees the University System of Georgia, approved two policies in 2011 that bar undocumented students from attending the state’s five best public universities, and deny undocumented Georgia residents access to significantly lower in-state tuition at all public universities.

“Undocumented students truly deserve the right to attend institutions of higher education here in Georgia,” said Ashley Rivas-Triana, a Freedom University student who was occupying a classroom at Georgia State University. “We are citizens of this state, we pay taxes in this state and we deserve to receive the same benefits as other citizens in the state.”

The protests come on the same day that Georgia’s Supreme Court ruled that members of the Board of Regents could not be collectively sued over their refusal to grant in-state tuition to undocumented residents. A spokesperson for the Board of Regents did not immediately respond to requests for comment.

In a press release, Freedom University said that they were demanding “that the presidents of each school, Jere Morehead of UGA, Mark P. Becker of GSU, and George Peterson of Georgia Tech, publicly denounce the discriminatory policies affecting their institutions.”

This is the latest attempt Freedom University activists have made to draw attention to the Board of Regents policies. Last January, nine students were arrested for refusing to leave a building after organizing what they called the first ever “integrated classroom” for undocumented and documented students at the University of Georgia. Student activists have also repeatedly protested at Board of Regents meetings since the 2011 decision, leading to a number of arrests.

Monday’s protesters —around 90 in total, according to organizers— wore hand-painted orange and black butterfly wings to symbolize their own migration to the United States, and timed the sit-ins to coincide with the 56th anniversary of the student-led lunch counter sit-ins in Greensboro, North Carolina, that challenged racial segregation in the U.S. South.

Rivas-Triana, the student protester, emphasized that the demonstrators came from universities across the state, and were comprised of both documented and undocumented students hoping to integrate the state’s universities.