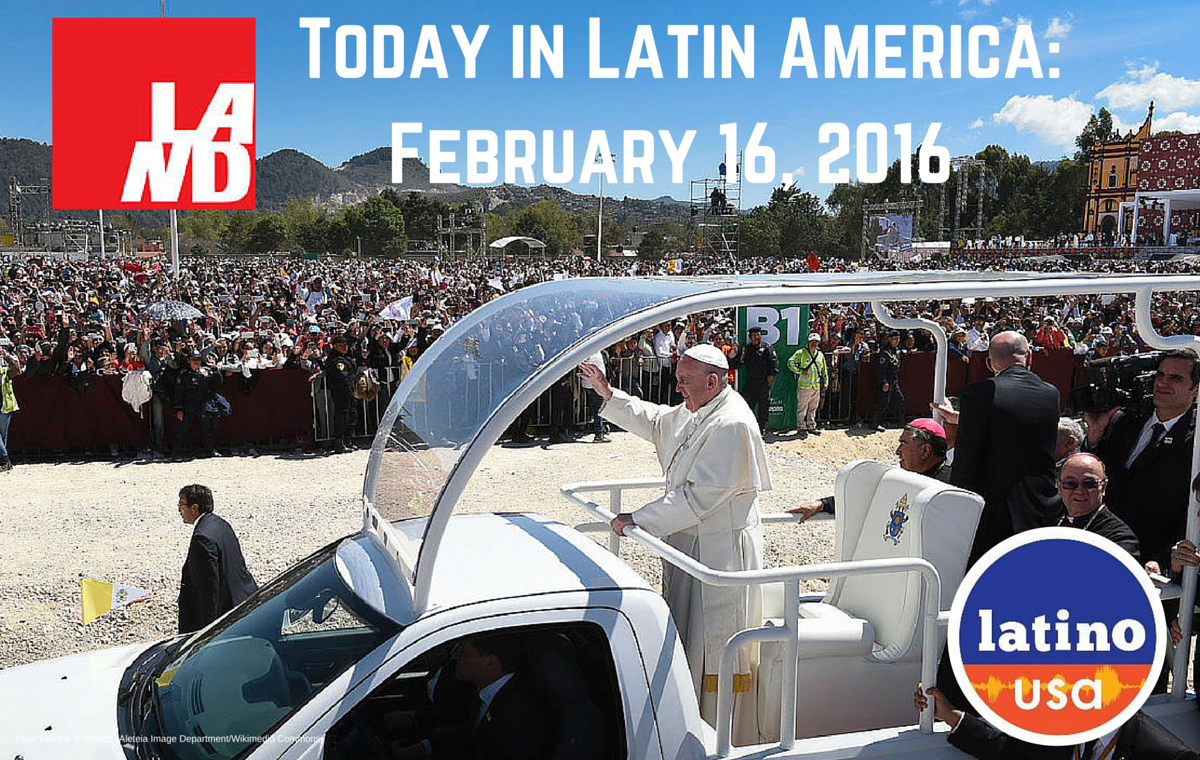 Top Story — Pope Francis left for Mexico’s Michoacán state on Tuesday morning, where he plans to meet with young people in the capital Morelia, a major drug trafficking hub. The visit will mark the second-to-last stop in the Pope’s six-day tour of Mexico, a trip that saw him break ranks with prior Vatican doctrine over its treatment of indigenous believers.

The Pope’s pronunciations during his visit to Mexico have thus far fallen in line with his work on behalf of marginalized communities and the environment. The New York Times notes, however, that Francis has also avoided antagonizing the administration of President Enrique Peña Nieto with critical rebukes.

It remains to be seen whether Francis will meet with the families of the 43 students missing from the state of Guerrero since September 2014. The relatives of several of the missing students are expected in Ciudad Juárez, where the Pope will travel to on his last day in the country.

The Pope visited the largely indigenous southern border state of Chiapas on Tuesday, which is considered, according to the BBC, the least Roman Catholic state in Mexico. He celebrated Mass in three Mayan languages and asked for forgiveness for the “systematic and organized” exclusion of indigenous peoples throughout history.

“Some have considered your values, culture and traditions to be inferior. Others, intoxicated by power, money and market trends, have stolen your lands or contaminated them,” he said. “Today’s world, ravaged as it is by a throwaway culture, needs you.”

During his visit to Chiapas, Francis prayed before the tomb of Bishop Samuel Ruiz, who led the state’s San Cristóbal diocese for about 40 years. Ruiz was beloved by Chiapas’ churchgoers but controversial among Mexico’s Catholic leadership for supporting the incorporation of indigenous traditions into church rituals. Ruiz also backed the ordination of married indigenous deacons, a policy struck down by the Vatican after his death in 2011.

Francis vindicated many of Ruiz’s positions. In a decree, he gave his approval for the Aztec language Nahuatl to be used in Mass. His inclusion of three Mayan languages during his own service signaled that these could be used as well, according to the Vatican Press Office. Several married indigenous deacons participated in Monday’s Mass.

Mexican police have regained control of the Topo Chico prison in the state of Nuevo León, where 49 inmates were beaten and stabbed to death during a riot last week reportedly sparked by factional violence between cartel leaders. In their clean up, the police found gang leaders in the notoriously overcrowded prison lived in “luxury cells” equipped with televisions, aquariums and air conditioning.

Prosecutors say the 13 people found shot to death near the border between the northern states of Sinaloa and Durango were victims of a fight between rival gangs.

The Miami Herald is describing this week as a pivotal moment for U.S.-Cuban relations. On Monday, an Alabama-based company won permission from the U.S. government to build tractors in Cuba, likely becoming the first U.S. manufacturer to directly operate on the island since the 1959 Cuban Revolution. That news comes as an aviation agreement will come into effect today that will allow U.S. airlines to submit applications to fly routes into Havana and nine other Cuban cities.

Cuba returned to the United States an inert Hellfire missile that was mistakenly sent to the island after being used in a Spanish training exercise, ending fears in the military intelligence community that Cuba could sell the highly confidential technology to U.S. military rivals.

The U.S. Coast Guard will begin hearings today investigating the sinking of the cargo ship El Faro, which sank in October between Florida and Puerto Rico.

Over 70 expat couples, most U.S. citizens, were married in a mass wedding designed to skirt what they see as Costa Rica’s discriminatory laws for applying to that country’s social security program.

El Salvador’s Chief of National Civil Police announced that there have been nearly 100 shootings in the country this year, an increase over last year that InSight Crime attributes to increased confrontations between security forces and gang members.

ELN rebels in Colombia reportedly conducted a series of seven separate attacks throughout the country Monday, killing a policeman and injuring several others.

Venezuelan national assembly speaker Henry Ramos Allup said in a news conference Friday that opposition leaders will try to accelerate the process of ousting President Nicolás Maduro in order to promptly resolve the country’s economic crisis and shortages, which the Washington Post reported Monday will exacerbate the impacts of Zika virus.

Colombia’s national health institute demonstrated in an epidemiological paper that 5,000 pregnant women in Colombia have contracted Zika virus, which a New York Times report Monday indicated may have implications for their decisions about terminating their pregnancies, even before the country has witnessed a single case of microcephaly in a child born from a Zika-infected mother.

The Brazilian government initiated an ambitious public health campaign to combat the Zika virus on Saturday, deploying 220,000 soldiers to disseminate information to three million homes about how to curb the spread of infectious mosquitoes.

The CEO of Royal Dutch Shell said Monday that the company intends to expand investments in Brazil’s offshore drilling, with the expectation to multiply oil and gas production there fourfold by 2020

Brazilian rights group Reporter Brazil exposed 340 companies use of slave labor through a Freedom of Information Act, leading the country’s labor ministry to impose fines and free victims in an effort to abolish the practice, which the investigation demonstrated to be far-reaching.