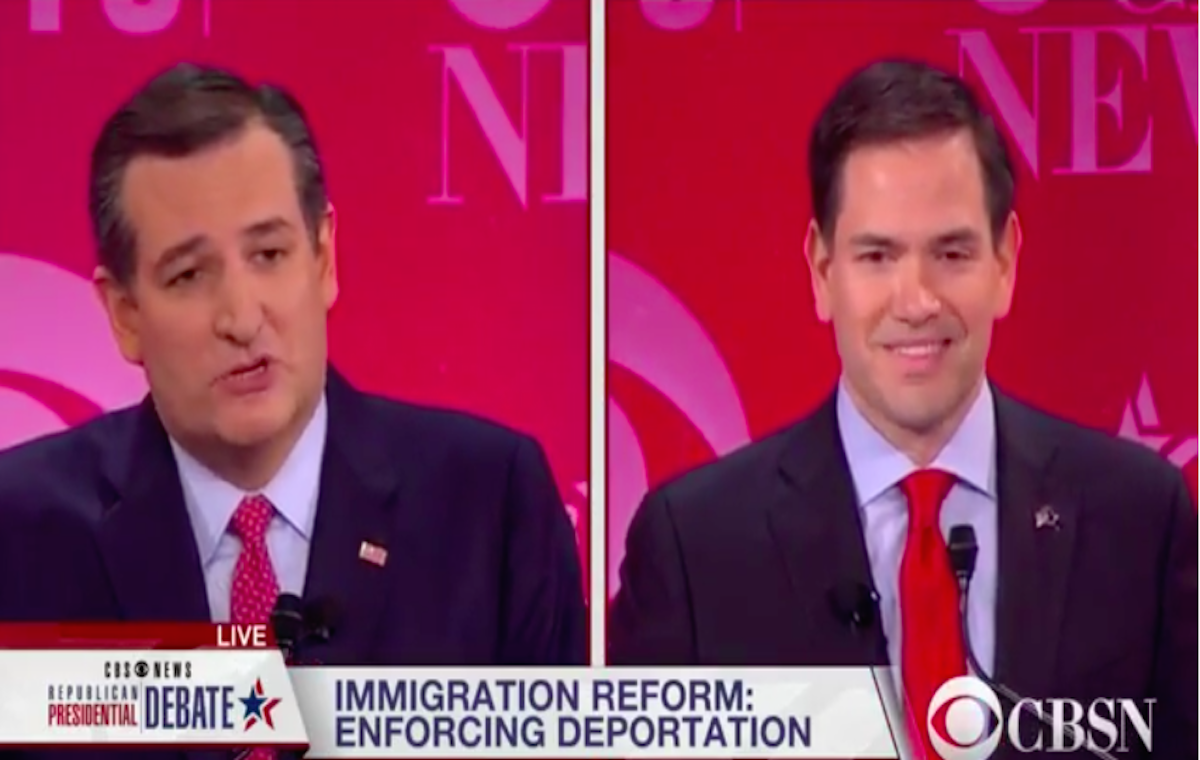 In the most recent Republican debate on February 13, a bizarre exchange between Marco Rubio and Raphael Eduardo “Ted” Cruz occurred. The first two Latino presidential candidates in U.S. history were jabbing at each other over the topic of immigration—namely, who had the more conservative policy. Cruz claimed that Rubio had duplicitously spoken on Univision, saying the Florida senator would not rescind President Obama’s executive actions that defer the deportation of select youth and families. Rubio fired back that Cruz had no idea what he was talking about because Cruz does not speak Spanish. In a rare lapse of judgement, Cruz, a champion debater, broke character and defended his position in grammatically flawed Spanish. It was a confusing moment for many watching at home.

Nonetheless, this moment represented the collision of two wings of the Republican Party that had been competing against each other for nearly a half century.

The Party of Hispanic Values

Since the days of Richard Nixon, there has been a small but influential group of Latinos who have tried to draw Latinos into the Republican Party. In fact, NPR’s Latino USA recently explored Nixon’s amigo buses in an overview about the Latino vote in modern political times:

During the era of Ronald Reagan, Lionel Sosa worked as a marketing strategist and advisor in the 1980 and 1984 campaigns. It was Sosa’s ads that asserted the idea that Latinos were Republicans—they just didn’t know it yet. Linda Chavez served as a Reagan appointee and was nominated by George H.W. Bush for Secretary of Labor. In her 1991 book, Out of the Barrio, she made the case that Latinos and their success were ultimately linked to Republican politics and policies. Leslie Sanchez served as a press secretary for the Republican National Committee and helped lead George W. Bush’s Hispanic outreach in the 2000 election.

Soon, this small group of influential Latinos made serious inroads within the Republican Party, so much so that the GOP was marketing itself as the party of “Hispanic” values, families and faith. Government was not the answer. If capitalism was color-blind and meritocratic, then so should society, these influential Latinos believed. They assured other Republicans that Latinos were not to be feared and affirmed for Latinos that Republican free-market, pro-small business policies with low taxes and access to higher education would create the best outcomes.

They had some success.

The 2012 Republican presidential nominee, Mitt Romney, alienated Latino voters with many of his policy positions, including the idea that the U.S. should make life so difficult for unauthorized migrants that they would “self-deport.” Subsequently, Romney received only 27% of the Latino vote. The post-election Republican National Committee “Growth and Opportunity Project,” also known as the autopsy report, concluded that the Republican Party needed to not only reach out to the Latino community, but embrace them. The GOP needed to be the champion of comprehensive immigration reform to win future presidential elections. In short, the futures of the GOP and Latino community were intertwined.

The Party of Citizen Patriots

At the same time, there was another group within the Republican Party blaming American economic and social decline on minorities and immigrants. By the late 1990s, some believed that the cultural changes within American society were sinister signs of deeper decline of American values and beliefs. Patrick Buchanan, a fringe political aspirant, wrote book after book about the looming “death of the West” and the “suicide of a superpower” through the late 1990s and early 2000s. He railed that immigrants and especially Latinos were a threat to the nation.

In 2004, Buchanan’s ideas were given legitimacy when the late Harvard professor, Samuel P. Huntington, published an essay in Foreign Policy entitled “The Hispanic Challenge,” which claimed that Latinos in the U.S. represented the gravest crisis to the nation in American history. Huntington warned that Latino migration threatened to split the nation in two. The Harvard professor even rebuked Lionel Sosa: “Sosa is wrong. There is no Americano dream. There is only the American dream created by an Anglo-Protestant society. Mexican Americans will share in that dream and in that society only if they dream in English.”

Republican politicians like Maricopa County Sheriff Joe Arpaio and Colorado representative Tom Tancredo earned national notoriety and electoral victory because of their anti-Latino positions in the early 2000s. Combined with the rise of the Minutemen at the time, it seemed that the GOP was not only split in two, but one side was clearly winning the battle for hearts and minds of the party. The Minutemen eventually faded into oblivion and mismanagement, but the emergence of the Tea Party built upon the imagery and vocabulary of the Minutemen when Barack Obama was elected—they were citizen patriots obligated to act because of government ineptitude and inaction, all wrapped in flags and bald eagles.

In May of 2015, conservative commentator Ann Coulter garnered attention for telling Jorge Ramos that Mexican immigrants were a more serious threat to the nation than ISIS. “If you don’t want to be killed by ISIS don’t go to Syria. If you don’t want to get killed by a Mexican, I don’t know what to tell you” Coulter said. Only weeks later, in June, Donald Trump announced his bid for the presidency with an anti-Mexican tirade that equated Mexicans with rape and crime. For this vocal group of Republicans, the party was the champion and defender of an American culture that was under threat.

These two strains of Republicanism have been on display throughout the 2016 campaign. Yet, in the 31-second exchange between Rubio and Cruz, they collided together in complicated and contradictory ways. Here were two Latino candidates, the children of immigrants, the children of Cuban refugees, and Spanish was now a part of that exchange. No matter the language, Rubio and Cruz were still speaking about who had a harsher immigration policy, who would promise to keep refugees out, who would make government smaller, who would not only make America great again, but who would make it greater.

Yes, Spanish was spoken, but the language used Saturday night in South Carolina was not a foreign one. Rubio and Cruz read from a script a half-century in the making, built upon the exclusion and demonization of Latinos and other minority groups. On that stage, in those confusing seconds, both groups in the Republican Party had won, yet at the same time, both groups had lost.

It is yet to be seen if they will lose the election.

4 thoughts on “OPINION: Explaining the Rubio and Cruz Exchange in Saturday’s #GOPDebate”