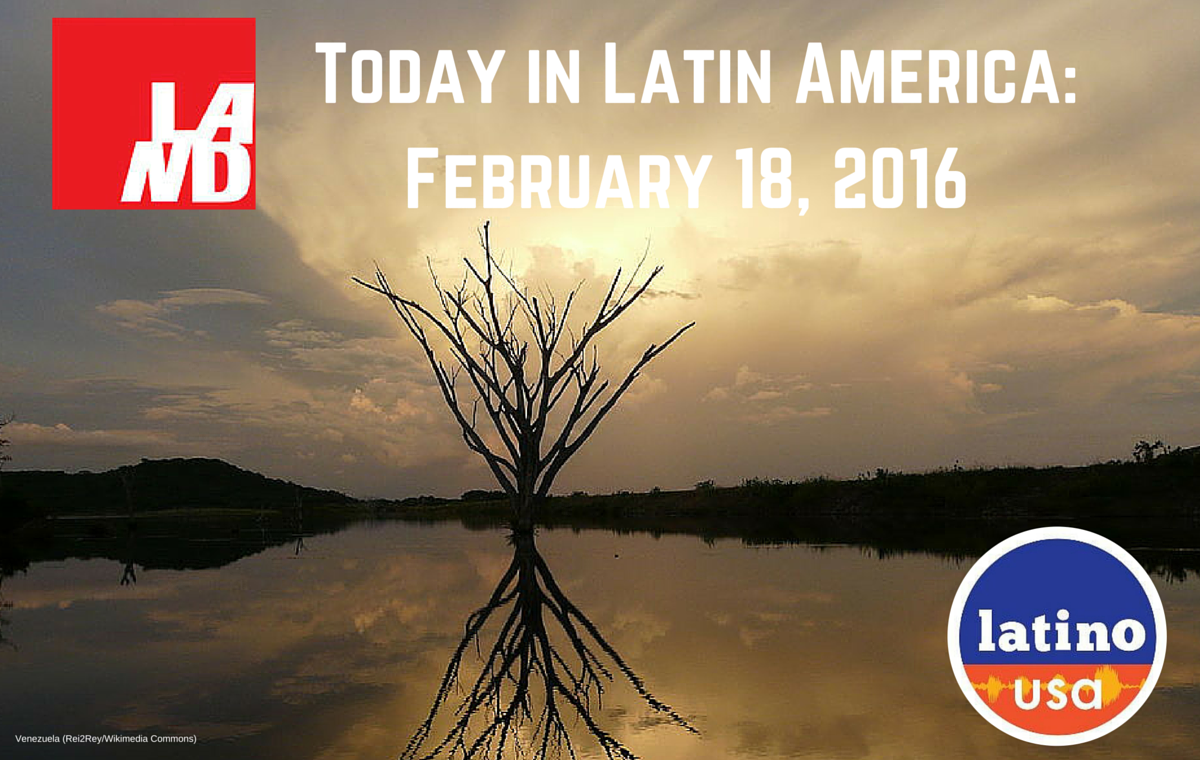 Top Story — Venezuelan President Nicolás Maduro announced on Wednesday that he will devalue the country’s currency and raise gasoline prices in an effort to boost Venezuela’s tanking economy. While gasoline will still only cost a few cents per gallon after the 60-fold increase, the action is the first of its kind in some 20 years.

Venezuela’s currency will drop from 6.30 bolivars to one U.S. dollar to 10 bolivars to the dollar, though one dollar will currently buy 1,000 bolivars on the black market. The measures were taken to curb rising inflation and slow a recession resulting from a global price drop in oil, which makes up 95 percent of Venezuela’s exports. Venezuela’s Oil Minister Eulogio Del Pino also appealed to the Organization of Petroleum Exporting Countries to freeze production to increase prices, though Iran announced Wednesday that it will not comply with the request. (Iran did react favorably, however, to an announcement from Russia and Saudi Arabia that they had agreed to freeze their oil output, resulting in a 7 percent increase in oil prices today to $35 a barrel.)

The Maduro administration’s announcement comes one day after parliament passed an amnesty law seeking to free 75 imprisoned political dissidents, including prominent opposition leader Leopoldo López, who was sentenced to nearly 14 years in prison in Sept. 2015 for his role in violent anti-government protests in 2014. The law is one of the first parliamentary attacks against the Maduro government since an opposition coalition took control following December elections. Many see Maduro’s parliamentary defeat as a reflection of his approval ratings, which hover around 20 percent.

Maduro has vowed to veto the amnesty law, but only has the power to do so once before opposition lawmakers can reintroduce it. The law will then go to the Supreme Court, which has not voted against the executive branch since before former President Hugo Chávez took office in 1999. Still, Maduro is likely to face increased opposition in parliament, which may even seek to shuffle the court to bring an end to its pro-government slant.

In the first of a two-part series of articles, Latin America News Dispatch’s own Katie Schlechter explores how child migrants navigate deportation hearings in New York City courts with the help of a coalition of organizations providing legal rights trainings and pro-bono counsel — yet children are still falling through the cracks.

In the final day of his visit to Mexico, Pope Francis lamented the “tragedy” faced by migrants crossing the U.S.-Mexico border, where he held mass in Mexico’s Ciudad Juárez.

On Wednesday, Mexico’s Finance Ministry announced an increase in its interest rate to 3.75 percent in an attempt to keep inflation from rising and prop up the country’s flailing currency.

U.S. President Barack Obama will make a historic trip to Cuba in March, U.S. officials told various news organizations on Wednesday, which will be the first time a sitting U.S. President has visited the island nation in 88 years.

Puerto Rico’s government has finally released its Fiscal Year 2014 financial report, in which it has cited “substantial doubt” in its ability to be able to pay its massive public debt and keep government services functional.

The New Yorker reports on the ongoing presidential-election crisis in Haiti, and how interim President Jocelerme Privert could influence the country.

Following the incarceration of four former Salvadoran soldiers in Spain for the 1989 killing of six Jesuit priests, over 200 former soldiers protested for their release before El Salvador’s Supreme Court.

According to the National Autonomous University of Honduras’ Observatory of Violence, the country’s homicide rate fell by 12 percent in 2015, a drop that is attributed to the fact that many drug cartel bosses have been captured and extradited to the United States.

Colombia’s Police Chief Gen. Rodolfo Palomino stepped down on Wednesday, following allegations that he coerced young male cadets to have sex with higher-ranking officers. The general’s resignation came one day after the country’s attorney general announced an official inquiry into the matter.

In Colombia, prosecutors are looking into more than 100 disappearances from La Modelo prison between 1999 and 2001. Prosecutors believe the missing prisoners may have been killed and dumped in the Bogotá prison’s sewer system.

Protesters calling for better schools set fire to a municipal building in El Alto, Bolivia, resulting in the deaths of six city employees from asphyxiation.

Several families in Peru have occupied the Las Bambas copper mine, demanding fair compensation from owners MMG Ltd for having been relocated to make way for the mine, which is expected to make Peru the world’s second biggest copper supplier behind neighboring Chile.

Argentina is suffering one of the country’s worst outbreaks of dengue virus in years, with around 4,900 cases reported in the first five weeks of this year.

A key ally of Brazilian President Dilma Rousseff was elected on Wednesday as the leader of the lower house of Congress, defeating the candidate handpicked by Rousseff’s nemesis, Speaker Eduardo Cunha, who spearheaded calls for the president’s impeachment last year.