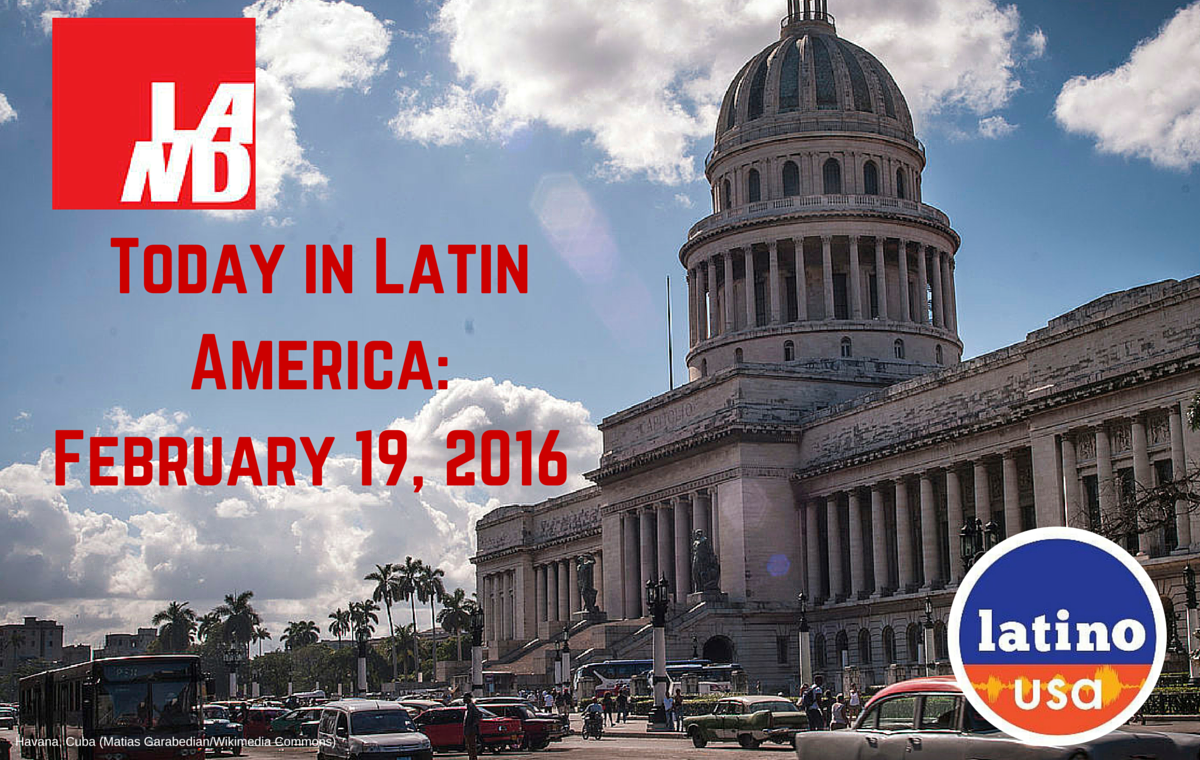 Top Story — U.S. President Barack Obama will travel to Cuba on March 21 in order to proceed with the normalization of relations between the United States and the island nation, according to a Thursday statement from the White House press secretary.

Obama, who will be traveling with First Lady Michelle Obama, will be the first sitting U.S. president to visit Cuba in nearly 90 years, and plans to meet with President Raúl Castro as well as dissident and civil society groups, but not Fidel Castro.

The trip will be a major phase in the process of normalization that has followed Obama and Raúl Castro’s Dec. 2014 announcement that they would resume diplomatic relations.

The White House’s announcement also comes two days after U.S. and Cuban officials signed an agreement restoring commercial flights between the two countries. Taking to Twitter, Obama said, “Next month, I’ll travel to Cuba to advance our progress and efforts that can improve the lives of the Cuban people.”

In Havana, many Cubans welcomed the news of the planned visit, reported The Associated Press, with some expressing hope that it would accelerate economic and social change there. Since the initial thawing of relations in 2014, tourism has grown rapidly and new WiFi hotspots throughout the island have brought internet access to tens of thousands.

Nevertheless, many ordinary Cubans feel that the pace of transformation is too slow. For those who have not been able to take advantage of the private sector boom in tourism and who are living on a state salary, little has changed in everyday life.

Cuban officials are still calling for an end to the U.S. embargo that has crippled their economy for more than 50 years, and which remains under the control of the Republican-led U.S. Congress. Yosvany Martinez, who works as a parking attendant in Havana, told the AP, “The trip will open the door to what we need, that they get rid of the blockade that’s hurting us.” Cuba also demands the return of the Guantanamo Bay naval base, although it remains unclear whether this issue will be included in March discussions.

Pope Francis alluded to the Catholic Church’s need for leniency on contraceptives Thursday in a comment to reporters while returning from Mexico, saying that “avoiding pregnancy is not an absolute evil” in mitigating the risks of the Zika virus.

Latino USA reports on efforts by the U.S. Democratic presidential hopefuls to court valuable endorsements from Latino leaders, and while Hillary Clinton has a lead with big names, Bernie Sanders has built an important support network.

A Puerto Rican legislator said in a statement Thursday that the U.S. territory will undergo two congressional hearings to begin the process of writing legislation to resolve its debt crisis, with Republicans anticipating to put forward a bill by the end of March.

Puerto Rico’s prospects for winning a U.S. Supreme Court case about reinstating a 2014 law which would allow for debt restructuring may have a better chance of winning after the death of Justice Antonin Scalia, who strongly believed in enforcing the territory’s contractual obligations to the United States.

The Nicaraguan government claimed in a press release Wednesday that The United Nations Development Program had supplied $21 million to opposition parties, a charge the UNDP denies.

Cell phone evidence from the extortion trial of a Salvadoran gang member suggested that he had corresponded about a votes-for-protection deal with government officials during the 2012-2013 gang truce, when the former president said they had not communicated.

Representatives from Guatemala, Honduras and El Salvador will convene next week in Washington with U.S. Vice President Joe Biden to discuss the impacts of the Alliance for Prosperity plan, which seeks to alleviate the conditions that give rise to mass migration from the three Central American countries by revitalizing economic opportunities and improving public safety.

Top Colombian peace negotiator Humberto de la Calle announced the suspension of the permits that give his FARC counterparts safe passage between guerilla camps, after top rebel commanders appeared in photos and video footage with weapons in a town plaza, an apparent violation of established ground rules.

The broadcast of a secretly shot video featuring a former Colombian senator and a police captain exchanging kisses and frankly discussing sexual encounters with other men has sparked a national debate over homophobia and journalistic ethics.

A long-winded speech by Venezuelan President Nicolás Maduro on his country’s economy included an unexpected questioning of government officials over their preferences in Spanish soccer teams and a rift on baseball, comments some are criticizing as inappropriate given Venezuela’s floundering economy.

As power supplies faltered amid a heat wave in Argentina, authorities there scheduled two days of power cuts affecting some 190,000 electricity customers in Buenos Aires and surrounding areas on Thursday.

Though São Paolo has largely recovered from a two-year drought, with reservoir levels more than doubled since last year’s El Niño-linked rains, companies and activists have said future droughts may be inevitable as consumption has not been curbed nor efficiency improved.

In a bombastic interview with leading Brazilian newspaper Folha de S. Paulo, journalist Miriam Dutra said that former President Fernando Henrique Cardoso, with whom she had a long-time extramarital affair, paid for two abortions that she had during his presidency, despite the fact that abortion is largely illegal in Brazil.