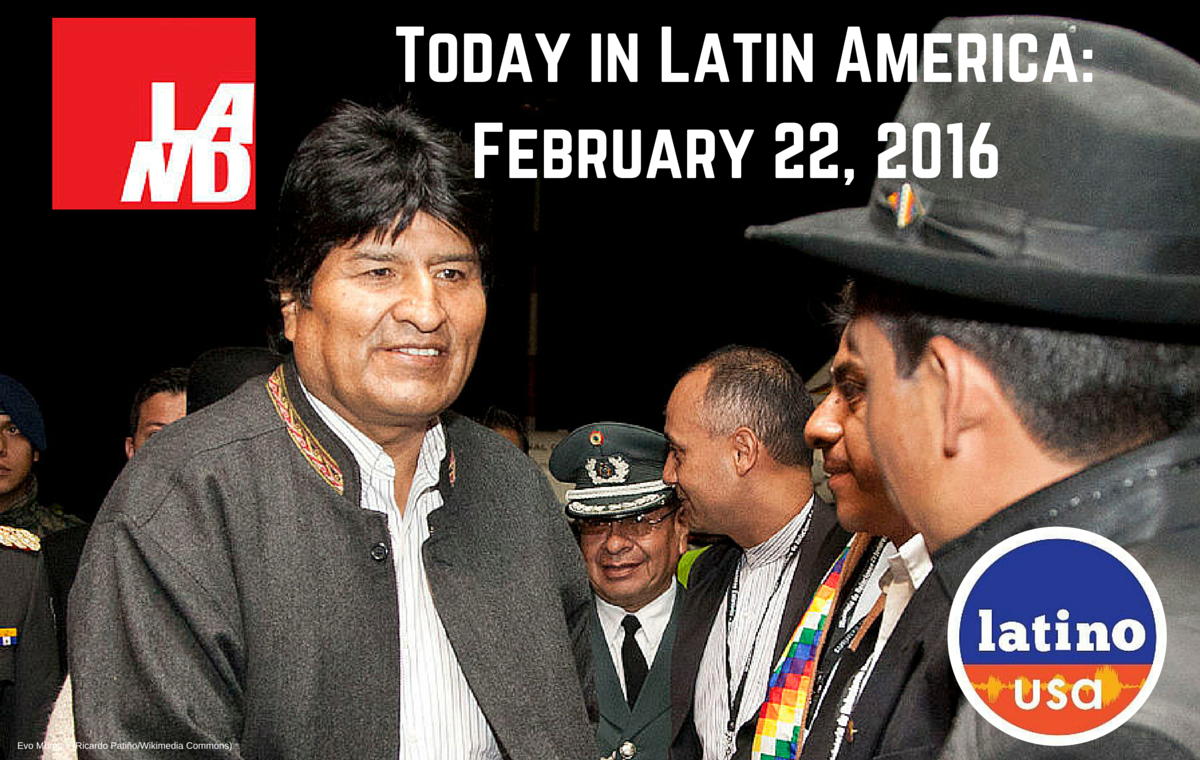 Top Story — Exit polls and early vote counting from a referendum in Bolivia show that President Evo Morales is likely to lose his bid to seek re-election for a fourth term by a narrow margin.

Government officials, however, have described the outcome as a tie, considering that the votes from several rural districts, where support for the president is high, have yet to be counted.

The referendum results reflect growing dissatisfaction with Morales, who has led the South American nation since 2006. Morales is Bolivia’s first indigenous president and has enjoyed widespread popularity for much of his tenure, having presided over steady economic growth in the last ten years. But charges of corruption and a scandal involving a love child may have stretched his goodwill too thin.

Early exit polls released Sunday indicated that between 51 and 52.3 percent of voters rejected the president’s bid to amend the constitution so that he can run for re-election and possibly remain in office until 2025. His current term runs out in 2020.

Bolivia’s constitution, ratified in 2009, limits presidents to two consecutive terms. Morales was able to seek re-election a second time in 2014 due to a ruling by the Constitutional Court, which determined that his first term didn’t count because it preceded the new constitution.

Allegations of corruption have plagued Morales’ administration and seen his popularity tumble since the start of his third term in January 2015. He suffered his biggest setback in March, when his party lost the governorship over the capital La Paz, as well as the mayor’s seat in the capital’s indigenous sister city of El Alto. One of the first acts by newly elected El Alto Mayor Soledad Chapetón was to open corruption proceedings against union leaders affiliated with MAS.

But the scandal that has most affected Morales involves conflict-of-interest charges concerning a government contract awarded to Chinese engineering company CAMC. The president’s former lover, with whom he fathered a child, holds a high-ranking position in the company.

A report claiming that the surge in microcephaly cases in Brazil was due to a pesticide and not the Zika virus set off a wave of panic across the country and prompted one state to cancel the chemical’s use. But the report was lambasted as scientifically baseless by the international medical community and dismissed by Brazil’s Ministry of Health. LAND’s Cleuci de Oliveira spoke to Rio Grande do Sul Secretary of Health João Gabbardo dos Reis about his controversial decision to halt the use of a pesticide that is instrumental in the fight against the Aedes aegypti mosquito.

Despite the passage of a new transparency bill, Mexican government agencies do little to track the spending habits of their employees, some of whom spend hundreds of dollars a day while traveling on official business, according to a Reuters investigation.

Representatives from the Inter-American Human Rights Commission on Sunday said officials in Mexico are resisting the Commission’s efforts to investigate the 2014 disappearance of 43 students in Guerrero state, detailing, among other things, leaks of statements allegedly made by arrested suspects.

Haiti’s provisional President Jocelerme Privet said he is committed to meeting deadlines and assured that his interim government will last no more than its designated 120 days in a press conference Friday.

Puerto Rico’s public agencies are cracking down on tax evaders and small business owners who have stolen services like water and electricity in a desperate effort to recuperate funds amid a debt crisis.

A New York Times article contrasts U.S. President Barack Obama’s planned trip to Cuba to President Calvin Coolidge’s visit to the island over 80 years ago, explaining that unlike Coolidge’s cursory trip Obama is hoping to take a “serious stride towards cementing this policy change toward Cuba.”

Fernando Cardenal, a Jesuit priest from Nicaragua famous for ignoring a Vatican order to resign from the left-wing Sandinista government in 1983, died on Saturday at the age of 82.

The international Financial Action Task Force has removed Panama from its blacklist of countries that fail to meet standards against money laundering, an apparent sign of progress for a country frequently seen as a regional financial hub for crime and corruption.

A Peruvian political survey published Sunday suggested that the country’s presidential elections may see a June runoff as neither candidate Keiko Fuijimori nor Julio Guzmán is projected to earn a clear majority in the first round of votes.

Colombian President Juan Manuel Santos indicated that the FARC must hold to the March 23 deadline for a peace accord in spite of the rebels’ continued concern over the details of implementing a disarmament plan.

A study released by the World Bank demonstrated that Latin American indigenous people have disproportionately remained in poverty during a period of regional economic growth between 2000 and 2010, with 36 percent living in insecure, unhealthy environments.

Brazil’s Supreme Court has ordered the release of Senator Delcídio do Amaral, who was arrested in November for charges of obstructing a federal corruption investigation into state-run oil company Petrobras. Amaral will be able to return to the legislature while he is reviewed for impeachment.