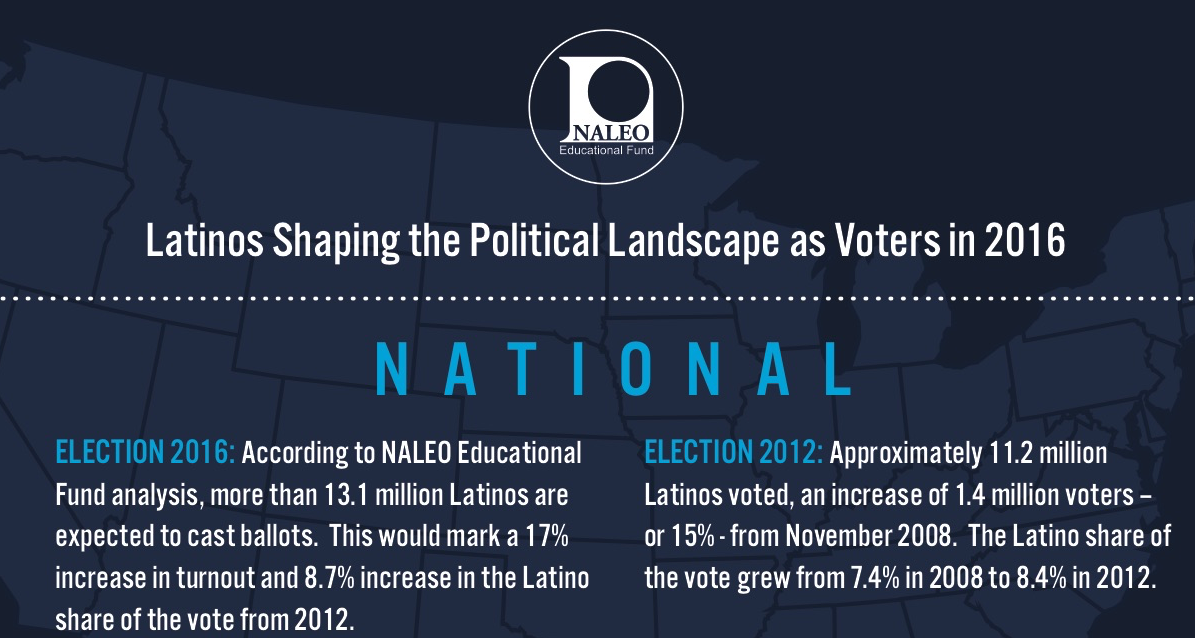 Following up on a prediction that Latino voter turnout will reach almost 200,000 voters in 2016, the National Association of Latino Elected and Appointed Officials (NALEO) Educational Fund announced today that the number of Latinos voting across the nation in 2016 will exceed 13.1 million voters. If NALEO’s predictions hold true, this would mean a 17% increase from Latino voter turnout in 2012. The following graphic from NALEO breaks down what they are reporting: However, NALEO also noted that there are 27.3 million Latinos who are eligible to vote in 2016, meaning that despite reports that the Latino electorate is growing in the United States, NALEO’s turnout predictions for 2016 would still be at around 48%. According to Pew Research, the voter turnout rate for Latinos in 2012 was at 48%. Here is what Pew reported:

Earlier this year, Pew said that 12 million of the country’s 27.3 million eligible Latino voters are millennials.

The lack of a stronger Latino voter turnout number does have some analysts thinking that at least on the Republican side, going after the Latino vote won’t really matter. As Ramesh Ponnuru wrote in December:

The most plausible winning formula for Republicans in 2016 would involve their performing at least somewhat better among all racial groups. In the RealClearPolitics tool, input the average turnout rates for each group over the last three elections. Then assume that Republicans get 9 percent from black voters, 32 percent from Hispanics and 35 percent from Asians and others — all numbers lower than the percentages George W. Bush won in 2004. In that case Republicans would just need to do two points better among whites to score their biggest electoral win since 1988, carrying Colorado, Florida, Ohio, Pennsylvania and Virginia.

Later in his piece, Ponnuru added:

First: Republicans do not absolutely have to get 40 percent of the Hispanic vote to win. Second: Republicans have no good reason to obsess about Hispanic voters to the exclusion of black and Asian voters. Third: If Republicans end up winning, it will probably be because they improved in all racial groups, albeit unevenly, which is what they did in elections from 1996 through 2004.

2 thoughts on “NALEO Predicts ‘More Than 13.1 Million Latinos’ Will Vote in 2016 National Election”