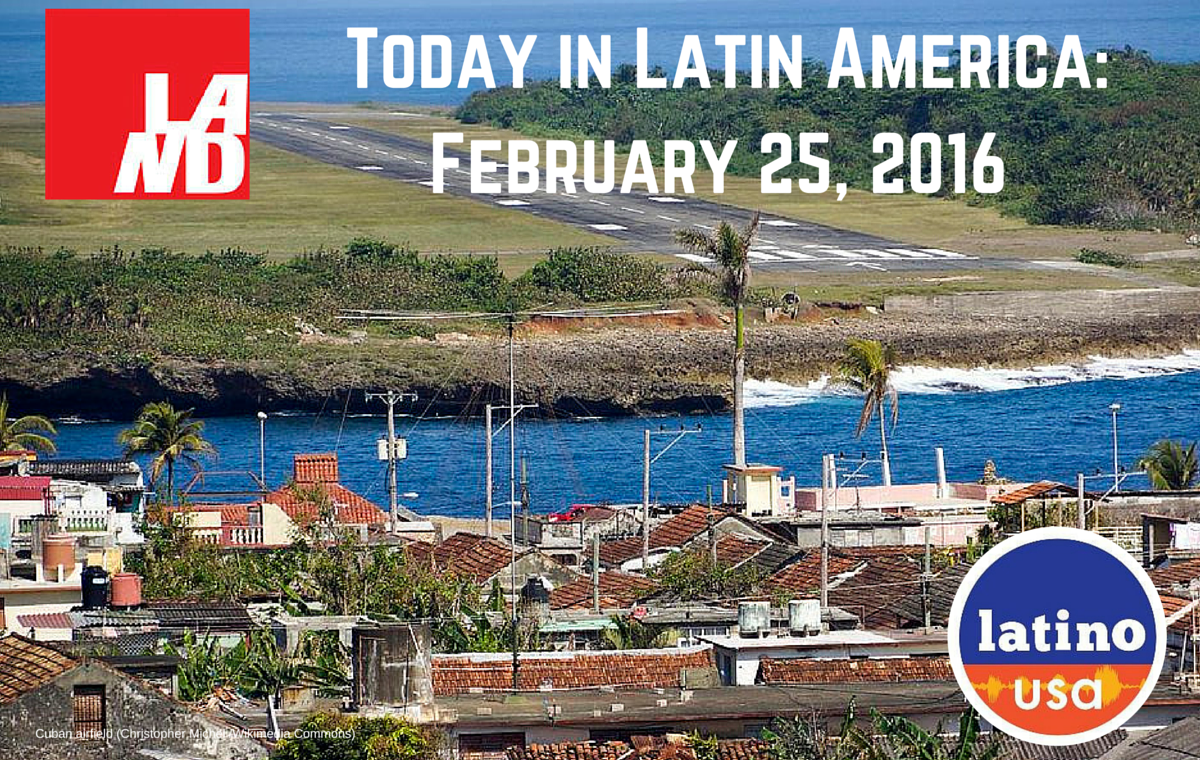 Top Story — Cuba on Wednesday granted seven of the country’s most well-known dissidents, out on parole while serving prison sentences ranging from 18 to 25 years, permission for a one-time trip abroad as a reward for good behavior. Several of the dissidents expressed skepticism over the decision and interpreted the move as a diplomatic gesture ahead of U.S. President Barack Obama’s visit to the island in March.

“It appears to be some kind of gift they want to present to Obama, but in reality it is nothing concrete because when we come back we will return to legal limbo,” Martha Beatriz Roque, one of the seven dissidents, told Reuters.

Obama has pushed the Cuban government to improve its treatment of political opponents. Critics note, however, that arbitrary arrests increased in 2015, despite the thaw in diplomatic relations between the Caribbean nation and the United States.

The seven dissidents were among 75 people arrested in 2003 during a crackdown on anti-government activity that became known as the Black Spring. All 75 protesters remained incarcerated until 2010 to 2011, when the Roman Catholic Church and Spain brokered an agreement for their release on the condition that they permanently leave Cuba. Eleven of the dissidents refused the terms of the agreement, and continue to serve their sentences while out on parole. The reason why only seven of the 11 dissidents still in Cuba were granted the trip abroad was not immediately clear.

The United States supported the decision made by the Cuban government, while expressing hope that the travel opportunity was also extended to the four remaining dissidents.

“We welcome the news,” Peter Boogaard, a White House National Security Council spokesman, said in a statement, “and we continue to encourage the Cuban government to allow the remaining four former prisoners to travel as well.”

Mexican President Enrique Peña Nieto made his first visit to the town of Iguala since the disappearance of 43 students following an attack in the city 17 months ago. Peña Nieto spoke at a military ceremony there, during which he made only a fleeting reference to the probable massacre of the students.

Starting Sunday, the New Orleans Police department will no longer need to check the immigration status of people they suspect of being undocumented, and no one will be required to prove they are a citizen to the police, a new policy meant to relieve anxiety among undocumented immigrants and improve the relationship between city police and immigrant communities.

U.S. policy towards Cuban migrants is under increased scrutiny from Republican politicians, according to an op-ed in the Los Angeles Times, with presidential candidates like Marco Rubio openly criticizing the United States’ ongoing favorable treatment toward Cuban immigrants over other groups.

U.S. Senator Bob Corker said he does not believe Congress will vote to lift the U.S. embargo against Cuba while Obama is still in office, but that it could be lifted in the future if “Cuba were to evolve its behavior,” and if there were tangible results from improved U.S.-Cuba relations.

A plan being put forth by the U.S. Treasury Department in response Puerto Rico’s economic crisis would prioritize pension payments to retirees over payments to bondholders, a decision some fear would have a negative impact on the larger municipal bond market. Supporters, however, maintain that the plan would both protect older residents and discourage further migration to the U.S. mainland.

Hundreds of thousands of small farmers in Central America are facing a food crisis due to a prolonged drought, with some civil society organizations pushing governments to elevate the situation to a national emergency, according to Al Jazeera America.

The Wall Street Journal explores El Salvador’s Comandos de Salvamento, a volunteer first-aid and rescue group that has provided opportunities for youth seeking to avoid involvement with gangs by enlisting them to fight fires and tend to homicide victims.

A former U.S. marine plead guilty to murdering and dismembering his girlfriend, who disappeared in 2011, while the couple lived in Panama.

After Bolivia’s President Evo Morales lost a public referendum that would have made him eligible to run for a fourth consecutive term, he blamed the defeat on “external conspiracies” and sabotage tactics from the opposition.

NPR reports on Colombia’s efforts to closely monitor all pregnant women suspected of having contracted the Zika virus and determine whether a clear link between the virus and the birth defect microcephaly can be established.

On Wednesday, Peru’s electoral board decided to allow the oppositional contender Julio Guzmán to run for president in April’s elections.

According to Venezuelan government sources who spoke to Reuters, the country will be able to make a $1.5 billion payment on its debt by Friday, but its ability to pay further upcoming debts still remains unclear.

The Los Angeles Times reports on the increased influence of China in Latin America, telling the story of local resistance to the Las Bambas copper mine in Peru.

An international team of scientists announced Wednesday that they will study the body of famed Chilean poet Pablo Neruda in an attempt to figure out how the Nobel laureate died after the country’s 1973 military coup led by Gen. Augusto Pinochet.

During a news conference between French President François Hollande and Argentine President Mauricio Macri on Wednesday, the French head of state suggested that Argentina should help with the global refugee crisis by taking in Syrian refugees.