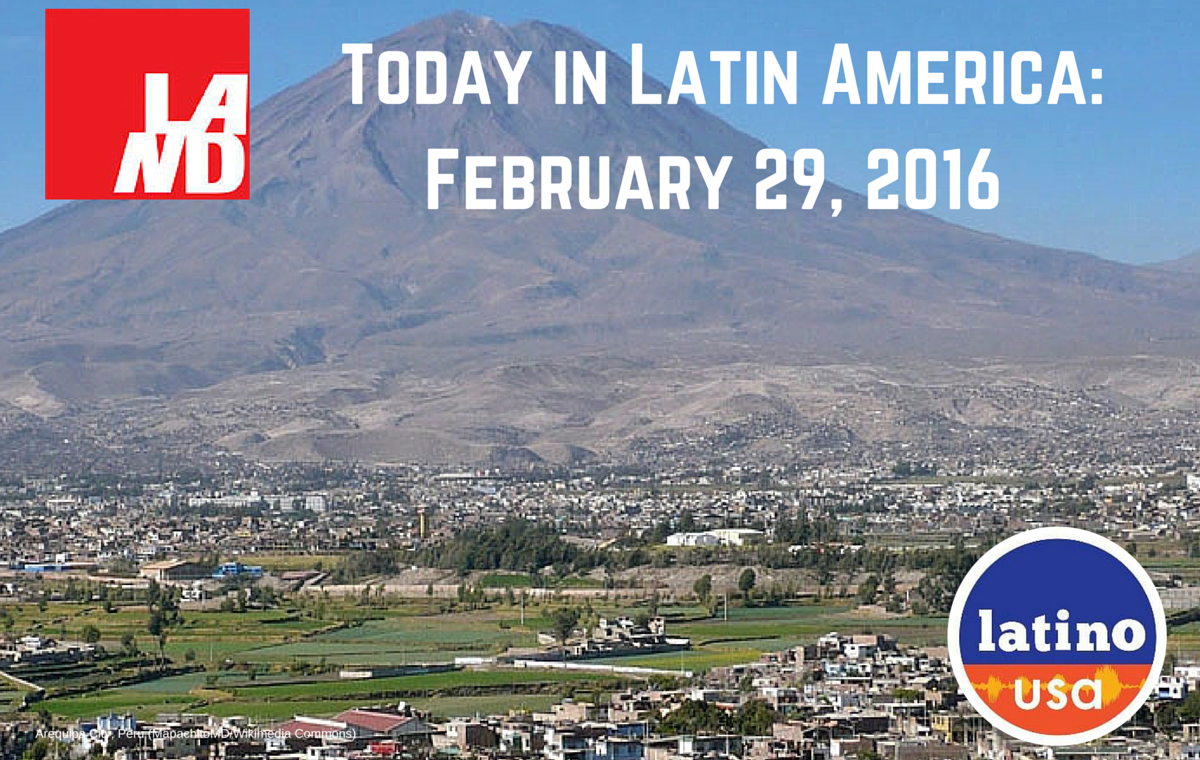 Top Story — The presidents of Peru and Bolivia have both been associated with large-scale corruption investigations in recent days.

A Brazilian federal police report from Feb. 5 asserts that authorities investigating a kickbacks scheme at the state oil firm Petrobras are broadening the scope of their probe, alleging that Peruvian President Ollanta Humala received $3 million in bribes from the Brazilian construction company Odebrecht, which has itself been implicated in the corruption probe. The bribes were allegedly received in exchange for contracts in Peru, where Odebrecht has a number of ongoing projects. The police report cited emails in which a former Odebrecht executive seemed to be referencing a $3 million payment to “OH,” who is believed to be the Peruvian president.

Maristela Basso, a professor of International Law at the University of São Paulo, told The Associated Press that “Brazil will probably request further investigation from Peruvian authorities” as a first step, with a trial in a Brazilian court as a potential consequence. Humala’s office has denied any wrongdoing.

Bolivian President Evo Morales, meanwhile, is also being associated with an ongoing corruption investigation. Gabriela Zapata, Morales’ ex-girlfriend, was taken into custody on Friday after being accused of taking part in an influence trafficking scheme involving high-paying government contracts. Zapata, who is a high-ranking executive at China CAMC Engineering Co. Ltd., has not yet been officially charged by authorities, but opposition politicians have already raised claims that President Morales gave and received favorable contracts with the Chinese firm, which Morales denies.

Both probes have put pressure on the Andean leaders, in addition to the Petrobras investigation’s devastating political impact on Brazilian President Dilma Rousseff. João Santana, a Rousseff campaign aide who also advised Humala in 2011, is currently under arrest in conjunction with the Petrobras probe. Morales, meanwhile, is still reeling from the results of the public referendum held this month, which was supposed to pave his way toward a re-election but was instead met with rejection, a defeat observers have linked in part to the revelation of his ties to Zapata.

Mexican authorities announced on Sunday they have freed at least 87 women from captivity by criminal gangs in Mexico City, where they were forced into sex slavery in illegal clubs.

Business Insider reports on how increased heroin use in the United States has fueled a cycle of violence in Mexico’s Guerrero state, where the trade in the drug has become increasingly lucrative.

An increase in Puerto Rican migration to the United States mainland due to the territory’s economic crisis has impacted the U.S. presidential race as candidates scramble to pick up support from Puerto Ricans, who are allowed to vote in primary contests.

Egypt has extradited a French criminologist and aviation security expert to the Dominican Republic for allegedly aiding in the escape of two pilots who were convicted of transporting 26 suitcases of cocaine in an airplane.

The U.S.-educated economist and former head of Haiti’s central bank Fritz-Alphonse Jean was installed as Haiti’s interim prime minister on Friday, despite protests from legislative allies of former President Michel Martelly, whose successor is slated to be chosen on April 24 in a rescheduled runoff.

A Guatemalan court convicted a former army officer and a paramilitary fighter for holding 15 women in sexual and domestic slavery, and for murdering three, during the country’s civil war. The ruling was the first time a court in Guatemala had sentenced individuals for such a crime.

Colombian criminal investigators have been excavating a cemetery in the former rebel-dominated area Macarena for the past two weeks in order to identify 464 bodies from unmarked graves, contributing to a genetic database that seeks to recover information about disappeared people from the armed conflict.

Venezuelan state-run oil company PDVSA may face difficulties in completing some of the $5.2 billion in debt payments it must make this year, an unprecedented risk which has business partners scrambling to limit their exposure to the firm.

The agency representing Colombia’s indigenous population has warned of signs the rebels of the ELN have taken over areas vacated by the FARC, who are due to sign a peace accord with the government on March 23.

The U.S. Centers for Disease Control and Prevention (CDC) issued a warning Friday urging pregnant women not to attend the 2016 Olympics in Rio de Janeiro in order to avoid contracting the Zika virus, the agency’s first explicit warning against attending the games due to the disease.

Former Brazilian President Fernando Henrique Cardoso will face a police investigation into his alleged use of a private company to pay the mother of his illegitimate child $3,000 per month after their 6-year-long love affair.

Argentine President Mauricio Macri met with Pope Francis at the Vatican Saturday to affirm amicable relations between the two leaders after they clashed about gay marriage. In 2009, when Macri was mayor of Buenos Aires and Francis the city’s archbishop, Macri denied an appeal to a gay couple suing the city for denying them marriage rights, a decision Francis opposed.

A judge called upon former Argentine President Cristina Fernández de Kirchner Friday to testify among 12 other people in a case regarding the Central Bank’s alleged sale of dollar futures at below-market rates to bolster the Argentine peso.