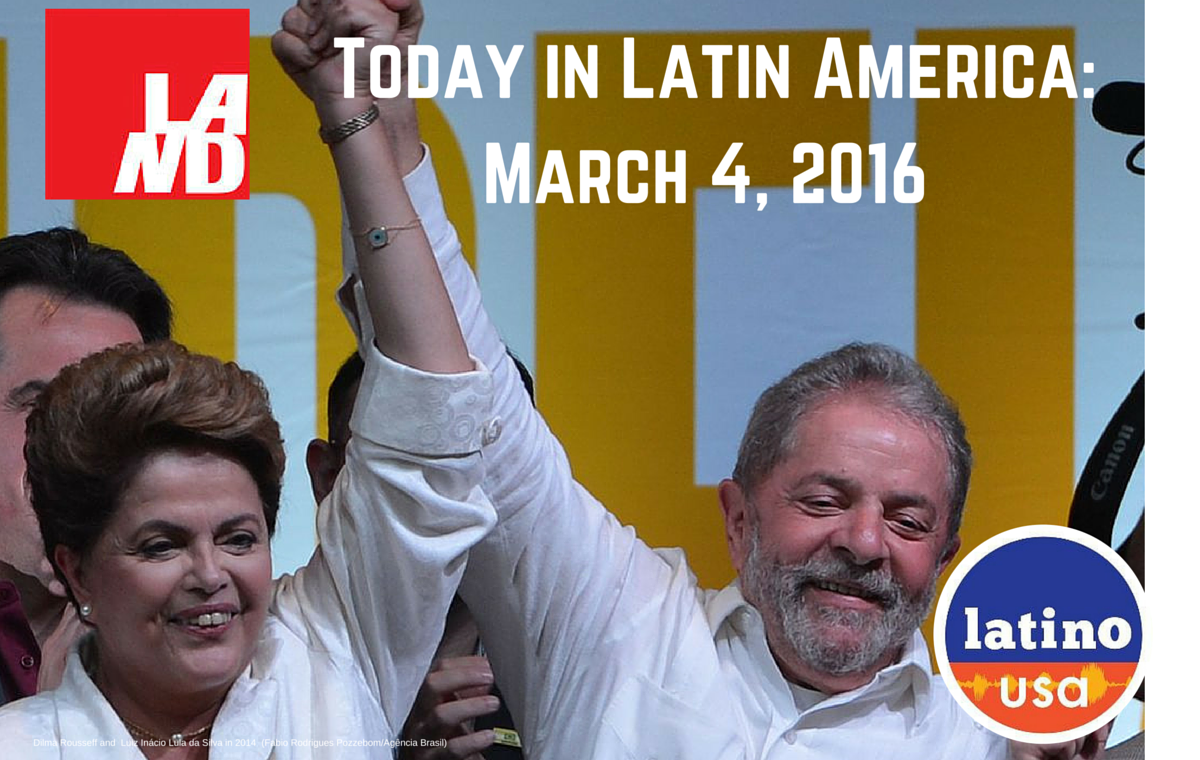 Top Story — Former Brazilian President Luiz Inácio Lula da Silva was brought in for questioning by police on Friday, as part of an investigation into a multi-billion dollar kickback scheme at the state-run oil firm Petrobras. Silva’s residence —and that of his son— were raided, also on Friday, as part of the probe.

The latest phase of the investigation known as Operation Car Wash targets Silva, several of his family members and the president of his foundation, the Lula Institute, according to Brazilian newspaper Folha de S. Paulo.

The 33 search-and-seizure warrants and 11 warrants for questioning executed on Friday stunned observers. Silva, long considered Brazil’s most popular president, has consistently denied any involvement in the multi-billion dollar scheme that has taken down key members of his Workers’ Party.

Friday’s warrants come one day after news reports of a plea deal being negotiated by fallen Workers’ Party Senator Delcídio do Amaral, in which he accuses both Silva and current President Dilma Rousseff of participating in the Petrobras scheme.

In a letter, Rousseff questioned the veracity of Amaral’s allegations, and said that she repudiates “the abusive use of leaks as a political weapon.” Folha de S. Paulo reports that, prior to releasing the letter, Rousseff reacted to the alleged plea deal by referring to Amaral with an expletive in front of four of her most trusted advisors.

Rousseff’s opponents say Amaral’s alleged revelations strengthen the case for her impeachment. The president’s approval ratings are currently at 11 percent, according to The Wall Street Journal, as she faces corruption charges and a worsening economic outlook. On Thursday, the Brazilian government released figures that show that the country’s gross domestic product shrank by 3.8 percent in 2015, the biggest contraction in 25 years.

Ahead of U.S. President Barack Obama’s visit to Cuba, authorities have found the island’s tourism infrastructure stretched too thin and have begun moving American tourists out of hotels in Havana and to beach resorts which are usually off-limits to U.S. citizens.

After an AP report confirmed Haiti is still plagued by high rates of cholera, U.N. human rights experts have chastised their own organization for failing to take responsibility for the epidemic, the origin of which has been traced to U.N peacekeepers.

The lauded Honduran indigenous leader Berta Cáceres was shot dead on Thursday in her home by multiple gunmen, which observers say was likely linked to her efforts to protect indigenous communities from a proposed dam project.

FARC leaders can freely travel again to guerrilla encampments, the Colombian government said Thursday, reversing a decision from two weeks ago that forbade their free passage after they allegedly violated the terms of an existing agreement by publicly carrying weapons.

The workers’ union from Colombia’s largest coal mine El Carrejón voted to strike Thursday over pay and benefits, a decision that may have implications for the country’s commodity-based economy, which has taken a recent downturn.

Venezuela’s opposition coalition will mobilize a three-part strategy to expel Nicolás Maduro from the presidency, a leader confirmed Wednesday, by seeking to lower term limits, calling for a referendum and publicly pressuring Maduro to resign.

U.S. President Barack Obama is being urged by activists in Argentina to reschedule his planned trip there, which happens to fall on March 24, the 40-year anniversary of the military coup that installed a brutal (and initially U.S.-supported) dictatorship.