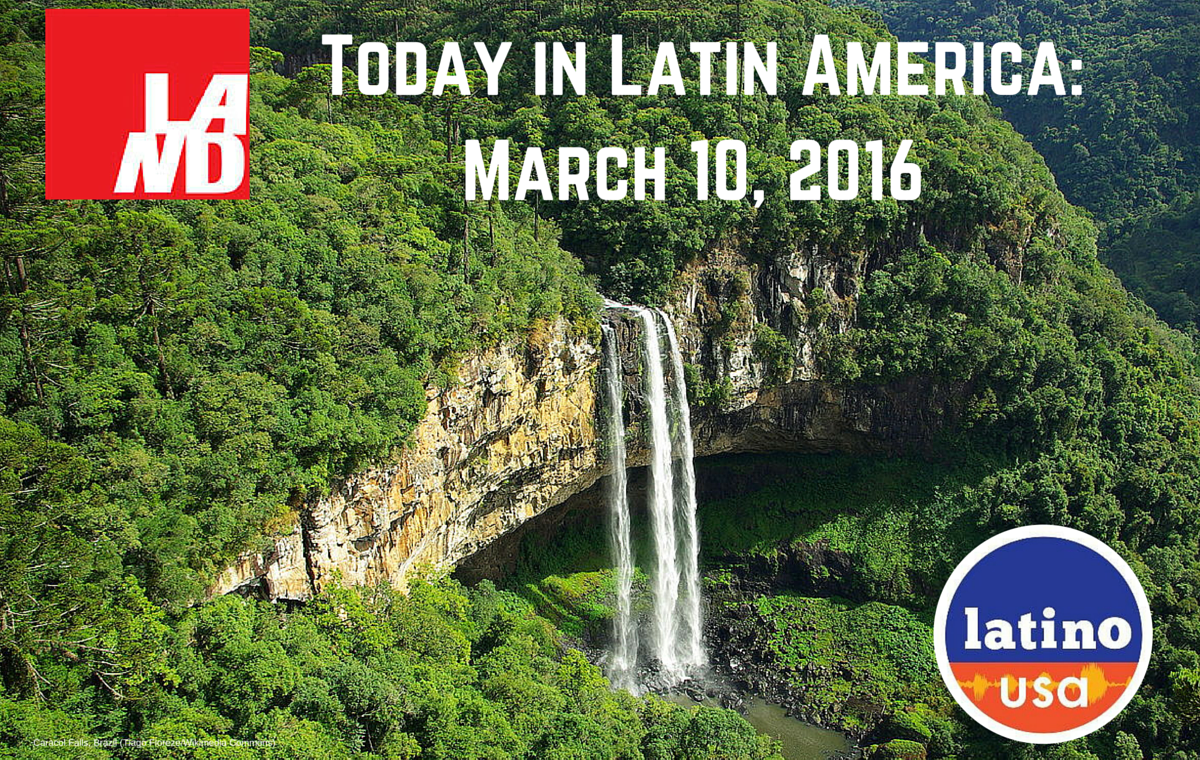 Top Story — Former Brazilian President Luiz Inácio Lula da Silva was indicted on Wednesday for grand larceny and money laundering, among other crimes, over his alleged relationship with a construction firm that saw him trade government contracts for personal favors.

The firm, OAS, has been implicated in the corruption scheme unfolding at state oil giant Petrobras. The charges against Silva place additional pressure on the once-mightily popular leader, less than one week after he was detained for questioning by federal police over his role in the Petrobras scheme, and four days ahead of nationwide anti-Workers’ Party demonstrations scheduled for this Sunday.

A judge will still need to accept the charges filed on Wednesday, however, before Silva officially becomes a defendant in the sweeping federal probe.

The charges against Silva stem from renovations made to a weekend home in the Brazilian countryside and a beachfront triplex apartment in the popular resort town of Guarujá. Prosecutors contend that Silva secretly co-owns both properties, and that renovations were made to them in exchange for political favors (link in Portuguese). The beachfront property is listed under construction firm OAS.

The former president has denied the accusations, saying that he had only ever been to the apartment on two occasions, and that the country house is owned by friends who have let him stay there in the past. An expert consulted by The Associated Press said that no documentation has yet been found linking the beachfront property to Silva, but that the probe into the country house may turn up evidence of money laundering.

Silva left office in 2010 with record-high approval ratings. But the revelations of an expansive graft scheme at Petrobras, as well as a deepening economic recession, has led to a plunge in his once-unmatched popularity. His Workers’ Party successor, current President Dilma Rousseff, is experiencing historically low approval ratings and faces calls for her impeachment.

Former Mexican President Vicente Fox said in reaction to Donald Trump’s election gains that the presidential hopeful’s victory would result in a trade disaster between the two nations, citing Trump’s stated objective to impose tariffs on goods imported from Mexico.

Mexico’s interior ministry assured the public that a stolen canister of radioactive waste that disappeared over a week ago has been found and remains sealed, the third incident of radioactive theft reported since late 2013.

The Mexican American Legal Defense and Education Fund sued the University System of Georgia in a federal suit Wednesday for denying in-state tuition to two college students who entered the United States illegally as children but have temporary legal status under the Deferred Action for Childhood Arrivals.

A federal judge in Puerto Rico has ruled against same-sex marriage, deeming the U.S. territory exempt from the Supreme Court’s decision to allow the practice anywhere in the United States and blocking an initiative to forbid enforcement of Puerto Rico’s ban against it.

President Barack Obama will not meet with former Cuban President Fidel Castro during his visit to the island nation later this month, a U.S. national security advisor told Reuters, as the trip seeks to forge stronger future ties between the two countries rather than dwell upon past Cold War tensions.

Meanwhile, Cuban state newspaper Granma has published an editorial in anticipation of the visit, indicating that Cuba will not shift its national policies to facilitate normalized relations with the United States.

Guatemalan national police have arrested the country’s former congressional leader on charges of bribery and influence trafficking for his alleged attempt to pay off a judge. The arrest is part of a larger corruption case involving the country’s former president and vice president, both of whom are currently imprisoned.

Peru’s electoral council announced that it will not be allowing Julio Guzman, the main presidential contender to front-runner Keiko Fujimori, to run for office, claiming that his own party broke rules in the process of selecting him as their candidate. Wealthy businessman César Acuña was also barred from running after the electoral court alleged he had handed out cash to potential voters on the campaign trail.

Colombian President Juan Manuel Santos announced that the government may not be able to meet an impending deadline for the peace deal with the FARC, set for March 23, due to disputed points within the deal.

Despite progress on the historic peace deal in Colombia, The Guardian reports that left-wing activists continue to be killed across the country, including a string of killings in the past few weeks.

Maximilien Arvelaiz, Venezuela’s charge d’affaires in Washington, has withdrawn from his post and returned to Venezuela after U.S. President Barack Obama renewed a series of sanctions on several Venezuelan officials.

Brazil announced that it had lowered the size of a baby’s head circumference required for it to be diagnosed with microcephaly in order to align its norms with the World Health Organization, but the number of cases reported in the country continues to rise. The WHO has said that a vaccine for the virus is still years away.

The Guardian reports on a toxic algal bloom that has killed millions of salmon in Chile, devastating the country’s salmon exporting industry, which is the second largest in the world.

Chilean Gen. Sergio Arellano Stark, infamous for leading a death squad called “Caravan of Death” during the country’s 1973 military coup, died Wednesday at the age of 94. He had been sentenced to 6 years in jail in 2008 for his crimes, but was saved from jail time because he had Alzheimer’s disease.