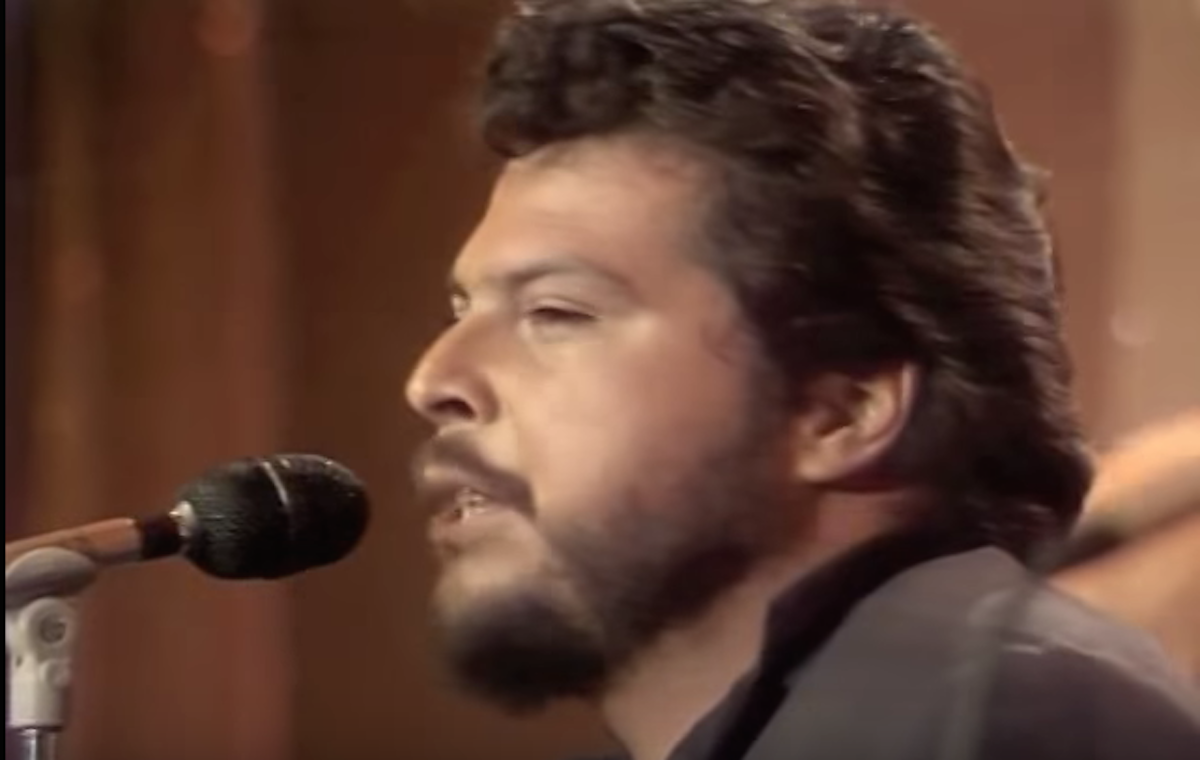 In my distant memory, which I feel can be more fictional than real these days, I think I recall a day in 1982 when I was back at home from school in my Bronx apartment and watching The Merv Griffin Show.

I was 12 or 13 years old, and just beginning to expand my musical taste beyond The Sugar Hill Gang, The Beatles and Styx (don’t ask). I had started to listen to New Wave bands like Split Enz and The Cars, and one of my friends had just told me about some band called The Ramones. As I settled on my couch with a 100% sugary Pepsi by my side, there was Merv:

Two things raced by me as I watched this group called The Monroes play one really catchy as hell New Wave song. First: these guys seem to really like Split Enz.

Second: the lead singer with the beard looked much browner than the rest of his blonde bandmates. In fact, he kind of looked a bit like of one my dad’s friends from Puerto Rico. Back then, my teenage hunch had no confirmation. But later in life, I was able to confirm that the lead singer of The Monroes was Latino.

I am obsessed with “What Do All the People Know,” kind of like how my colleague Antonia Cereijido is obsessed with Justin Bieber’s new music. The New Wave gem from The Monroes is perhaps one of my favorite songs of the early 1980s. I bought the 45 somewhere in Manhattan (or was it Yonkers?) when it came out. I recorded it for a New Wave mix tape during high school and when college came along, I played it late at night after the kegs were tapped and everyone just kept on dancing. I played it in the 90s off a CD. I made sure it was part of my first iPod in the early 2000s. And now the song lives with me forever in the cloud. I mean, how can one NOT love this song?

And every time I played the song with friends, I think I would always say at some point, “You know, the lead singer is Puerto Rican?” My friends would look at me as if I were crazy, but since these were the days before Google, no one really challenged me.

Then, when someone named Tony Ortiz posted the actual 1982 Monroes appearance from The Merv Griffin Show on YouTube in 2010, I started to connect the dots and realize that I wasn’t that far off with my theory. Confirmation came last year when my fellow Rebeldes reached out to Ortiz to ask him straight up if he were Puerto Rican or Mexican or Chicano or Latino. This is what he told them: “My father was from Michoacán, and so was my mother’s side. I was born here in the USA.”

The lead singer of The Monroes was Mexican American.

I had to talk to Ortiz, and when the Latino USA team decided to premiere an entire show about Latinos in rock & roll, the time to talk with Ortiz was now.

So after getting his email through a mutual friend, I connected with Ortiz this week and we talked over the phone. He was in Minnesota. I was in Boston. Here is our conversation:

Julio Ricardo Varela: So The Merv Griffin Show. That was kind of a big deal. I mean, Merv was the it thing at the time.
Tony Ortiz: I know, right. (He laughs.) It was like being on Ellen right now. I mean, if you are on Ellen, then you’re the sh*t. (I laugh.) Or Jimmy Fallon, or something like that. I think it was probably 10 million people watching on that Merv Griffin thing.
Julio: Wow.
Tony: So it was a lot of people. We also knew that. You know, being Mexican and being in a very non-Mexican band, I mean, not traditional at all, although I never really got into that now. But now I am, now I want to get into my roots because you know, Los Lobos, everything else, all the old songs my dad used to play. My dad was a mariachi singer.

Julio: I didn’t know that. So where did you grow up?
Tony: I grew up in San Diego, but I ended up here in Minneapolis about 20 years ago. I grew up in Oceanside, California, which is a northern town from San Diego proper. I grew up in the barrio, where there was nobody but Mexicans and Blacks, and my grandmother owned a little market with a tortillería in the back. She made her own tamales and all that good stuff. So it was a main hub for everyone to go to, so I got to listen to a lot of music: R&B, Mexican traditional music, everything that you can think of was going through that little barrio.
Julio: Yeah.
Tony:  And I grew up in the 60s. I saw The Beatles movie when I was 8 years old. I went and walked downtown to go see it by myself. And I went in, paid the ticket and sat there with all the screaming white girls. I listened to The Beatles, they were just fantastic and I just fell in love with them.

Tony:  I started playing music when I was 13. I started singing. And that’s when I kind of got into the blues, and some R&B stuff, and it just kept going. It kind of hit me like a ton of bricks, and then I started playing professionally when I was 16. I was playing with all the older guys in town, then before that we actually moved inland, about 30 miles to a completely white neighborhood. So a whole other aspect of my existence started in that part of California, a town called Escondido.
Julio: So you were a Mexican family in a predominantly white town…
Tony:  Yeah…
Julio: Interesting. So what music influenced you at the time, late 60s..
Tony:  The Doors, there was a lot of music that was happening then. All the stuff that was going on. I listened to a lot of Rolling Stones and The Doors. I listened to the radio like religiously, you know, everything I could listen to and copy and memorize the lyrics to.

Tony:  It’s kind of the same story a lot of us have. Your gravitate towards that, and that’s the thing that pulls you in. And then, then you play out. Then you play it at Grape Day Park when you’re 13, and there’s a crowd of a hundred people and they’re digging it. And you’re doing your thing and it feels good, and that’s what grabs you and takes a hold of you and you say, “God, I want to do this for the rest of my life.”
Julio: So how did a Mexican kid named Tony Ortiz get into New Wave and become a member of The Monroes?
Tony:  Wait, it gets better than that. My legal name is Jesús. On the album, if you find the EP, I put Jesús Ortiz there and not Tony Ortiz.

(Sidenote: Jésus Ortiz is the guy in the back inside the second “O” in this Monroes cover.) Julio: Oh really?
Tony:  Yeah, because even at that time, I was 26 then, I wanted to be Mexican. I wanted to be standing out. Los Lobos were starting to make it, and stuff was starting to happen for Latinos at that time. Even at a slow place, it started to happen. So I wanted to be known as the Mexican in this New Wave band, which makes it even more stranger and different with Jesus as a name.
Julio: So let me ask you this: here it is, the early 80s. The height of New Wave. There weren’t a lot of people name Jesús Ortiz in that scene. You guys have this crazy hit. Were people at the time asking you about this, you being Mexican and being a lead singer for a New Wave band?

Tony:  No, no, because there wasn’t any Mexican or Latino awareness in the business at the time. I mean, it was real underground if it was or that nobody talk about it. Now the kicker is that the drummer of The Monroes Jonnie Gilstrap is half-Mexican. His mom is more Mexican than los nopales, you know what I mean? Although he didn’t really have this sense of wanting to be Mexican as much as I did. And really, when you put me in a band with a bunch of white people, I look Italian. (He laughs.)
Julio: Yeah, like who’s that Greek dude singing?
(He laughs again.)
Julio: But did you feel like you had to suppress that?
Tony:  Well, yes and no. Because I used my name —Jesús— I didn’t want to suppress it, but once I got into that whole thing, it just seemed like it really didn’t make a difference. Nobody really asked me about it. It wasn’t any kind of topic or anything. It didn’t do what I thought I wanted it to do it at that time to be kind of Hispanic or Latino.

Julio: Do you think you were ahead of the curve?
Tony:  Nah, I didn’t even think of it. But when I think of it now, I’m like, but maybe I was, but I wasn’t doing it for that. I was doing it because I was very proud of where I came from. When we were making it, and we were doing shows all over the country, and doing shows in San Diego, the people would line up around the block. My uncle, my dad and all the relatives would come see me, and they’re all dressed up, you know how our people are, they like to get dressed up. And they’d come to the show at a New Wave club, so there’s all the New Wave thing, but then there’s my uncle, my tíos, my tías, my dad, my mom—and they’re having a great time. And I knew that I made it. They were proud of me.

The rise and fall of The Monroes is a classic tale of how fickle the music business can be. The band had signed with a new label from Japan (Alfa Record) that was trying to make it big, but Alfa quickly ran out of money. As one story says:

“Unfortunately, Alfa Records closed its doors — literally while “What Do All the People Know” was soaring up the charts. When that happened, the single stalled at number 59. With no promotion, its momentum was lost and it started to fall. The band’s one post-Alfa record deal led nowhere as they were caught in a change of regime, a full album was never released and The Monroes were never able to score another deal.”

Ortiz eventually moved to Minnesota and he stills plays music there, including “What Do All the People Know.” He also has some new songs: