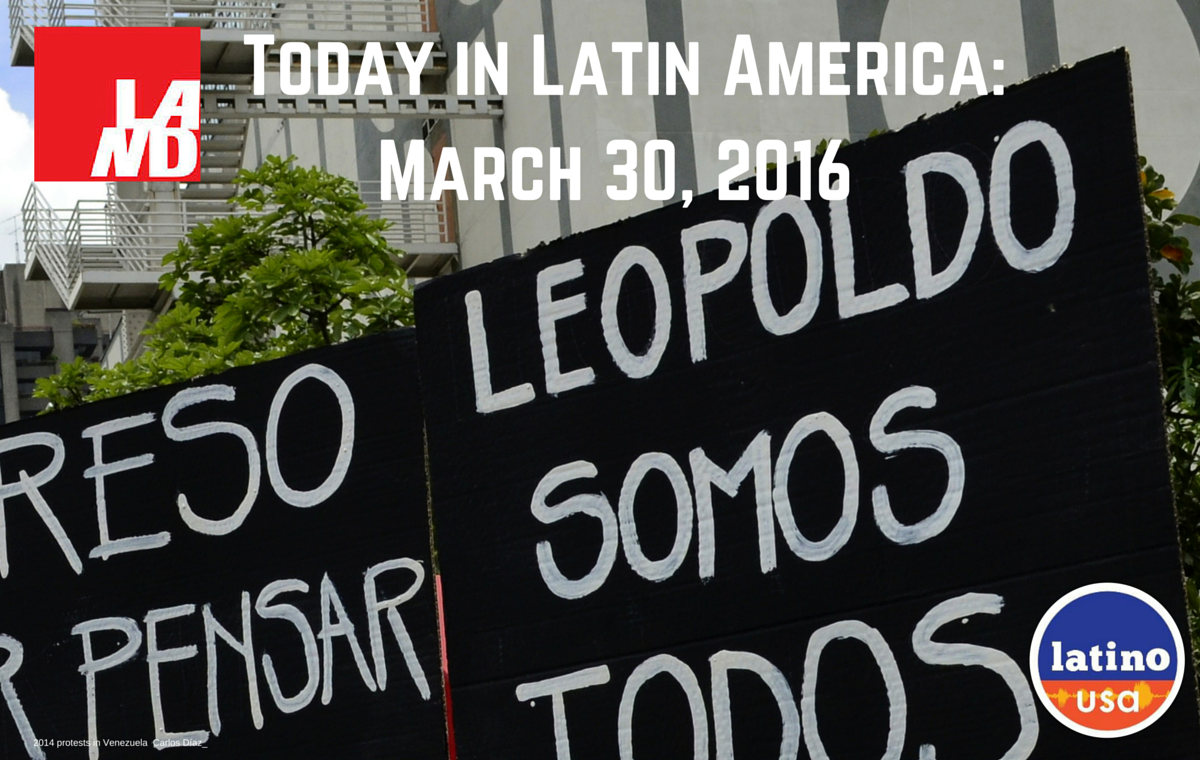 Top Story — A political showdown in Venezuela is likely to intensify after lawmakers in the National Assembly voted late on Tuesday to pass an amnesty bill covering jailed opposition leader Leopoldo López and more than 70 others, which President Nicolás Maduro said he will veto, The Associated Press reported.

Demonstrators had gathered in an informal street demonstration to voice their objection to the government’s decision to double bus fares earlier this month. Similar informal protests are becoming increasingly common, averaging 17 small-scale demonstrations per day since the beginning of the year, according to the Venezuelan Observatory of Social Conflict, The Associated Press reported.

Tensions are high amid a spiraling economy and as the leftist Maduro grapples with the recently elected opposition National Assembly for control. A Supreme Court sympathetic to Maduro blocked the appointment of three opposition lawmakers in December, and later reversed the legislature’s attempt to review the appointment of the justices themselves, who an earlier, and far more pro-government, cadre of legislators had rushed to appoint before the end of their terms. The latter led to protests, including in San Cristóbal.

That city, in particular, has been the source of frequent student-led anti-government protests, some of which helped to launch a nationwide movement in 2014 that led to López’s imprisonment.

The Mexican Soccer Federation launched its “Embraced by Soccer” campaign Tuesday, urging fans to stop anti-gay and other discriminatory chants during games, some of which drew fines from FIFA earlier in the year.

Mexico’s electricity wholesale market secured a long-term supply of clean energy from generators during a first-of-its-kind auction on Tuesday, a success that is expected to lower energy costs and help Mexico meet environmental goals.

The alleged rape of a girl in Veracruz, Mexico by four college students from wealthy families has generated controversy and protests, with demonstrators demanding that the privileged youths be punished.

The U.S. House Republicans released the latest draft of a plan to rescue Puerto Rico from an economic tailspin, which calls for putting Puerto Rico’s finances under a presidentially-appointed oversight board, a deal-breaker for critics in the U.S. territory who cite concerns about sovereignty.

Cuba’s state newspaper Granma on Monday published a front-page article addressing unusually frank criticism by members of its ruling Communist party, who have called for openness ahead of a key party meeting on April 16, when leaders will outline the next phase of economic and political reforms.

Authorities in El Salvador declared a state of emergency at seven prisons, putting inmates on lockdown, suspending family visits, and transferring nearly 300 high-level gang members, as the start of “extraordinary measures” against gangs, whose leaders reportedly asked their members over the weekend to observe a cease-fire in an apparently failed effort to discourage the crackdown.

A court in Costa Rica sentenced four of the seven men accused of the 2013 murder of environmentalist Jairo Mora, and the rape of four volunteers with him, to decades in prison.

A Colombian judge sentenced Bogotá’s ex-mayor Samuel Moreno to 18 years of prison on Tuesday for bribery after he allegedly accepted $2 million in kickbacks for ambulance contracts, charges Moreno denies and says he will appeal in international courts.

The Catholic archbishop of Peru’s second largest city Arequipa said Tuesday that it would be a “sin” to vote for two top presidential candidates in Peru because of their positions on gay marriage and abortion, comments that incited public critique of the country’s subsidies to the Catholic church.

The Brazilian Democratic Movement Party announced Tuesday its decision to depart from the government of President Dilma Rousseff, dramatically increasing her vulnerability to impeachment, which could now happen within months.

The United Kingdom’s Foreign Office said Tuesday that it does not accept a U.N. Commission’s ruling expanding Argentina’s maritime territory to include the Falkland Islands, a decision that has also lowered share values by more than 5 percent for a British oil company operating there.

Brazilian federal lenders have suspended $35 million of funding for an Olympics facility, a court-ordered decision stemming from suspected fraud among the two building companies that have pre-existing corruption charges in association with the Petrobras scandal.