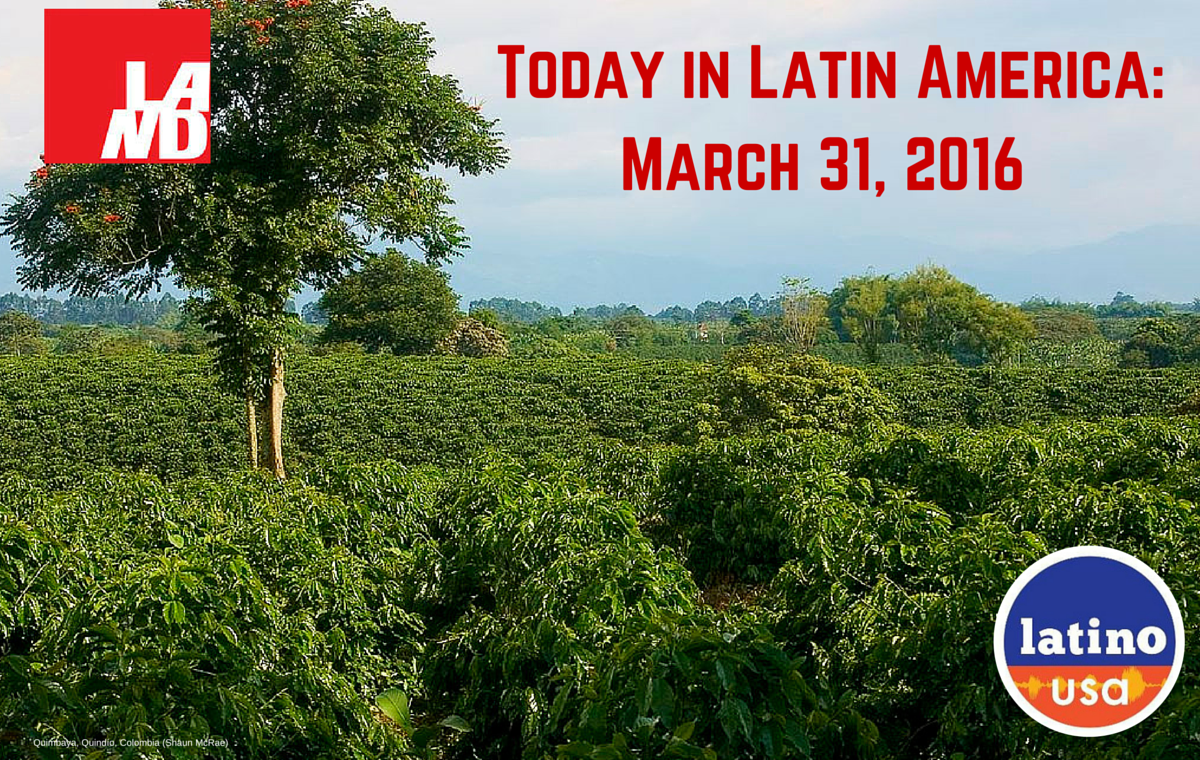 Top Story — The Colombian government and rebels from the National Liberation Army (ELN), the country’s second largest left-wing rebel group after the FARC, announced on Wednesday that they will hold official peace talks.

The declaration during a press conference in Caracas, Venezuela, comes just one week after Colombian government and FARC negotiators in Havana missed their March 23 deadline to reach a peace deal. Both sides have expressed their commitment to come to an agreement, but still disagree on several key issues.

The ELN has been engaging in exploratory talks with the government for more than a year, but have maintained offensive tactics like kidnapping and bombing oil pipelines along the Venezuelan border. Kidnappings of government and military officials during the last few weeks prompted President Juan Manuel Santos to caution the group against “missing the peace train.” As of Wednesday, the two sides had agreed to negotiate on a six-point agenda beginning in Quito, Ecuador.

Inspired by the 1959 Cuban Revolution, the ELN was founded in 1964 by Marxist Jesuit priest and supporter of liberation theology, Camilo Torres. The rebel group is estimated to have some 2,000 active fighters, and has focused its attacks on large landowners, international companies and oil pipelines to highlight their conviction that natural resources should be collectively owned by the Colombian people rather than by foreign multinationals.

Expressing hope for the talks, President Santos said, “If we can make peace, it will be the end of guerrilla fighters in Colombia and thus in Latin America.” Many are hopeful that the new set of talks could help to end the more than 50-year long civil war that has claimed the lives of some 200,000 people and displaced millions. Yet critics say that negotiations with guerrilla groups won’t necessarily lead to peace, as right-wing paramilitary groups and government forces continue to commit violence throughout the country.

Mexico City has ordered all vehicles off the road for one day a week in an effort to curb pollution as the notoriously smoggy capital city undergoes its worst air-quality crisis in over a decade.

Mexico’s government is urging the media to avoid distributing a music video to the song “Fuiste Mía” by singer Gerardo Ortiz because it “trivializes and promotes violence against women,” by depicting Ortiz tying up and locking a woman in the trunk of his car after she cheated on him.

A newly released Human Rights Watch report alleges that the Mexican government doesn’t follow its own laws when dealing with child migrants from Central America, often failing to inform them that they can apply for refugee status.

Unusual levels of dissent have erupted among Cuba’s Communist Party, as members of the party express criticism with newly imposed levels of secrecy regarding plans for economic and social reforms ahead of the Communist Party congress next month.

Despite concerns across Latin America about the effects of the Zika virus on newborn babies, the Los Angeles Times reports that for many pregnant Central American migrants traveling to the United States, the virus falls low on their long list of concerns.

The International Monetary Fund announced Wednesday that it will be closing its Nicaragua office in August because it has successfully reduced poverty and debt in the country, which has “maintained macroeconomic stability and growth.”

Costa Rican police detained over 100 African migrants attempting to illegally enter the country through Panama, as immigration authorities increase their presence on the southern border due to the growing number of Cuban migrants camped out in Panama and hoping to travel north. Over 1,000 Cuban migrants are currently stuck at the Panama-Costa Rica border, a situation that could pose a fresh immigration crisis after some 6,000 Cubans were airlifted out of Central America earlier this year.

Peruvian President Ollanta Humala has signed a decree that will raise the country’s monthly minimum wage 13 percent, a move that preempts the electoral promises of several presidential candidates —including former Prime Minister Pedro Pablo Kuczynski— ahead of next month’s first round of voting.

Kuczynski’s campaign faced another setback Wednesday when Peru’s lower electoral board announced that it is opening an inquiry into whether he broke a recently passed law against vote buying. Front-runner Keiko Fujimori faced a similar inquiry and was cleared of wrongdoing, leading some to believe that Kuczynski will be similarly cleared.

Chinese state-owned company Sinosteel has signed a contract with the Bolivian government for the building of a steel mill at El Mutún iron-ore mine, a project that the administration of President Evo Morales has already failed to get off the ground twice in the past 10 years.

In a victory for Argentina’s recently elected pro-business President Mauricio Macri, the country’s Senate approved a repayment deal to the country’s international holdout creditors, ending a 15-year saga that has limited Argentina’s access to international credit markets. The deal, which was a central electoral promise during Macri’s campaign, now gives Argentina until April 14 to pay its creditors.

Just over four months before the start of the Olympics in Brazil, the country’s minister of sport has resigned after his Brazilian Republican Party broke off from President Dilma Rousseff’s ruling coalition.