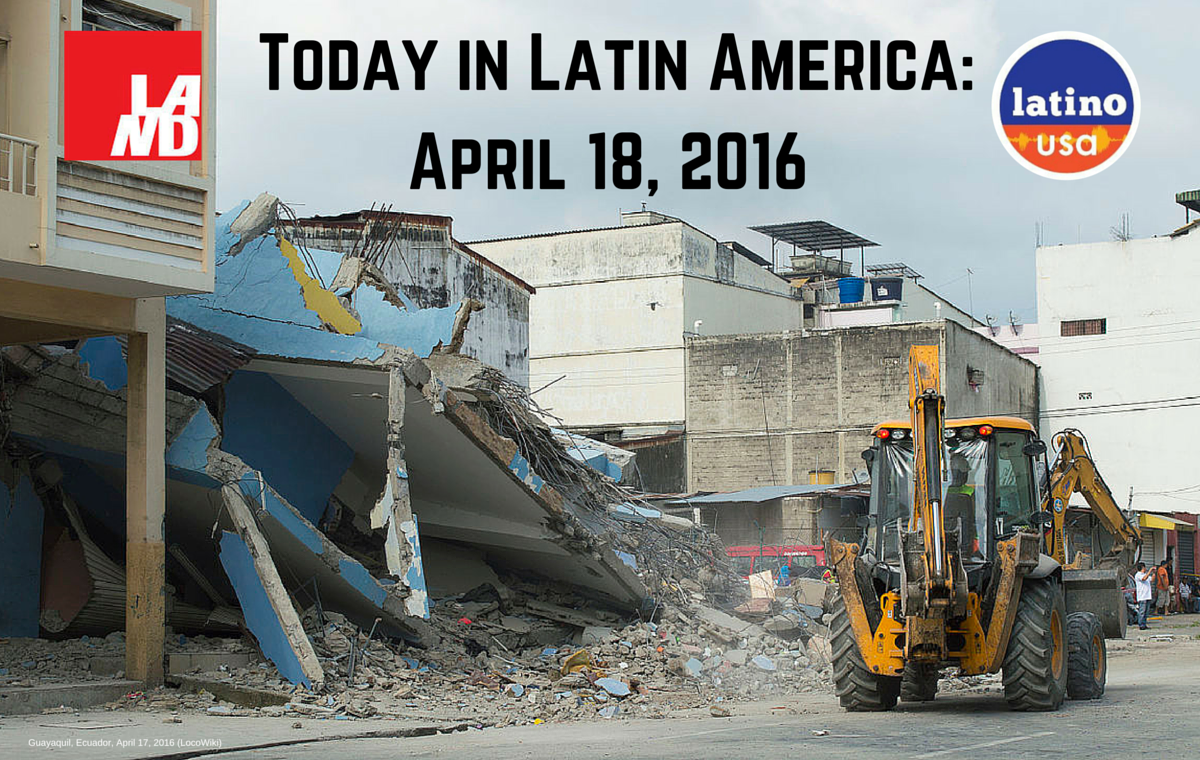 Top Story — Residents of rural Ecuadorian towns west of Quito are reeling following the country’s most devastating earthquake in 40 years. The 7.8-magnitude quake struck Saturday night near the town of Muisne, although the greatest damage to life and infrastructure was felt in the coastal region of Manabí.

Residents of Manabí’s regional capital Portoviejo, located 300km south of the Muisne epicenter, recall forces strong enough to lift people off the floor during the minute long quake and numerous aftershocks. In total, 272 people were killed and some 2,527 people were injured with numbers expected to rise. After assessing the situation, the Spanish Red Cross said on Monday that as many as 100,000 individuals made be in need of assistance following the quake.

Along with the loss of life, nearly 370 buildings were destroyed in Portoviejo, leveling much of the city. Buildings and bridges were destroyed as far away as Guayaquil, Ecuador’s largest city located nearly 500 km south of the epicenter.

Ten thousand troops and 3,500 police officers have been sent to Manabí to establish order and aid in rescue operations. Additional relief workers attempting to reach affected areas have struggled with roads and riverways blocked by landslides.

Ecuador’s President Rafael Correa cut short a trip to the Vatican to return to the Pacific coast and, in an address from Portoviejo, encouraged Ecuadorians to continue rescue efforts and offered words of comfort.

“If our pain is immense, still larger is the spirit of our people,” he said.

Countries throughout Latin America have offered assistance and supplies. Venezuela and Colombia have organized airlifts while Chile and Mexico have sent teams of relief workers.

Brazil’s lower house of Congress on Sunday voted to impeach President Dilma Rousseff, a decision that now takes the impeachment vote up to the Senate, where a simple majority in favor of impeachment will definitively remove Rousseff from office. LAND’s Cleuci de Oliveira reports on the historic decision from the South American nation’s capital, Brasília.

The U.S. Supreme Court will hear arguments brought by 26 states seeking to challenge President Barack Obama’s executive order on immigration reform today, a case that will affect millions of undocumented immigrants seeking a place where they can be “visible,” according to a profile of one immigrant family in The New York Times.

Mexico’s Defense Secretary Salvador Cienfuegos Zepeda formally apologized for a February 2015 video-recorded incident of two soldiers and a federal police officer torturing a woman, calling it an “unacceptable event” in his televised speech on Saturday.

Federal agents announced this week that they discovered a 140-foot-long tunnel connecting Mexico and California near the Calexico Port of Entry, noting that “anything or anyone could potentially cross into the U.S.”

Cuba’s President Raúl Castro used his two-hour address during a meeting of the country’s Communist party as a platform to criticize U.S. democracy, saying he saw no difference between Democrats and Republicans, and that Cuba must defend its one-party communist system. Castro also said that the future top leaders of Cuba’s Communist Party should retire at 70, in order to encourage younger leaders to rise to the top ranks.

CNN analyzes the class-action lawsuit against Carnival Cruises, which says that the company is discriminating against Cuban-Americans who are barred from sailing on new cruises between Miami and Cuba. A spokesperson for Carnival said the restriction comes from Cuban laws, not the company’s policies.

Activists working to protect Puerto Rico’s Northeast Ecological Coastline, one of the Caribbean’s most important nesting sites for leatherback sea turtles, are being honored with a top environmental prize.

An anti-corruption commission has alleged that Guatemala’s former President Otto Pérez Molina and his vice president took at least $25 million in bribes from Spanish port company TCB, which won a contract to operate a container terminal on Guatemala’s coast for 25 years. Pérez Molina is expected to appear in court next week.

Christine Lagarde, head of the International Monetary Fund, said on Saturday that financial regulators had long been “alarmed” by Panama’s loose taxation and evident corruption, and that the international community needs to take concrete action rather than simply issue reports in the future.

A piece in The Nation argues it is time for the U.S. government to apologize for its intervention in El Salvador’s brutal civil war, particularly in light of Obama’s recent expressions of regret for past policies in Argentina and Cuba.

At least nine people were injured during environmental protests in honor of murdered Honduran human rights activist Berta Cáceres, after assailants attacked demonstrators, and threatened them with death.

Peru announced its first case of a sexually transmitted Zika infection in Lima, an area that had yet to report any previous cases of the disease.

The U.N. General Assembly is convening a special session this week to address the failures of global drug policies, where Colombian President Juan Manuel Santos is expected to present more humane alternatives in order to fight the root cause of the issue rather than focusing on prohibition and criminalization.

Over the weekend, heavy rains in Chile inundated the surrounding areas of Santiago, a situation that has caused two large copper producers, Codelco and Anglo American Plc, to shut down operations in their mines.

In the wake of the impeachment vote by Brazil’s lower house of Congress on Sunday night, Chief of Staff to President Dilma Rousseff, Jaques Wagner, expressed his confidence that the Senate will dismiss the impeachment proceedings against her.