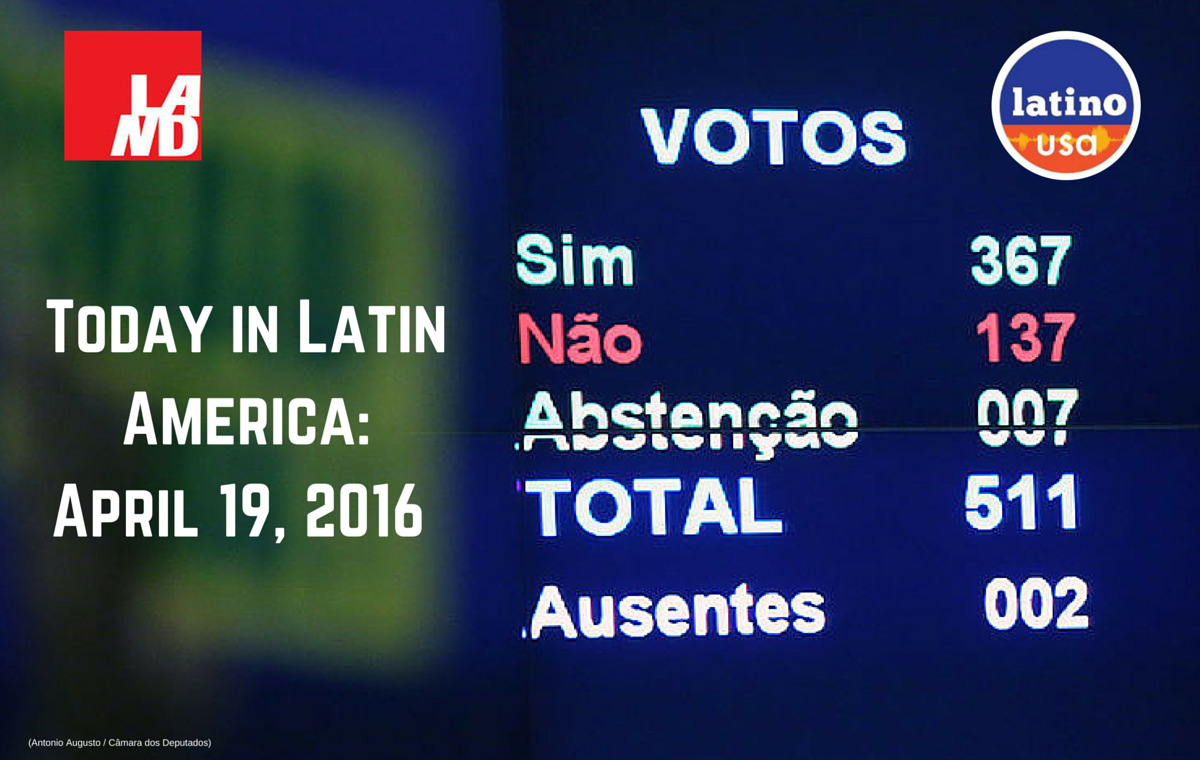 Top Story — Brazil’s President Dilma Rousseff on Monday spoke out against the decision the night before by the lower house of Congress to proceed with her impeachment, vowing to fulfill her mandate until she is forced to step down, The Associated Press reported.

After 367 of the 513 members of the Chamber of Deputies voted for Rousseff’s impeachment, the process will move to the Senate, where the government will now focus its efforts, a Rousseff aide told Reuters.

That chamber’s current leader, Renan Calheiros, has not called for Rousseff to step down, but instead for new elections to be held. He has previously assisted the president, helping her pass a budget deal in 2015 and delaying a probe into the charges on which she could now be impeached, Reuters reported.

Rousseff, for her part, stands accused of misusing funds from the state development bank to conceal a budget deficit; she has not been charged with illicit enrichment. Calheiros, like Chamber of Deputies Speaker Eduardo Cunha and Vice President Michel Temer, with whom he shares a party, has been accused of corruption. Temer will assume the presidency if Rousseff steps down, although polls suggest a majority of Brazilians would favor his impeachment as well.

As Reuters notes, Calheiros’ Brazilian Democratic Movement Party (PMDB) has pressured him to call a speedy vote to confirm an impeachment trial for Rousseff, and observers have suggested Calheiros is unlikely to oppose his party’s wishes. If the Senate vote passes, Rousseff will be forced to step down immediately, pending the trial’s outcome.

In her remarks, Rousseff compared her current situation to the torture she suffered under the dictatorship that ruled Brazil from 1964 to 1985, and denied having committed a crime. “The acts they’re accusing me of were committed by other presidents before me and weren’t considered criminal or illegal,” she said, reported Folha de S. Paulo.

Rousseff’s staff is likely aiming to convince Calheiros to delay the vote, which would give the administration time to sway lawmakers to its side. Unlike in the Chamber of Deputies, where a two-thirds majority was needed to continue with Rousseff’s impeachment, a simple majority in the Senate will confirm the process.

Investigators into the disappearance of 43 teacher-trainee students who went missing in September of 2014 tell Reuters that the army is withholding key evidence, including photos and videos of local police clashing with the students. The military has also refused to let investigators interview soldiers who served in the area.

Following popular protests and public statements by politicians including U.S. Secretary of State John Kerry, the Carnival cruise line will allow Cuban-born travelers to book tickets on the company’s planned Cuba-bound cruises, even though such voyages remain illegal under Cuban law.

In an address to the country’s Communist Party, Cuba’s foreign minister criticized the visit by U.S President Barack Obama as a, “a deep attack on our ideas, our history, our culture and our symbols,” the second high-profile leader to distance the Party from the opening of diplomatic relations with the United States.

As the Cuban Communist Party’s congress, held every five years, concludes today, prominent party officials have called for the continuation of Cuba’s particular pace of reform, which aims at maintaining the fundamentals of its economic model while attempting to spur economic growth and a measure of foreign investment.

Beginning his week-long visit to the United States, Guatemalan President Jimmy Morales petitioned the United Nations to extend the mandate of the International Commission Against Impunity in Guatemala (CICIG) anti-corruption body until 2019.

Panama’s Canal Authority said on Monday its has begun taking reservations for ships to pass through its widened canal locks, due to open on June 26 to a class of ships dubbed “New Panamax.”

In an interview with former LAND contributor Danielle Mackey, the Mexican activist Gustavo Castro discussed witnessing the murder of his Honduran colleague Berta Cáceres and the subsequent harassment he faced by the authorities in her country. Cáceres strongly opposed a major hydroelectric project, and Castro said her murder forms part of a regional trend in which he highlighted the role of foreign treaties that incentivize dam construction.

After an earthquake with a magnitude of 7.8 devastated Ecuador on Saturday, the dramatic rescue of survivors trapped in the rubble gave citizens hope that more survivors could be found, despite the official death toll rising to over 400.

Eulogio Del Pino, Venezuela’s oil minister, stated that the country’s relationship with OPEC was badly damaged after a meeting over the weekend in Doha meant to freeze oil production levels ended in disagreement.

On Monday, Argentina announced a bond issue of up to $15 billion, the first time the country has entered the international bond market in 15 years following its recent settlement of a dispute with a group of U.S. creditors.

The AP reports that Brazilian authorities, in the 1940s and 1950s, successfully eradicated the Aedes Aegypti, the mosquito which carries the Zika virus, an outcome they are unlikely to repeat today due to the porous nature of modern borders and the limited resources at their disposal amid a historic economic crisis.

On Monday, Chile’s health ministry announced the discovery of the same mosquito within the country’s borders. Earlier cases originating in the country had been sexually transmitted.