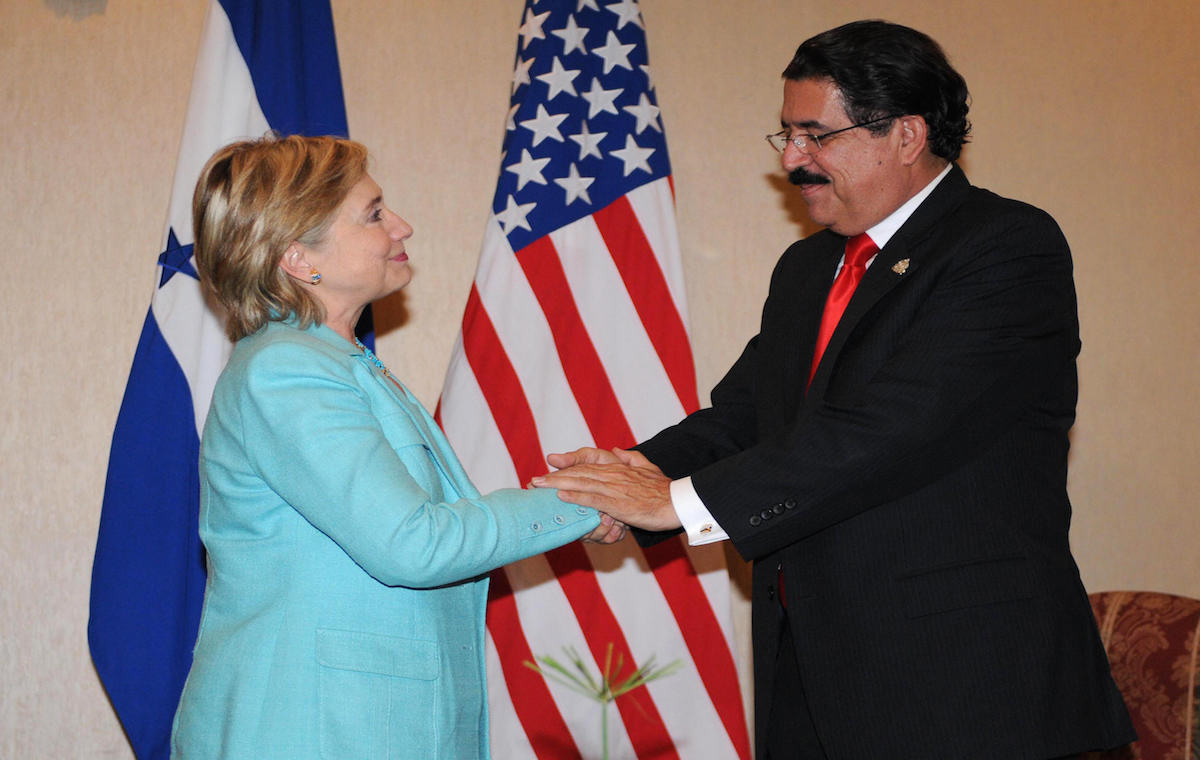 On June 28, 2009, Hillary Clinton faced her first major international crisis as Secretary of State when about a hundred members of the Honduran military entered the Honduran presidential palace, arrested President Manuel Zelaya in his pajamas  and put him on a one-way flight to Costa Rica. The incident was widely considered around the world to be an illegal coup of the kind Latin America hadn’t seen since the 1980s.

It was perhaps the biggest Latin American political crisis during her tenure in the State Department. Critics said her actions essentially legitimized a right-wing coup. Recently, her response to the crisis has been coming back to haunt her. Since the change in power, Honduras has dealt with one of the highest murder rates in the world and an embarrassing corruption crisis. And the recent murder of human rights activist Berta Cáceres has journalists drawing a line between the high numbers of politically-motivated murders in the country and Hillary Clinton’s role in executing White House policy towards Honduras back in 2009. You could call the “Benghazi” of the Latin American left.

So what exactly did Hillary Clinton do during the Honduran coup?

Shortly after the removal of Honduran President Zelaya, the position of the U.S. was more-or-less was in step with the Organization of American States and the larger international community. Clinton condemned the move and refereed to the incident as a coup in a press conference the day after.

As time wore on, however, the U.S. stopped using the word “coup” to refer to the incident opting instead for “constitutional crisis.” Eventually, after various negotiations, the U.S. offered support for the post-coup government to hold new elections, and unlike the EU and most of Latin America, the U.S. did not demand reinstatement of ousted president Zelaya. Elections went forward in 2009 with support of the U.S. and just a handful of other countries, and a candidate from the conservative party that backed the coup won. Clinton critics say the Obama administration gave credibility to elections widely seen as fraudulent at the time.

In a 2016 editorial board interview with the New York Daily News, Clinton defended the State Department’s policy, arguing that Zelaya’s removal was legal under Honduran law. “Now I didn’t like the way they did it, but they had a very strong argument that they followed the constitution and the legal precedents,” Clinton said.

Jorge Silva, director of Hispanic media for the Clinton campaign, told Latino USA back in March that Clinton “engaged in active diplomacy that resolved a constitutional crisis and paved the way for legitimate democratic elections.”

But Dana Frank, a Latin American history professor at UC Santa Cruz who follows Honduras closely, disagrees with that. “I think it’s exceedingly terrifying that we have a former Secretary of State and current presidential candidate saying this coup was legal,” Frank said, calling the U.S. policy in Honduras “a reassertion of US military power in the hemisphere and it’s the reassertion of a corporate transnational economic agenda.”

Frank points to a 2009 cable released by Wikileaks from the U.S. Embassy in Honduras advising Clinton that Zelaya’s removal was illegal. She and other critics have also raised eyebrows at the presence of lawyer Lanny Davis, a friend of the Clintons as well as Bill Clinton’s former lawyer from the impeachment trials, in the affair. Davis was contracted as a consultant for a group of pro-coup Honduran businessmen at the time, and emails released by Clinton show she suggested using him to back-channel with the coup government.

And the late Bertha Cáceres called out Clinton for passages in her book Hard Choices that indicate she maneuvered to scuttle the issue of Zelaya’s reinstatement.

However, Clinton supporters say there is little to gain from relitigating the Honduran crisis. Dan Restrepo, who worked in the White House on the U.S. response to the crisis, said this is not an example of the U.S. returning to the bad old days of supporting Latin American military coups.

“One of the the interesting things about this whole experience was how different this was in the sense that the United States was not behind it,” Restrepo said. “The United States came out very quickly and denounced it, and worked very actively to undo it and find the quickest path to restoring democratic and constitutional order.”

For more on the Clinton-Honduras controversy and the Clinton campaign’s response, listen to the Latino USA’s radio piece.

3 thoughts on “Hillary Clinton and Honduras: The Left’s Benghazi?”