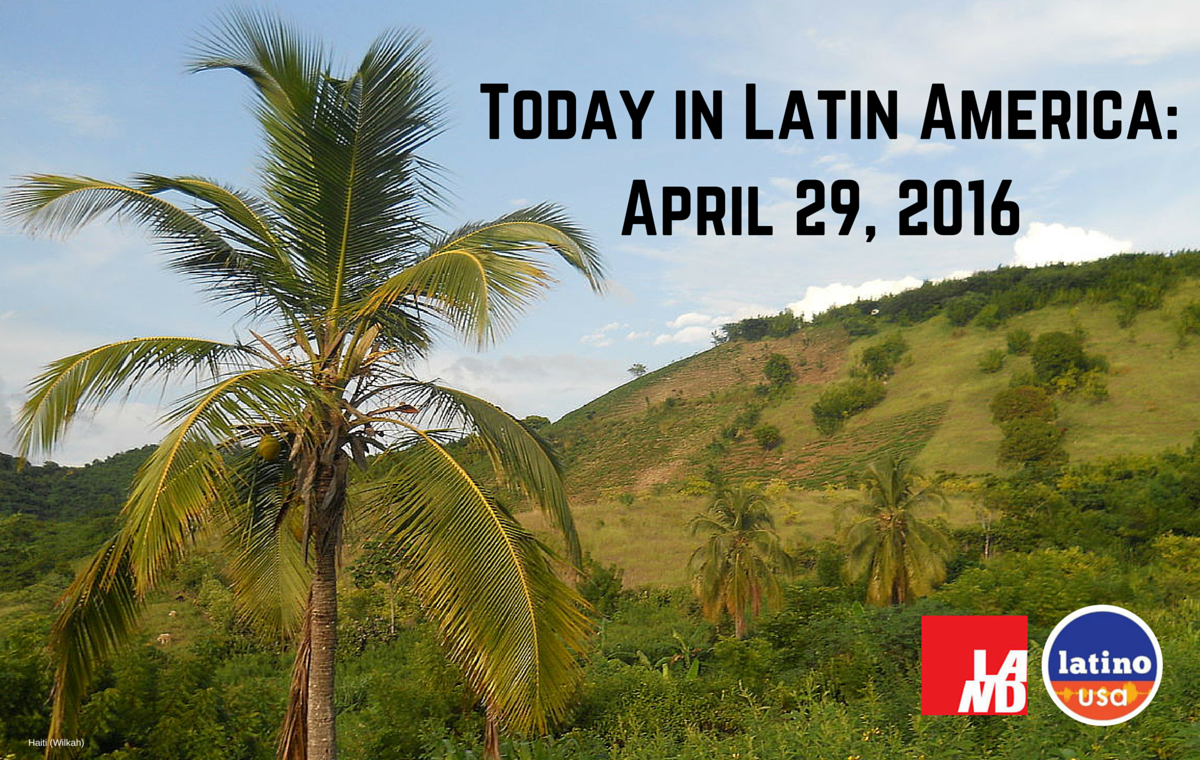 Top Story — The U.S. State Department’s coordinator for Haiti, Kenneth Merten, arrived in Port-au-Prince Thursday “to assess progress” in the country’s troubled presidential election, a phrasing meant to avoid the perception of meddling in Haiti’s affairs, The Associated Press reported.

A run-off scheduled for April 24 was delayed for the third time, after which thousands of Haitians protested in the capital, demanding the opportunity to cast their votes. More demonstrators gathered Thursday and rival political factions clashed outside of Parliament while Merten held meetings, before being dispersed by riot police with rubber bullets.

Haiti’s interim President Jocelerme Privert said the run-off election may not happen until October. He was meant to hand power over to an elected leader on May 14, but said that the transition will not be possible until Haitians have confidence in their electoral system.

Before his trip Merten had told the Associated Press Haiti’s verification process needs to be clarified because of lingering concern that political actors could try to “manipulate the process.”

Privert has independently moved forward and selected a five-person commission to evaluate last year’s election ballots. The verification panel has 30 days to conclude its work.

Merten’s trip comes after U.S. Secretary of State John Kerry warned Haiti to expedite their electoral process or risk losing international support. Speaking in Miami, Kerry said, “there’s a clear limit to the patience, the willingness of the international community to condone this process of delay.”

The United States has remained firmly opposed to an electoral recount of last year’s contested elections, even amid fraud allegations. Haiti’s opposition, human rights groups, and Haitian-American leaders have spoken out against the U.S. government’s hardline stance, the Miami Herald reported.

Haiti’s last elected president, Michel Martelly, enjoyed U.S. support, reported Jon Lee Anderson in The New Yorker. In Haiti’s last election, after a recount ensured Martelly would pass to a second round a result disputed by his opponent Jude Célistin, then-Secretary of State Hillary Clinton flew to Haiti in 2011 in an apparent show of support for Martelly.

Martelly’s protege, Jovenel Moïse, won the most votes in first-round polling in January; Célestin, his main rival, insists the first-round results in October were fraudulent and has promised to boycott the runoff.

The United States has a history of heavy-handed influence in Haiti. U.S. troops invaded in 1994, and U.S. policy was blamed for contributing to a coup in 2004.

The parents of Mexico’s 43 missing students who disappeared in September 2014 have called for the firing and subsequent prosecution of the chief of the country’s criminal investigation agency following revelations that the agency mishandled bone fragment evidence tied to the students.

A general in Mexico’s Army was sentenced to 52 years in prison for ordering the torture and then burning the body of a man suspected of killing a soldier in 2008. The sentence is one of the longest ever to be issued against a military official in Mexico.

Two Cuban-born U.S. residents dropped their lawsuit against the Carnival Cruise line after Cuba changed a policy allowing people born on the island to return to the country by boat, a move that will allow for the company’s first cruise to depart to the island from Miami on Sunday.

Britain’s Foreign Minister Phillip Hammond plans to restructure Cuba’s debt with the UK and to forge “new links” between the two countries during his visit to the island this week, the first for a British minister since 1959.

Thursday saw Guatemala end a three-year hiatus from the international bond market with an offering of $700 million of 10-year notes at a 4.6% percent yield, underscoring Guatemala’s favorability for investors due to its fast economic growth and small government.

Rescue workers on Thursday searched for survivors of a landslide at a dump in Guatemala City. At least 18 people could be missing, authorities said.

Venezuela’s opposition-led congress voted on Thursday to censure Food Minister Rodolfo Marco, thus ordering President Nicolás Maduro to dismiss him, in response to chronic, widespread shortages, which contributed in part to nationwide incidents of looting on Tuesday and Wednesday.

Colombia legalized gay marriage on Thursday, becoming the fourth country in Latin America where LGBT couples have the same marital rights as heterosexual ones. The decision came three weeks after Colombia’s constitutional court struck down a long-contested ruling that defined marriage as only between a man and a woman, laying the groundwork for gay marriage to become legal.

After the former governor of the Colombian province of Choco was released earlier this month from captivity by members of leftist guerrilla group the National Liberation Army, the former governor told the AP on Thursday that his release was conditional on his brother replacing him as a hostage.

Brazilian President Dilma Rousseff’s campaign strategist was arrested on Thursday, along with his wife, in connection to the investigation into the multi-billion dollar kickback scheme at Petrobras. The arrest of João Santana, who was considered the architect of Rousseff’s electoral victories in 2010 and 2014, places additional pressure on the beleaguered president as Brazil’s Senate prepares to vote in the coming weeks on whether she will be impeached.

Protesters in Brazil who oppose the impeachment process against the president, meanwhile, staged demonstrations on Thursday by halting traffic on dozens of highways in major cities across the country.