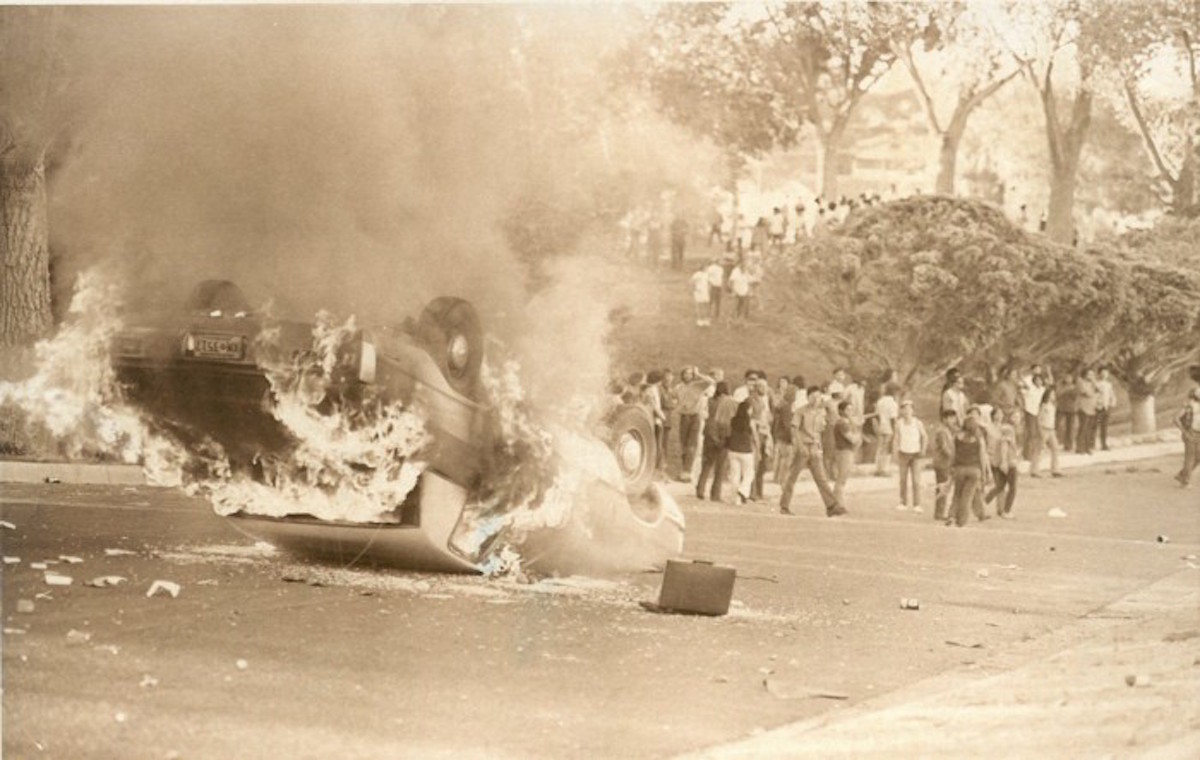 On June 13, 1971, rioting broke out at Roosevelt Park after police attempted to arrest a young man standing in a crowd of several hundred rowdy youth. A small scuffle escalated into a brawl leading officers to fire upon the crowd, wounding at least nine people. Outraged, nearly 500 youth moved into the downtown area where they overturned cars, shattered windows, looted and severely damaged and destroyed buildings. Police attacked rock- and bottle-throwing protesters with tear gas but were overwhelmed. The New Mexico National Guardsmen came into the city to assist officers. After two days of rioting, the city tallied over $3 million in damages. Shocked by the level of carnage, one journalist of the Albuquerque Journal wrote, “It was something you’d think couldn’t happen in Albuquerque, but it did.”

Unlike the riots in Watts in 1965 or Detroit in 1967, Albuquerque lacks the evocative label of 1960s urban uprising. The actors were primarily Mexican-American, and the riot occurred in the summer of 1971. Despite these anomalous characteristics, the rebellion was one of at least 14 Latino urban riots that occurred that year.

This year marks the 45th and 50th anniversaries of at least 17 Latino urban riots. These incidents have happened at least 57 times since 1964, but they are remembered in isolation. Preserving this history is crucial because the issues that sparked them, such as municipal neglect, discrimination and poverty, still exist in many communities around the country. Sadly American political culture portrays Latinos as recent arrivals, which makes it appear that these issues are temporary. Failure to address persistent issues in the community might increase the likelihood of another urban uprising in the near future — a plausible claim considering the incident of social unrest in Anaheim, California in 2012.

Most Americans are unaware of Latino urban riots because they fall outside of the black-white binary. Despite numerous books and documentaries about the 1960s and ’70s, these riots are rarely, if ever, mentioned. Sociologist Gregg Lee Carter published the only comprehensive piece of scholarship about the topic where he listed 43 riots in Mexican-American and Puerto Rican communities between 1964 and 1971. Nevertheless, there are some shortcomings in the list: some of the riots were melees, he missed several incidents, and they continued well beyond 1971.

I have provided an updated version of Carter’s list with hopes that people will become more interested in recovering this history and learn from it. By looking at several online newspaper databases and the works of other scholars, I included 25 additional riots. I disregarded racial violence, school and prison settings, as well as eliminated several of the incidents in Carter’s list. To determine what constituted a riot, I factored in that the event had to have at least 100 participants, result in significant property damage (destroying and/or severely damaging vehicles and buildings), and trigger a police response. With the exception of Los Angeles in 1992, Latinos were the primary actors in these riots; however, there were several incidents were whites and Blacks participated in almost equal numbers. There were numerous other incidents of civil unrest, but because property damage was minimal I did not include them. This list is incomplete because not all newspapers are digitized. Additionally, there was a discrepancy in reporting when Blacks and Latinos both rioted because some journalists reported only on Black rioters.

A glance at this list reveals some unique characteristics. Unlike Black riots of the 1960s, Latino riots occurred mostly in the 1970s, and they continued well into the early 1990s. Over two-thirds of them were in Puerto Rican communities. They occurred in major cities and in communities as small as Coachella, California, which had about 9,000 residents in 1970. Rioting broke out mostly in the Northeast. New Jersey had the most with 17 incidents.