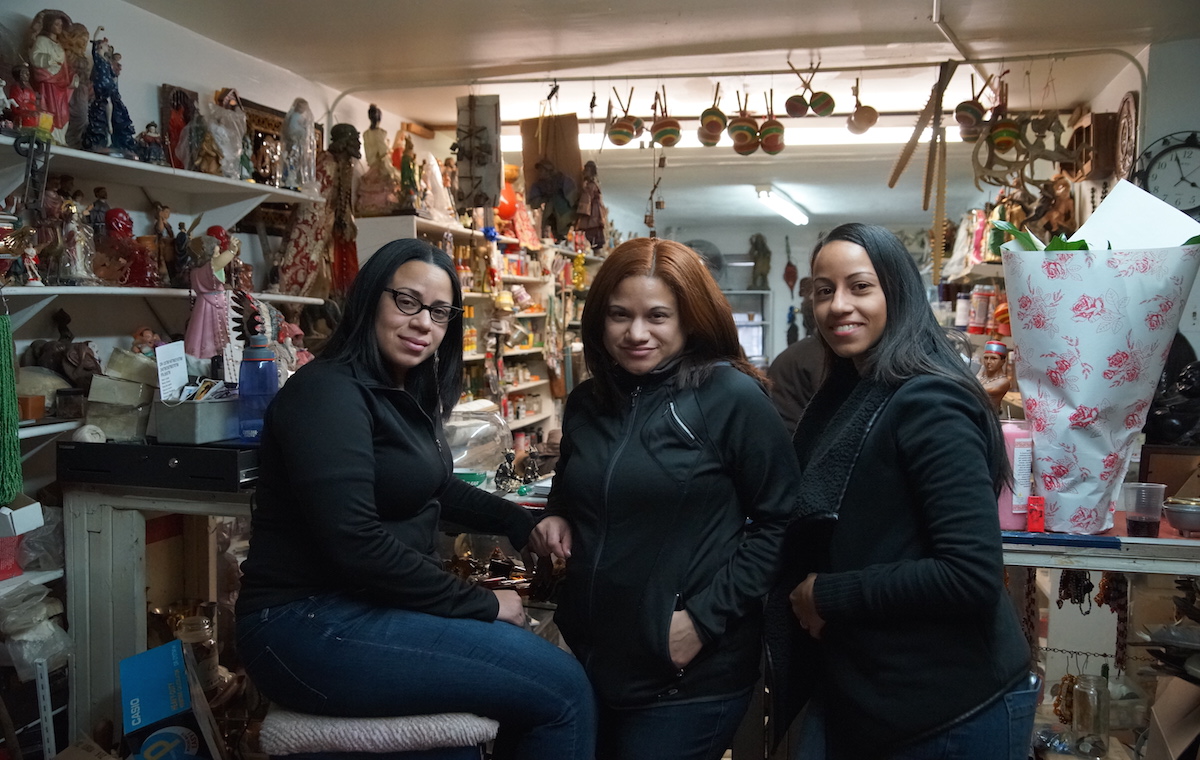 EAST HARLEM – “Close Out Sale! Everything Must Go!” read the sign out front of “Justo Botánica.” Weeks after owner Jorge Vargas’ death, his daughters began sifting through 86 years of history and disorder at their father’s store.

Changó, Our Lady of Guadalupe and countless other spiritual statues watch over as they inspect boxes of scattered receipts and seven-day candles stacked to the ceiling. Mint leaves, Palo Viejo and jars of iodine fill the fridge next to a meal that Jorge never finished.

“The business was a lot for him to carry on himself. He was getting older. Losing the original store really took a lot out of him,” his daughter Ivelisse says. “It was the community that kept him going.”

Started by Jorge’s father “Justo” in 1930, at the same location since 1954, “Justo Botánica” was displaced in 2012 when their landlord began seeking higher income tenants. The original storefront now houses a 7-Eleven. Jorge remained in East Harlem, relocating to a smaller store further up Lexington Avenue, thanks to the help of his family and community.

“We heard on the news what happened to Don Justo,” remarks a long-time patron from Mexico, now living in El Barrio. “My kids knew too.” She and her four children scan the store for what they fear will be the last time. Circling around a photo of Jorge, they begin to cry.

”I want him back,” confesses the youngest.

“He provided my family and I consult and comfort at a time when no one else would. Some people think these stores are evil. But those are the intentions people bring. You can bring those intentions to a botánica, a church, the street, anywhere. But you can bring good intentions there as well.”

“I was never scared of the botánica as a child,” recalls Jeanabel. “I remember Mom taking us to visit the store, hopping on the train and jumping up for joy when we got to 103rd and Lexington Avenue. I remember the smell of incense the minute you walked in. Papi was always busy working, behind the counter, at his lotto machine, but the minute he’d see us he’d say ,‘My babies are here!’ He’d give us gifts and let us behind the counter to play with all of the bracelets and stones, which we thought were toys at the time.”

There was one thing that did scare the daughters about the store: the backroom.

“That’s where all the secrets were,” admits Ivelisse. “That’s where he did his readings, it was all dark. You almost felt like there were spirits there. I’d even be afraid to use the restroom ‘cause it was back there.”

A group of self-professed “good witches” enter the store looking to make one last purchase. They turn their attention to an unmarked five-gallon jar behind the counter. The daughters fumble about, trying to figure out what’s inside.

Ivelisse: “Do you want a cup?”

Ivelisse: “You want the whole thing? For what?”

Jeanabel: “Um… how much are we selling this for?” she asks her sisters.

Good Witch: “Justo always used to let me have everything half off,” she says while putting a box of books and incense on the table. “I’ll take these too.”

“I never brought my friends around the store, I kept this separate, private” Ivelisse says. “Not that I was ashamed, I just wasn’t sure they’d understand the religion or the culture. It’s a very old belief. Modern, younger people don’t fully know what it was about. Herbal remedies, spiritual remedies. The old ways of taking care of healing yourself, praying, finding luck, finding love, as opposed to, prescription pills.”

Romina Dosti, a businesswoman from Albania, scans the perfume section. “Is that love honey?” she remarks bemusedly. Jorge’s daughters grab the bottle, searching for instructions that do not exist. Romina turns to Google. “It says if you put it on yourself, your man will only be attracted to you. But the message boards here are insane. They say to be careful because then he will only want you and become obsessed. Apparently it works too well.”

“No, you don’t need that,” Jeanabel says, handing her a large pink candle inscribed with a prayer on the back. “Just light this candle because love is what you want, but you don’t need something to make you wanted.”

After Justo’s passing, his wife Mercedes, like his daughters, returns to the botánica. “He’s still here,” she says while lighting Frankincense.

“I think my mom sees things differently than we do,” says Ivelisse. “The store took away the man that she secretly loved, even after divorce. My father was young at the time, prosperous at his first business. He thought he had a lot of time on his hands, the whole world. He didn’t. Years after the divorce, he’d call her everyday and she’d yell, ‘Why you calling me?’ It took him years to grow up and realize that he loved his home, he loved his kids. We were his life. I think she just wants to be with him.”

Two months after Jorge’s passing, the “final dates” have slipped into frequent ones. The “closeout sale” became a cleaning. Salsa viejia and incense still pour out onto Lexington Avenue, luring souls from all walks of life, looking for hope.

Explaining why they’ve yet to leave, Jeanabel reminds customers: “This store is what he used to help raise us. It put food on the table, it put us through school. I’m not gonna just throw it out, It’s disrespectful to him, it’s disrespectful to the community. If we could have a transition that has a happy medium, that’d be great.”

I’m sure he never thought my sisters and I would still be working the store. He’s definitely smiling down, happy that we’re there.”

6 thoughts on “One of NYC’s Oldest Businesses, ‘Justo Botánica,’ May Survive Death of Owner”