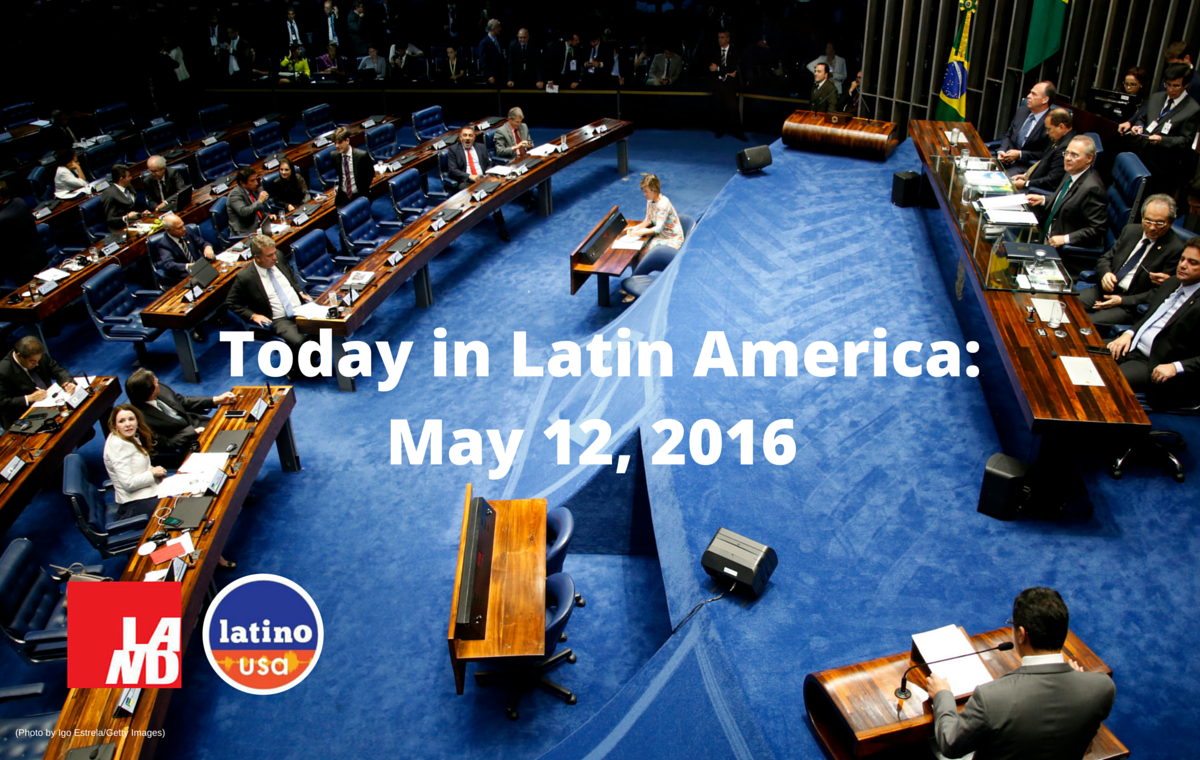 Top Story — Brazil’s Senate has voted to suspend President Dilma Rousseff and begin an impeachment trial over accusations that Rousseff manipulated the country’s budget to cover up economic troubles.

LAND’s Brazil-based editor Cleuci de Oliveira was in Brasília for the impeachment vote. Her report examines last night’s impeachment vote and the process that led to Rousseff’s suspension.

Wednesday’s 55 to 22 votes in favor of impeachment took place after a debate in the Senate that lasted nearly 22 hours. Rousseff will step down for up to six months while her impeachment trial takes place, allowing Vice President Michel Temer to take over. Rousseff is now the second out of four democratically-elected presidents to be removed from office since the country returned to democracy in 1985 following decades of dictatorship.

The vote marks the culmination of months of struggle between Brazil’s politicians, many of whom have themselves been accused of wrongdoing: Rousseff’s Workers’ Party is enmeshed in a massive corruption scandal at state-owned oil firm Petrobras; Temer is accused of violating campaign finance laws, and some of his top advisors are under investigation for corruption; and the politician who led the early effort to impeach Rousseff, former speaker of Brazil’s lower house of Congress Eduardo Cunha, had to step down amid allegations that he accepted some $40 million in bribes.

Well-known drug trafficker Rafael Caro Quintero has continued to traffic illegal drugs since his 2013 release from a Mexican prison, using his wife as an accomplice, according to a statement from the U.S. Treasury Department. Quintero had been convicted of ordering the torture and murder of a U.S. anti-drug agent and others in Mexico in 1985.

Mexico’s population of internally displaced people is growing as organized crime violence has forced thousands to flee their homes, with some estimates at over 35,000 people, according to the country’s Human Rights Commission.

The reason behind Joaquín “El Chapo” Guzmán’s transfer to another prison may have been a power outage in his wing of the Altiplano prison that had authorities worried he was plotting another escape, according to a report by a Mexican columnist citing government sources.

A bill dealing with Puerto Rico’s debt crisis that was meant to be released on Wednesday was delayed as the House Natural Resources Committee responsible for the bill continues to make “minor refinements,” though a Republican aide said the much-anticipated might be introduced today. Meanwhile, The New York Times reports Puerto Rico’s economic crisis may forecast similar fiscal woes in the U.S. mainland, as pension promises made decades ago are now coming due without the means to pay them, the painful situation economists call “deferred costs.”

The Thompson Reuters Foundation examines the major factors behind El Salvador’s high levels of violence and soaring homicide rate– such as the United States deportation of gang leaders, the aftermath of the war on drugs, and allure of gang culture– after interviewing a wide range of El Salvador’s citizens, from academics to gang leaders themselves.

Thousands of protesters maintained road blocks on 14 major roads in Guatemala, calling for the government to nationalize electricity, distribute land to the peasant class, and halt the persecution of human rights defenders, among other demands.

The office of Colombia’s attorney general announced Wednesday that it is investigating the National Liberation Army (ELN) rebel group’s top five leaders for some 16,000 war crimes and crimes against humanity allegedly committed by the group, including murder, kidnapping and forced recruitment. The investigations come in the wake of a March announcement by government and ELN representatives that they would begin peace negotiations, despite the group’s continued kidnappings and attacks on oil facilities.

In an effort to combat corruption and improve its reputation following recent scandals, Colombia’s national police force has fired more than 1,400 officers since a new general took over the force 80 days ago.

Anti-government protests in Venezuela got heated on Wednesday as soldiers responded with tear gas to the stone-throwing of demonstrators angered by the delay in the verification of the some 1.85 million signatures submitted by the opposition on May 2 in favor of a referendum to recall President Nicolás Maduro.

Some 80,000 students marched in Santiago and other cities throughout Chile on Wednesday to demand drastic education reform to rid the current system of enduring Pinochet-era characteristics.

Argentine opposition lawmakers are preparing to introduce a jobs bill which would temporarily halt private and public sector layoffs for six months, and double pensions for those who are actually laid off, a move the austerity-focused and business-friendly President Mauricio Macri is likely to oppose.