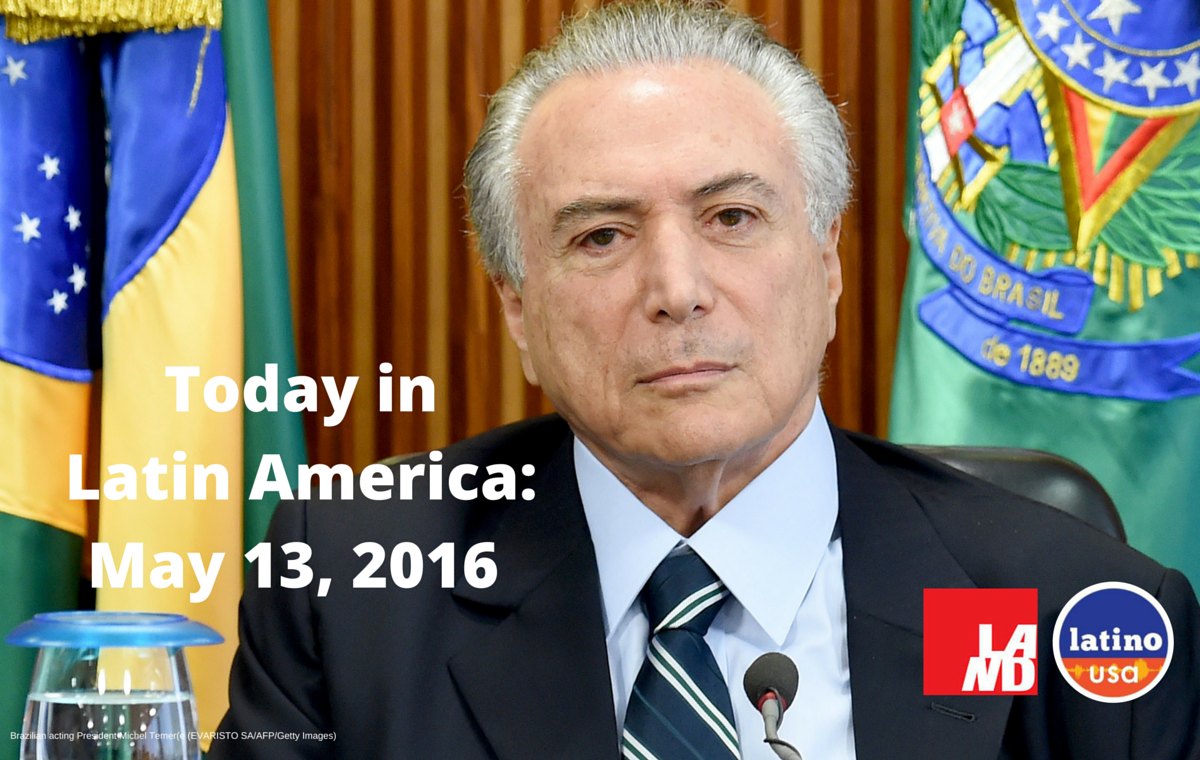 Top Story — Brazil’s acting President Michel Temer spoke of the need to restore confidence in the South American country, both among its citizens and the international community, in his first speech since assuming power on Thursday, some 12 hours after Dilma Rousseff was suspended and forced to face an impeachment trial by the Senate.

Temer introduced his cabinet during his public address, his choice of members signaling a shift to the political right after 13 years of leftist Workers’ Party rule. Almost immediately, the president’s cabinet was criticized nationally and abroad for not including any women or people of color. Bernardo Mello Franco, a columnist for leading Brazilian daily Folha de S. Paulo, described the new cabinet as the most significant ideological shift since the 1964 coup that ushered in 30 years of military dictatorship, and that the new government is “liberal in economic terms and conservative in every other respect.” At least three of Temer’s new ministers are under investigation in relation to the massive kickback scheme at state oil company Petrobras.

Beyond the demographic makeup of Temer’s cabinet, the appointment which caught the most attention was that of Finance Minister Henrique Meirelles, who will face the dilemma of trying to calm international credit markets and address a fiscal budget deficit without too harshly cutting popular social spending programs.

Protesters tried to invade the official presidential office, Planalto Palace, on Thursday afternoon as Temer introduced his cabinet. Earlier that morning, Rousseff delivered a speech from the palace, reiterating that she did not commit a criminal act and that the effort to impeach her amounted to a coup. Rousseff has 20 days to present her impeachment defense to the Senate.

Fernando Aportela, Mexico’s deputy secretary for finance, warned Thursday that if a new U.S. government were to block remittances to Mexico cooperative efforts to prevent money laundering and other financial fraud would be dealt a serious setback.

Mexico’s new ambassador to the United States assumed his position on Thursday, meeting with embassy personnel and saying he would “defend the interests of Mexico and Mexicans” as Donald Trump emerges as the likely Republican presidential nominee.

In light of the Panama Papers revelations, Mexico is stepping up efforts to combat tax evasion by requiring banks to share the names of local clients who have transactions in tax havens.

The Dominican Republic will hold general elections on Sunday with all 4,106 positions, ranging from the presidency to vice mayors, in play for the first time since 1994. Incumbent President Danilo Medina is predicted to win, though analysts differ on whether he can avoid a runoff.

Haiti’s health ministry delivered a truckload of medical supplies to the country’s biggest hospital on Thursday, through doctors said the few dozen boxes of gauze, gloves and other basic materials were not nearly enough to end a strike that has spread through Haiti’s health system. Resident doctors at the hospital have refused to see new patients since late March, saying the government does not provide them with adequate resources or compensation.

U.S. Congressman Raul Grijalva said the continued stalling of Puerto Rico’s debt bill, the release of which was again delayed Thursday morning, would result in the need to pay for a humanitarian aid package as the territory struggles to maintain basic social services.

Brazilian President Dilma Rousseff’s impeachment could have a negative impact on Cuba, reports Reuters, as the island has relied on a beneficial exchange of Cuban medical and education services for credit on favorable terms from Brazil’s leftist government.

The U.S. Department of Homeland Security announced that it is planning another series of raids that would lead to the deportation of Central American mothers and children who entered the United States illegally following Jan. 1, 2014, a proposal that has drawn criticism from both Democratic presidential candidates.

A new map produced by an international conservation agency highlights the critical role Central America’s indigenous communities play in preserving the region’s forests, data that may help leaders assert their rights to their ancestral lands.

A U.S. district judge dismissed a civil suit brought by the Central Bank of Venezuela against DolarToday, a website run by Venezuelan exiles in Delaware that publishes the exchange rate of Venezuelan Bolivars in the border town of Cúcuta, Colombia. The Central Bank alleged that the website was part of a conspiracy to manipulate the country’s currency amid escalating inflation — claims the judge dismissed “with prejudice.”

Sony Television announced the creation of a Spanish-language television show based on the life of former Venezuelan president Hugo Chávez, a decision that Venezuela’s socialist leaders fear will damage the late leader’s legacy.

The United Nations refugee agency warned, in a press release, that some 6,000 mostly indigenous and Afro-Caribbean residents of Colombia’s Western Chocó department have been displaced in recent weeks by fighting among illegal armed groups.

Argentina’s energy minister said Thursday that the government intends to stop importing light crude oil this year, using domestic refineries to limit the need for supplies from abroad. Despite its large oil and gas reserves, Argentina is a net energy importer, which has drained its foreign reserves.

Despite new reports of record inflation in Buenos Aires, the Financial Times notes that President Mauricio Macri’s government has been loaded with “Wall Street alumni,” evidence, along with a recent, successful bond issue, of Macri’s pro-business orientation.