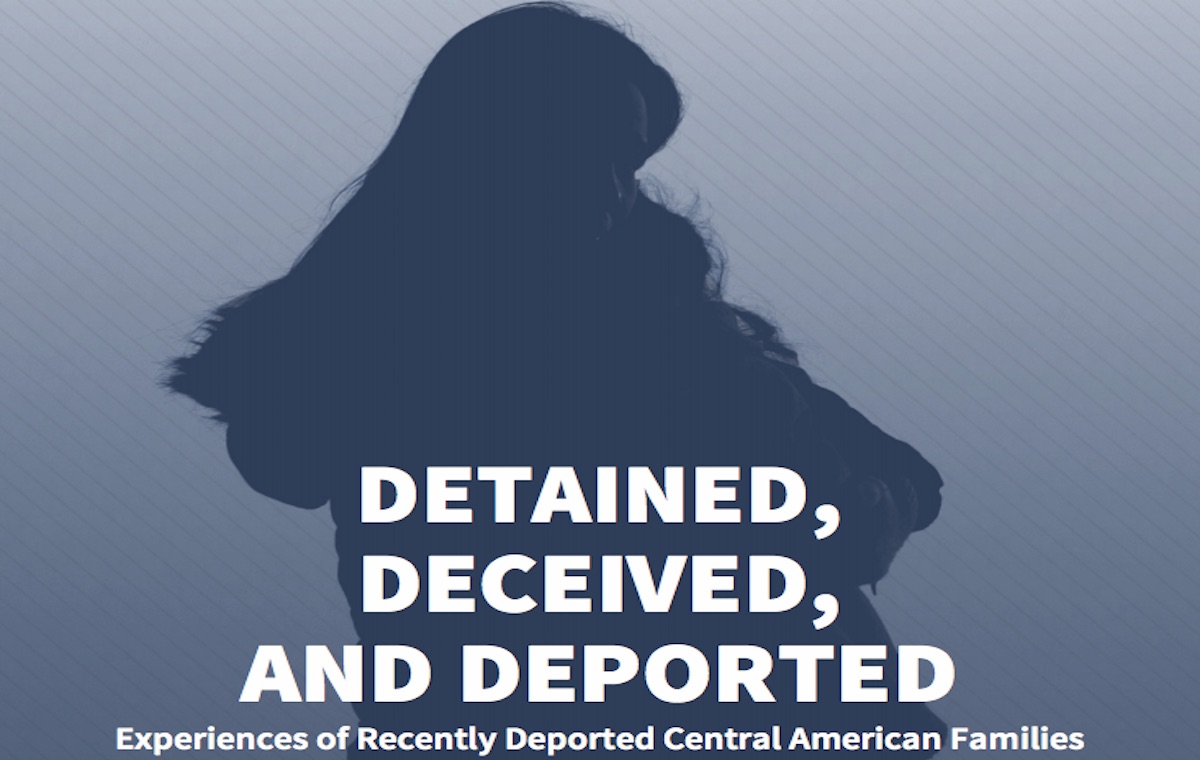 A new report released Wednesday by the American Immigration Council presents testimonies of eight Central American women and their families who have been deported to their respective countries of origin after being detained in the United States. Entitled “Detained, Deceived, and Deported: Experiences of Recently Deported Central American Families,” co-authors Guillermo Cantor, Ph.D. and Tory Johnson describe “how women are living in hiding, fear for their own and their children’s lives, have minimal protection options, and suffer the consequences of state weakness and inability to ensure their safety in the Northern Triangle.”

Each of the eight women interviewed share their stories: from the time they decided to come to the United States with their children to how they were detained and subsequently deported. They also explain a part of this narrative very few people are focusing on: life after deportation. Here are just some of the quotes from the testimonials (click on this link to read all the testimonials):

People [in the United States] hear things about Central Americans and they think that we come here to start trouble or to bring that delinquency here and it’s not true. We come [to the United States] to protect our families and to overcome the obstacles to have a better life. I truly hope that some kind of legal option can become available to help people who are trying to get away from threats and violence, like my family. Because we need it now more than ever. Rosa, a 36-year-old woman from Honduras

I don’t have the protection of anyone and it’s very scary. It’s extremely hard for me to be here, without the protection of my husband, without protection of my family or anyone. There are a lot of gang members here everywhere on the corners of my neighborhood…I’m always afraid that I might run into one of them and they’re going to hurt me. For now I just ask God to help me. At night I make sure that I lock the door before it gets dark and I stay inside with the kids. Gabriela, a 27-year-old woman from El Salvador

I have been hiding ever since I got back. The fact is I can’t go back anymore to live in my mom’s house because she said they have been threatening my family. I can’t go back there because if I go back there my whole family is in danger, especially my kids. My husband actually left Guatemala because he was being threatened so much, and he is now in the United States. Before I was in the detention center, they threatened my family and they were threatening us. So we couldn’t go back [to that neighborhood] now that we were deported; I have to struggle to keep my kids safe. Andrea, a 26-year-old woman from Guatemala

The report concludes by saying that “the rushed removal of asylum-seeking families raises concerns about the potential harms that these mothers and children are likely to be exposed to after their deportation. With no support available upon return, these individuals have limited chances of living a normal, safe, and healthy life.”

You can read the entire report below: