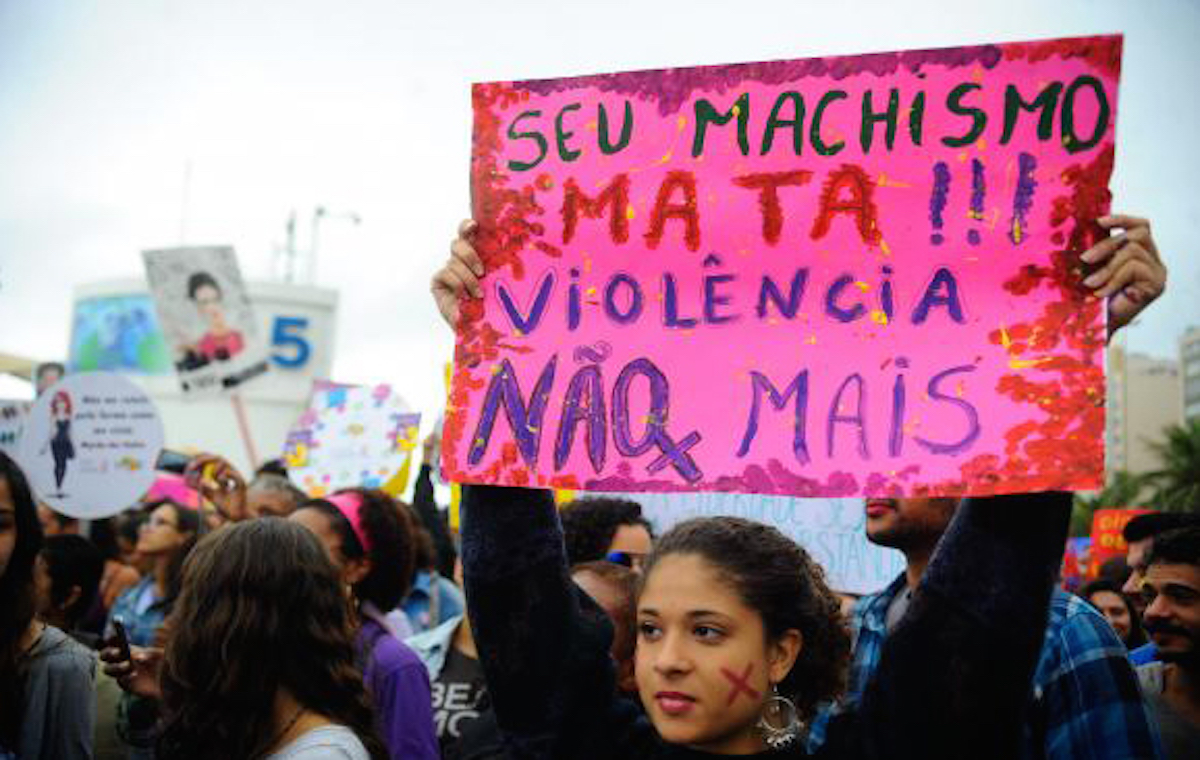 BRASÍLIA — Shortly after midnight on Wednesday, 20-year-old Michel Brasil da Silva uploaded a 30-second clip to Twitter, accompanied by the words: “They smashed the chick. Do you get it or do you not get it? lol”

The clip showed an undressed, unconscious woman lying on a bare mattress. She was being filmed by two men, both fully dressed, who took turns manhandling and mocking her.

“This one just got knocked up by 30 guys,” one of them says.

“Check out the state she’s in. Bleeding,” says the other, directing the camera toward her visibly injured genitals. At one point, the man positioned his head next to the unresponsive woman’s buttocks, stuck out his tongue, and took a selfie.

The footage set off a firestorm on social media and brought national attention to the reported gang-rape of a 16-year-old by as many as 33 men in Rio de Janeiro over the weekend — a crime the police had no knowledge of until social media users contacted them en masse.

Rio de Janeiro’s Public Prosecutor’s Office had received some 800 tips within hours of the short clip and selfie going online, according to news site G1. By Wednesday evening, the Prosecutor’s Office had launched an investigation and said it had identified the victim. In herstatement to police, obtained by Brazilian magazine Veja, the minor said that she’d met up with Lucas Perdomo Duarte Santos, a 19-year-old classmate she’d been dating for three years, at his house around 1 a.m. on Saturday. They were alone, according to the victim.

The next thing she remembers, she said, is waking up on Sunday. She was naked, drugged, and surrounded by 33 armed men, in a house she did not recognize.

The acts recorded in the video occurred one day after the reported gang-rape of another teenager — a 17-year-old allegedly victimized by five teenagers she knew, in the northeastern state of Piauí.

The confidence with which the Rio suspects boasted about what had just taken place, coupled with their decision to not only record, but disseminate, incriminating evidence, has prompted a vigorous discussion here about sexism, violence against women and impunity.

“This case has rattled Brazilians,” said Vanessa Dios, a researcher at the Brasília-based feminist institute Anis. She added that the irrefutable visual proof has kept more familiar responses to rape cases in Brazil from taking hold, such as “I don’t think that’s what really happened,” and “the girl is probably exaggerating.”

“Even so,” Dios said, “many people responded to the footage with justifications” that the victim had brought this on herself. “The day-to-day culture of codifying women’s bodies persists in Brazil. They are constantly given signals to what constitutes acceptable behavior. Among men, the notion that they are allowed to touch and grab women without permission endures.”

By the time his Twitter account was suspended, Silva had already retweeted a deluge of replies to his uploaded video — a characteristic one being, “They wrecked that one’s body hahahahahahahahaha the train ripped her hard.” In response to those who told him to take the footage down, Silva wrote, “People see worst stuff in this [expletive] and don’t complain. Just because I posted the chick’s video they now wanna talk crap. [Expletive] it… The video stays. If it bothers you, don’t follow me.”

Silva did not respond to several attempts to reach him by phone. A Facebook profile widely attributed to him by social media users who have attempted to crowdsource information about the crime has been taken offline.

On Thursday, Cybercrime Police Department Sheriff Alessandro Thiers lodged a judicial request to have four suspects arrested, Veja reported. The magazine names them as Silva, the 20-year-old who uploaded the video, Marcelo Miranda da Cruz Corrêa, 18, who also circulated footage of the crime, Raphael Assis Duarte Belo, 41, who allegedly appeared in the clip and took a selfie with the victim’s body, and Santos, the victim’s romantic interest, whom police suspect of direct involvement in the gang-rape.

“What we have in Brazil is a cultural stew of sexism and sexual violence,” Congressman Marcelo Freixo, president of the Human Rights Commission of Rio de Janeiro, said in a telephone interview. According to Freixo, Rio de Janeiro registered 4,725 rapes in 2014 — an average of 13 per day. “We can’t say that we live in a democratic country with rates of sexual violence like these,” Freixo said. “We’re talking about a city that’s about to host the Olympics.”

Freixo on Wednesday accompanied the victim to her first medical exam since the attack. He later announced that the commission will monitor the investigation and make sure that the victim receives psychological support.

“It’s a systemic issue, not confined to one economic class or the other,” he said, regarding rape cases across the country. “And there are politicians who get elected thanks to hate speech.”

Though Freixo didn’t mention him by name, Congress Jair Balsonaro, who represents Rio, has built a reputation for spouting off avowedly anti-feminist and anti-LGBT comments. In 2014, Balsonaro told a fellow congresswoman that he’d never rape her because she didn’t deserve it. In April, he dedicated his vote in favor of impeaching now-suspended President Dilma Rousseff to her “boogeyman,” the colonel who oversaw the torture she endured as a young activist during Brazil’s dictatorship.

Bolsonaro was the most-voted Rio de Janeiro candidate for congress in the 2014 election.

On the same weekend that the Rio teenager was reportedly gang-raped, a 17-year-old girl was found bound and gagged in Bom Jesus, a city in the northern state of Piauí. The victim and the suspects — five teenage boys — knew each other, and socialized on the night of the attack. The crime in Piauí came almost a year to the day after a similar tragedy stunned the state: four teenage girls were gang-raped, beaten and thrown off a cliff. One of them died.

But news of the Rio and Piauí crimes reverberated across social media on Thursday. On Twitter, the hashtag #EstuproNuncaMais (#RapeNeverAgain in English) trended worldwide. On Facebook, São Paulo-based artists Luciana Fernandes and Beatriz Rezende mobilized feminist circles and created Por Todas Elas (For All the Women, in English), a mass protest group with demonstrations now scheduled across five cities.

On Thursday evening, in a Facebook page widely reported across Brazilian media to belong to the Rio victim, she wrote, “Thank you for everyone’s support. I had honestly expected that I’d be judged harshly.”