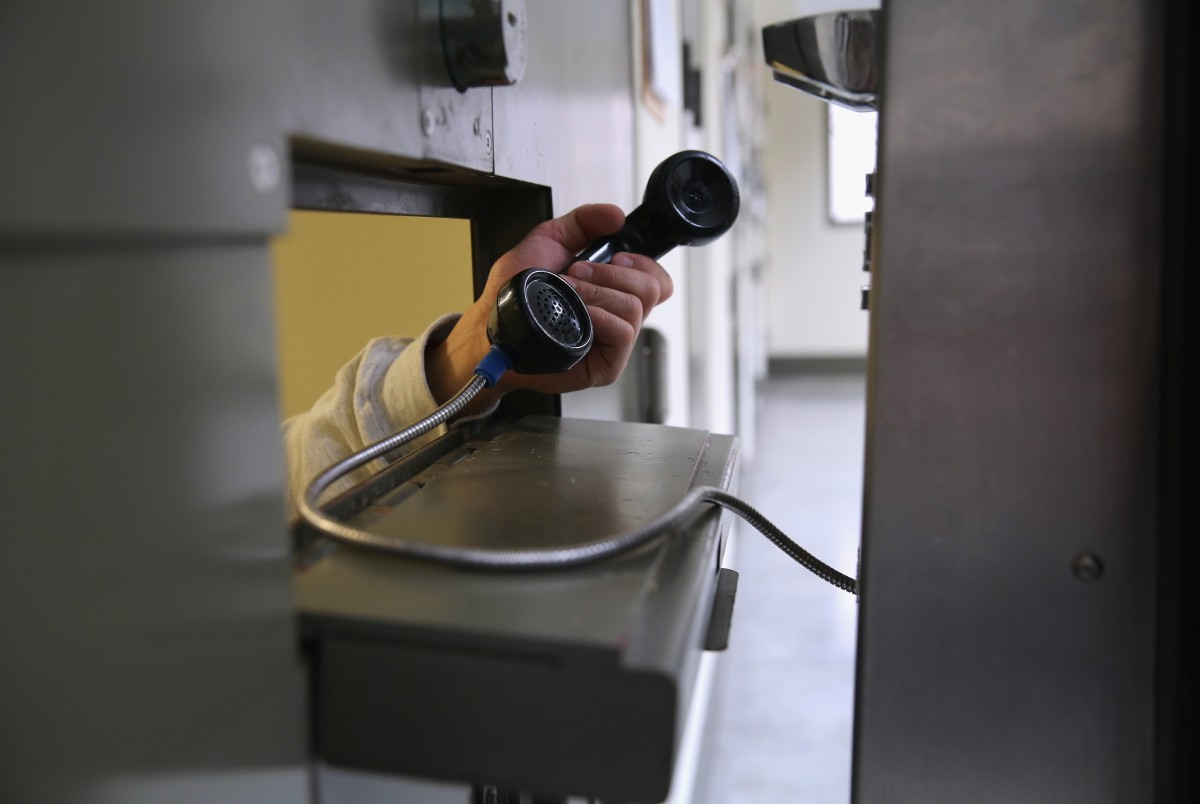 An immigrant makes a call from his 'segregation cell' at the Adelanto Detention Facility on November 15, 2013 in Adelanto, California. (Photo by John Moore/Getty Images)

The American Civil Liberties Union (ACLU) of Northern California is praising a class-action settlement with U.S. Immigration and Customs Enforcement (ICE) that would give immigrants detained in four detention centers the ability to use functional phones to contact their lawyers, families and government agencies, according to a ACLU media release.

On Tuesday, the United States District Court of the Northern District of California published the 47-page settlement decision and agreement (below) in the case of Lyon v ICE, a 2013 ACLU complaint saying that ICE’s “inadequate telephone access” had violated “the rights of ICE detainees to a full and fair hearing under federal law and the U.S. Constitution.”

As a result of the settlement, the ACLU release said that ICE had agreed to the following:

The four detention centers who would implement these changes are three county jails (Contra Costa, Sacramento and Yuba) contracted by ICE and the Mesa Verde Detention Facility, a privately-run detention center in Bakersfield.

“When people are locked up on immigration charges, they deserve access to a working telephone. The Constitution and basic fairness demand it,” said Julia Harumi Mass, a senior staff attorney at the ACLU of Northern California. “That phone is their lifeline, their hope for defeating the charges against them and establishing their legal rights to continue their lives in the United States.”

The release also mentioned the story of I.P.:

…49-year-old man who came to the U.S. from Mexico at the age of 5, was detained after being pulled over for a traffic violation. He spent months locked up because he couldn’t access legal help, largely due to the inadequate phones. The phone system had a series of complex instructions and codes for dialing that rarely worked. It also disconnected when a caller reached any kind of automated message or prompt. I.P. wrote letters to 15 attorneys and attempted to make dozens of calls before he was finally able to find a lawyer.

“Making phone calls was expensive, difficult and frustrating. Each week, I’d see people give up and sign their deportation papers because they couldn’t reach anyone,” said I.P., who asked to remain anonymous because of the sensitivity of his ongoing case. “Many of the men in detention had families and couldn’t afford to wait the weeks it took to make phone calls, so they just surrendered.”

“Because of this settlement, thousands of immigrants in detention will be able to use the phone to regain their freedom and go home to their families,” said Carl Takei, a staff attorney at the ACLU’s National Prison Project. “But far too many of them should never have been locked up in the first place. ICE sends massive numbers of immigrants into detention and exposes them to brutal confinement at a cost of $2 billion per year to American taxpayers.”