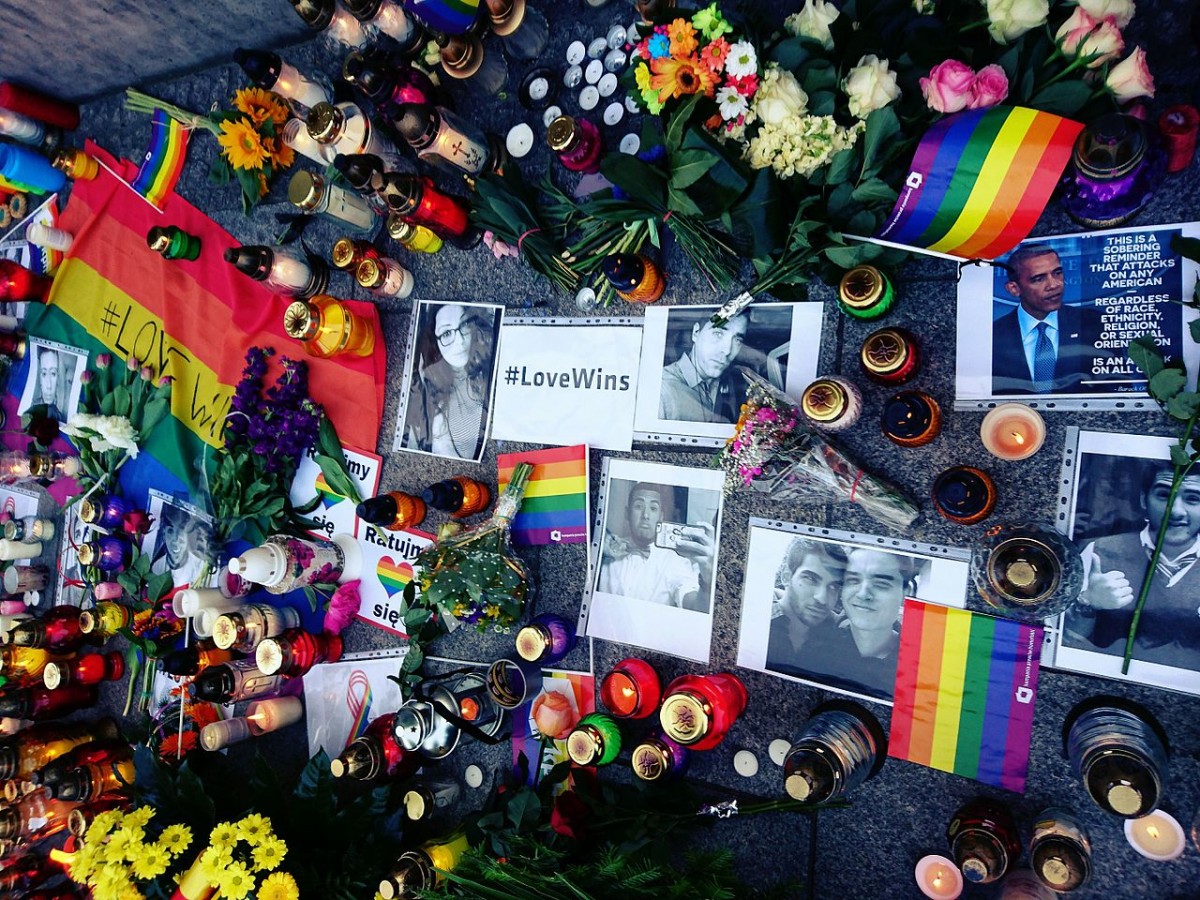 Memorial in Warsaw, Poland, for the victims of the Orlando Massacre (Photo by MiłośćNieWyklucza)

This afternoon I got an email from writer Roy Guzmán about a poem he published in Public Pool about the Orlando Massacre. I emailed Roy to ask him if LatinoUSA.org could republish this poem and he said yes, as long as we linked back to Public Pool. Here is Roy’s poem:

to sing. The rapture in a stranger’s eyes / a candid take on resurrection.
You visit Orlando to fantasize about the childhood you didn’t have /

buying a timeshare by mistake / not really by mistake / but by my illusion
that my parents worked themselves sick in the U.S. so they needed

had to go into early retirement. Our mothers gave us names
so we would know what goes at the head of a tombstone / bare précis /

to mislay our moisture on others’ necks. & just the night before I went
out for Drag Night at Lush with four other poets / one reason to escape

teeth are black it means you picked the right bottle of Sauvignon /
that in our video games one can ride a bullet toward eternity.

My partner is asked to sing at the vigil in Loring Park. His choir
has commissioned an hour-long piece inspired by David Levithan’s

Two Boys Kissing / in which a pair of teenagers participate in a kissing
marathon to set a new Guinness World Record. A Greek chorus of souls /

who won’t be vanquished by the epidemic / find comfort narrating the tragic
but true events. How can I sing for an entire hour about that much grief

without breaking down during the performance? my partner asks me
as I scroll through the news. On the phone / my mother says the shooter’s

at least once for us to be gone / No eres mi hijo maricón. In Bayside
I held an old lover’s hand before I moved away to college / the moon upon

you rank as necessary pain that trained you when to open up & shut
like a house with only hurricanes moving through it / or hasty promises.

Orlando like an orange / now green with mold / but still edible for some.
The evening of the shootings / after dinner with friends who grieve

as they are added to the list / like faces from a river of baptism. I forgive
the earth for not turning its neck further / for not allowing those pink lights

to keep flashing / for the cackles to remain intact no matter how boisterous.
In those seconds when their skin has never beamed so bright / so self-

walks in / another eagerly awaits the last call of the evening. It would seem
the record wants to keep spinning while we wipe their blood from the floor.

For them we learn to touch again. For them we walk home / & we are safe.

3 thoughts on “Restored Mural for Orlando: A Poem by Roy Guzmán”