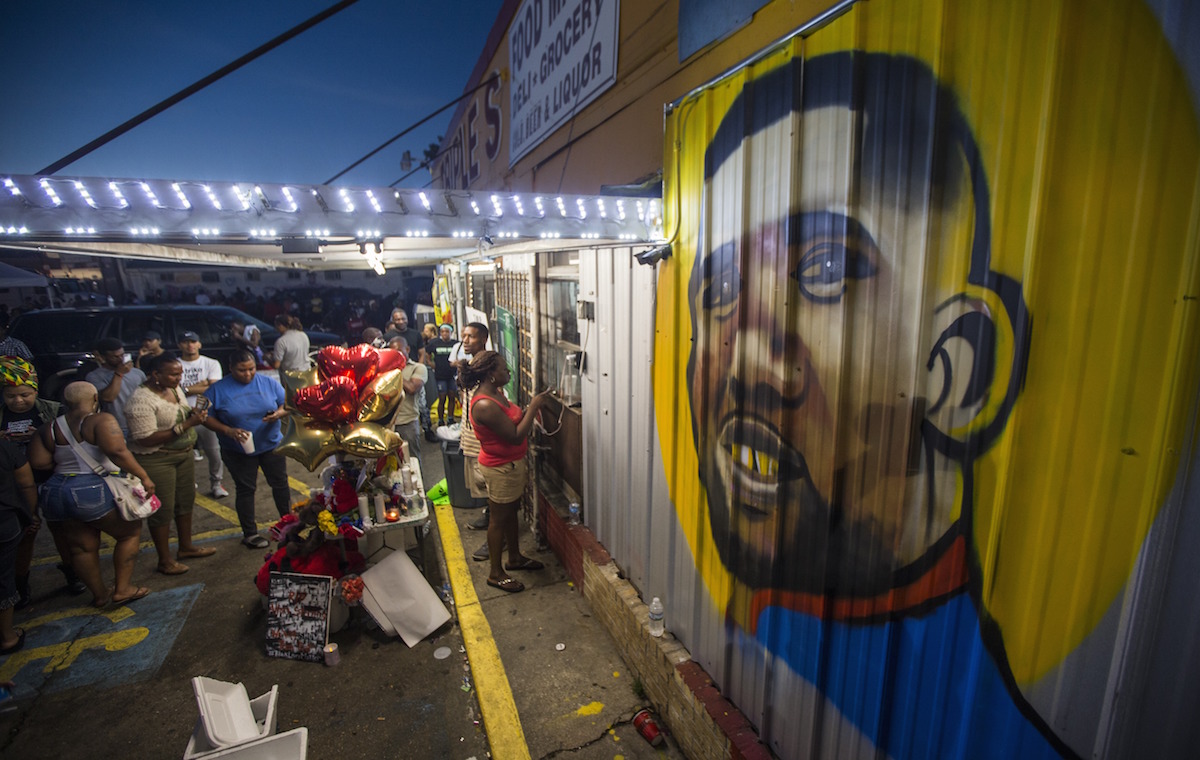 Protesters gather in front of a mural painted on the wall of the convenience store where Alton Sterling was shot and killed, July 6, 2016 in Baton Rouge, Louisiana. (Photo by Mark Wallheiser/Getty Images)

EDITOR’S NOTE: The opinions expressed in this piece are solely those of the author. A previous version of this opinion piece was published here.

American policy is broken in more ways than one. Refusal of American politicians to compromise represents further damaged systems. Moreover, police officers are the enforcers of law that isn’t always just. Ask yourself: what entry-level position carries more power than a police officer? When you factor in the granted rights of discretion and all of the stress of the streets, any police officer is potentially a ticking time-bomb, at any moment. And just like immigration policy is broken, a system that allows police to kill citizens with impunity must be changed.

Already I’ve lost or tuned out a population of people who don’t want to hear their precious police culture dismantled.

One of the worst aspects of this whole thing is that there’s a population of people in this country who aren’t even listening. They don’t want to listen nor accept that there’s a systemic problem. There’s a population of people in this country that are angry that #BlackLivesMatter even exists. Worse yet, for those who aren’t willing to open their minds—those same individuals are developing a scorn and annoyance with those that are woke; and the ignorant are turning to the other side. Our continued cries for justice are creating stronger police supporters, Donald Trump voters, and further divisions in an already polarized country. They’re the first ones to question what Alton Sterling was doing in the first place; they’ll state how the video doesn’t show the entire story or that Sterling was threatening with a weapon. How can anyone justify this sort of execution that’s already being labeled a legal lynching?

No doubt that law enforcement has an incredibly difficult job, no one is denying that. And I’m sure there are ignorant detractors to this argument who will immediately ask, what about “Black on Black” crime? The answers to this are simple: when Black people kill Black people, they go to prison. If you haven’t noticed, we have a nation full of the incarcerated. When police officers—officers who are sworn to protect and uphold the law—kill Black people, they get off. We’ve seen it time and time again. And we wonder why our children are filled with so much rage. Distrust in the system. How can any nation, a nation that touts that it’s governed by law, allow this practice to occur?

The pressure should continue to be applied to the system that lets these cops walk free.

Already, I know, there are policies and procedures in place to make officers think twice about using their guns. However, how can these officers who shot Alton Sterling use their pieces so indiscriminately? The officers knew they were wearing body cameras, which were put into place to hold officers accountable to these sorts of issues. And still, as Alton Sterling becomes a hashtag, how long will it be before another Black man receives the same fate?

Not even a full 24 hours. Rest in peace, Philando Castile.

Does anyone else immediately start shaking when approached by a police officer? It’s because we, as Black and Brown men (sub-groups that are disproportionately affected by the criminal justice system as a whole), are afraid that if we make any move that could be confused for threatening—we’ll be popped.

This is all of the more reason that Latinos need to also join the efforts along with the Black community against police brutality. We’re dictated and live under the same system. We as Latinos are painted as a monolithic block consumed by immigration policy, but we in fact are so much more. What about civil rights? Police brutality is a personal issue to African-Americans, with ties to the days of slavery, just as immigration and stolen land is personal to Mexicans and the Indigenous. Mexicans have been lynched by Texas Rangers just as Blacks were attacked by slave owners and white supremacists. Blacks picked cotton and we pick fruits; what’s so different?

I’ve said it once and I’ll say it again: the difference between Blacks and Latinos is a boat stop. The same detention officers that put their hands on us are guided by the same law that allows municipal officers to do the same. We’ve both been scarred by colonialism and imperialism. The history, fate, and experience of Latinos and Blacks in this country will forever be intertwined. Our issues are more alike than dissimilar and we need to stand in solidarity with each other. Our issues are one because we’re both seen as second-class citizens in this country. The Latinx community is already woke and non-Afro Latinx & Latino individuals need to jump on board. With the world increasingly changing, different than it was say 20 years ago, and facing new challenges; how can one offer the blunt tool of law enforcement as the solution? What will give? What will it require to stop the bloodshed? Have we as a nation peaked with answers and will this violence become a moot point?

You live by giving. We need to give and stand in solidarity with our Black brothers & sisters who’ve also been taken advantage of by a brutal system of injustice. For if we don’t, how can we expect any change to occur? We can accomplish more together. And when I say ‘we,’ I’m talking to Latinos, Chicanxs, Hispanics, Dominicans, Boricuas, Mexicans, Mexicants, lo que sea; we know who we are and once we find out where we’re going, we’ll be able to make progress.

I look forward to hearing support from the Latino political establishment and the Latinx community for these individuals, their families, and the Black community.

Because something’s got to change. And we cannot remain silent.

Máximo Anguiano is an actor, athlete, creative, personality, organizer, scholar, and politico out of San Antonio, Texas. He is the Executive Director of the Adelante U.S. Education Leadership Fund and Founder of Independent Creative Services. Through various community, artistic, and educational works, Máximo’s passion and charisma bring a fresh, progressive and driven approach to changing the world. He has recently been featured with various organizations such as Voto Latino, Latino Rebels, Latino Justice PRLDEF, Texas Association of Chicanos in Higher Education, the University of Texas at Austin, the University of Northern Iowa and many more. He tweets from @blurbsmithblots.

16 thoughts on “OPINION: Latinos Cannot Be Silent to Alton Sterling and Philando Castile”